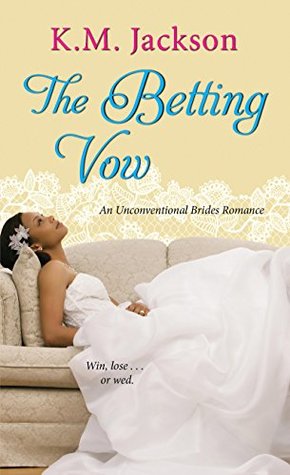 In The Betting Vow (Unconventional Brides #3) by K.M Jackson, Leila Darling is looking to make a career change from supermodel to actress, but without a way in, she'll never get a chance. So, when a bet grants her the opportunity to improve her reputation by marrying TV producer Carter Bain, she takes it. Yet, the more time she spends with Carter, the more Leila begins to see that their deal is more than business. Will the pair give their marriage a real chance, or will they go their separate ways once the six months they agreed to are up?

This series is an absolutely brilliant concept, and I have loved every book, because the main characters are well-developed and face such challenging obstacles that just make a reader want to know more about how these couples are going to achieve their happy ever after. The way this story started had me wanting to laugh at the heroine's predicament, as being a supermodel has made her jaded and determined to make a change, so the industry stops seeing her as an high-maintenance and impulsive woman that uses men then leaves them high and dry when she's done with them. Will she be able to change her career with little to no problems or will she face competition from those determined to annoy her such as one of the secondary characters that Leila has a total problem with?

As for the dialogue, it was intense, entertaining and had me loving both the main characters, as the heroine provides quite a challenge for the hero. Will the hero be able to win Leila's heart since it's palpable he wants more than an 'in name only' marriage, even though he does his best to hide his feelings from her by burying himself in work? However, the dialogue wasn't all intense. There were some really good light-hearted moments that had me amused by this couple's use of the words 'Wifey' and 'Hubby' and the way they tease each other, as they adjust to their new arrangement. Moreover, the heroine is strong, brave and I liked how determined she was to go from being a supermodel to an actress. Really, it's the best thing for her, considering what one of her exes have done that makes her out to be the bad guy when he was the one in the wrong.

While the hero, he's hard-working, determined to help the heroine in any way he can because of the bet, and I liked how he stood up to those that he'd known for years for the heroine. She's good at what she does and deserves a shot at acting, and I liked that the hero realized how good she was because she needs someone like him on her side. I also liked the close friendships he shared with his two friends, Aiden and Vin, and that they could tease each other when it came to things in their lives especially women. Yet, what I liked most of all about the hero is how he handled the moment he met Leila's family. Really, it seemed nothing phased the hero, no matter how embarrassing a situation.

Overall, Ms. Jackson has delivered a wonderful read in this book where the chemistry between this couple was fantastic; the romance delightful and did justice to this couple's intense chemistry; and the ending had hoping that the hero would do right by the heroine and that their bet and marriage wouldn't be null and void. Luckily, Carter isn't afraid to stand up to his boss; a man that's been more like a father to him than his own father. However, I liked how things worked out for the heroine when it came to her career, even though everything could have turned out differently because of what happens to her towards the end. I would recommend The Betting Vow by K.M Jackson, if you enjoy the fake relationship trope, the marriage of convenience trope, or books by authors Kianna Alexander, Tina Martin, Farrah Rochon or Rochelle Alers.

Leila Darling is past done with the supermodel thing, especially the mega-parties and high-profile flings that have done nothing but leave her alone and jaded. She’s got the talent to be a serious actress, but the industry sees her as a high-maintenance, impulsive party girl with a reputation for leaving men in the dust—especially TV producer Carter Bain.

Carter’s had his eye on Leila for years, so when a bet gives him a chance to get close to her, he accepts. With the goal of getting Leila the image makeover she needs and Carter the star he desires, the game is on. Get married and stay married for six months. If Leila lasts, she gets her pick of his A-list roles. If Carter wins, she’ll take the hot sidekick part he’s offered.

But as their “I do” turns up all kinds of heat, Leila and Carter find they have more in common than they ever imagined. Are these two prepared to put business aside and surrender the ultimate prize, their hearts?