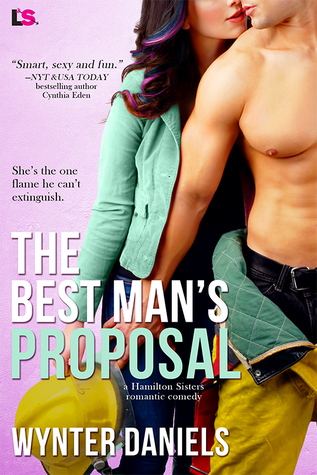 In The Best Man's Proposal (Hamilton Sisters #2) by Wynter Daniels, Niki Hamilton is determined to get the promotion on offer to move to London to work and nothing is going to stand in her way. However, she never factored in falling in love with firefighter Grant Powers, especially after she ends up agreeing to live with him temporarily when she becomes homeless. But with Grant already being burned once by a woman he loved, how can he even think about giving love another chance. Will Niki and Grant realize that love is worth fighting for, or will Niki's need for independence keep them apart?

This book's cover alone would make me want to read this book, but the fact that this story has such an enticing blurb is the icing on the cake, which had me choosing this story to read and I've got to say that this story was highly entertaining and fast-paced due to the heroine's determination to get her dream job and the hero's determination to do everything he can to help those he loves. The way this story started had me smiling at the heroine's antics, as she knows getting involved with someone isn't a good idea, not if she wants her dream to come true when it comes to the promotion she worked so hard to get. However, it seems circumstances are determined to keep the hero and heroine together after the heroine finds herself about to be homeless. Will Grant be able to help her out?

The wonderfully-written dialogue drew me into this story and had me captivated because of the main characters back stories that have them ready to move on to bigger and better things or doing what's right for family. Will they be able to find a way to be together, even if it means compromising? Moreover, the heroine is resilient, hard-working and I liked how determined she was to prove herself to her boss, even though her boss was an absolute jerk that likes to take advantage of the heroine in the way that if he said to Niki, 'Jump', she'd say 'How high', because she was desperate to get the promotion her boss kept telling her about. I also liked the close relationships the heroine had with her sister and her best friend and that she could turn to them whenever she needed advice.

While the hero, he's confident, determined to win the heroine over, and I liked how he would do anything for his family, even if it meant sacrificing everything he's worked so hard for. I also liked how tight the hero is with his family and the way his grandparents tease him when it comes to his moments of eavesdropping. Yet, what I liked most of all about the hero was how good he was for the heroine and vice-versa and how he was able to overcome what his ex-wife did to him to be able to give another woman a chance.

Overall, Ms. Daniels has delivered a wonderful and enchanting read in this book where the chemistry and romance between this couple was formidable and palpable in showing how good these two are together. The way this story ended had me cheering for this couple's happy ever after, as Grant needs Niki just as much as the heroine needs Grant. Yet, what I liked most about the way this story ended was what Niki was willing to do to be with Grant. However, it was the epilogue that wrapped this story up wonderfully because of the surprise the heroine had for the hero. It was special and showed how much she loved him. Then again, special days are to be celebrated with the effort the heroine takes to make the hero's day exceptional. I would recommend The Best Man's Proposal by Wynter Daniels, if you enjoy second chance romances or books by authors Jenna Bayley-Burke, Avery Flynn, Sarah Balance and Tawna Fenske.

Niki Hamilton had her hopes pinned on moving to Europe with her boyfriend. But then he dumped her. By text message. Just before her sister’s wedding. Left dateless in a flamingo-pink monstrosity of a bridesmaid dress, she decides to drown her sorrows in a glass of tall, dark, and handsome.

Firefighter Grant Powers has been burned by love, but when his best friend’s new sister-in-law falls into his arms—and stays there for one sexy night—he enjoys the experience a little too much.

Then a rental snafu leaves Niki temporarily homeless. So, gentleman and masochist that he is, Grant offers his spare bedroom. Despite the smoldering sexual tension between them, starting anything would be playing with fire.

Now, they just have to survive living together for a few weeks…