REVIEW: TURNED UP by ERIN NICHOLAS 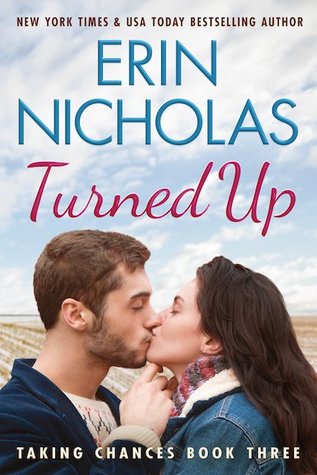 In Turned Up (Taking Chances #3) by Erin Nicholas, Dillion Alexander and Kit Darby have challenged each other to be the best ever since they were in the third grade. But ten years ago, a terrible tragedy caused these two to go their separate ways, so the guilt of what they did didn't consume them. However, now Dillion and Kit are reunited in their hometown and finding it once again difficult to stay away from each other. Can they finally get things right, so they can have the happy ever after they both want, or will they lose they best thing that's ever happened to them -- finding love with the right person?

Ms. Nicholas always finds a way to engage me with her stories and this has been a fascinating series because Chance is a town struck by tornadoes and blizzards, and where the good people of the town band together to make everything right after such a disaster. And really, no one does it better or works harder than Dillion and Kit as well as the secondary characters in their friends -- Avery, Jake, Max and Bree. The way this story started drew me in immediately, as it seems Dillion and Kit are at it again in thinking everything is a competition, Is Kit just as capable of handling an emergency situation as Dilion, even though she's a psychiatrist and he's an emergency room physician?

As for the dialogue, it was well-written, riveting and I liked the obstacles these two had to overcome on their journey to happy ever after. Such as the guilt they've both had since a terrible tragedy in their teen years and whether Dillion can get past it; and whether Kit can overcome the fact that she believes being with Dillion is changing her. Will she realize that change can be a good thing? Moreover, the heroine is sassy, resilient and I loved how the way she challenged Dillion and that the hero didn't give up on her when she was doing her best to distance herself from him. I also liked how tight she was with her friends and that they were willing to offer her advice on how happy ever after is worth it. While the hero, he's hard-working, determined to do whatever it takes to win the heroine over and I liked how he teased the heroine to get a rise out of her. So, that Kit would challenge him just as hard as he challenges her, which is proven by the dilemma they face at the beginning of the story that puts Kit one up in their competition in driving each other to be the best, Is the heroine the best, considering the emergency she helped with?

Overall, Ms. Ncholas has penned another fantastic read in this book where the chemistry and romance between this couple was explosive and where the hot romance did justice to this couple's intense chemistry. The way this story ended had me concerned for one of the main characters because of the situation they have to handle that puts them in danger, but I'm glad that everything worked out for this couple, as they're meant to be. I would recommend Turned Up by Erin Nicholas, if you enjoy the enemy to lovers trope or books by authors Melanie Shawn, Melissa Foster, Melody Grace and Jamie Beck.

Dillon Alexander has been Kit Derby’s nemesis since third grade, when he beat her in the school spelling bee. They’ve been competing ever since, driving each other to be the best at everything from science fairs to bake sales. While working together one night during their senior year, they stopped bickering long enough to share an emotionally charged kiss. But a tragedy that same night left them both racked with guilt, driving Dillon out of town and leaving Kit determined to keep her distance.

Now an emergency room physician, Dillon has returned to their hometown of Chance, Nebraska. Soon he and Kit fall back into old habits, sparring in public while trying to stay out of each other’s arms. But when a blizzard traps them overnight at Kit’s grandmother’s farmhouse, the real competition begins: Who will be the first to give in to the feelings they’ve denied for a decade?