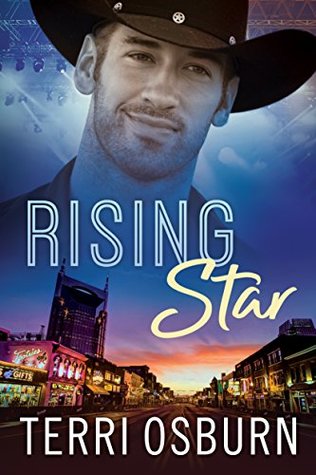 In Rising Star (Shooting Stars #1) by Terri Osburn, Charley Layton is a woman focused on her career. So, starting something with Dylan Monroe is out of the question, but spending one night with him would definitely be worth it. However, Charley didn't expect to see Dylan again, and when she discovers he's the guest act on her radio show there's no way she can ignore him. Yet, when Dylan's dream starts to become a reality and he finds himself a star loved by thousands of fans, will he and Charley's relationship survive or will Dylan lose the woman that he wants forever after with?

Ms. Osburn is a wonderful author and her books are a real treat to read, and this story starts off her Shooting Stars series brilliantly. Because it's a story about how a one-night stand can lead to so much more, encompasses two compelling main characters that I loved from start to finish, and riveting dialogue that had me reading quickly, determined to discover whether the heroine will be able to handle the lifestyle of an up and coming country star. The way this story started drew me in immediately, as the opening line was totally amusing and I wanted to know whether a certain secondary character would get her wish in seeing a certain male body.

As for the dialogue, it was intense due to the main characters back stories and I loved every moment the hero and heroine conversed. Both are determined to focus on their careers with Dylan becoming more and more popular as a country music artist and Charley becoming more and more popular as a radio host. Will their relationship survive when Dylan's popularity skyrockets to the point where he doesn't have much time to spend with the heroine? Will Charley be able to handle the women that throw themselves at the hero? Moreover, the heroine is strong, brave, independent, hard-working and I liked how determined she was when it came to her career. I also liked how Charley stood up to her friend -- the man-hater -- when the woman was so determined to write Dylan off like all the men that have ever disappointed her, even though Dylan is a good guy that would do anything for Charley. Yet, what I liked most of all about the heroine is her friendship with Elvis, one of the secondary characters, and that he would do anything to protect her from getting hurt. In other words, Dylan better watch out.

While the hero, he's been through a lot already when it comes to his music career, but hopefully now things are finally starting to come right for him. Furthermore, he's confident, hard-working and very determined when it comes to winning the heroine's heart and doing everything he can to succeed in his music career now that he's been given the opportunity of a lifetime. I also liked that he wasn't afraid to go head-to-head with the secondary characters that were determined to protect the heroine when it came to their relationship. Will he win Elvis and Charley's roommate over? Yet, what I liked most of all about the hero is the decision he made towards the end that would be most beneficial for him as well as the heroine, especially since someone was determined to make trouble for this couple's relationship.

Overall, Ms. Osburn has delivered a remarkable and smoking hot read in this book where the chemistry between this couple was instant and intense from the moment they met; the romance was delightful and had me cheering for this couple's happy ever after; and the ending had me loving how far the hero was willing to go to win back the heroine. Certainly, a face-off with one of the heroine's friends wouldn't be easy, especially considering the person's past career. However, it was the epilogue that wrapped this story up perfectly, because of how far Dylan has come in his career, which is proven by the surprise announcement when it comes to his talent. I would recommend Rising Star by Terri Osburn, if you enjoy the surprise pregnancy trope or books by authors Jaci Burton, Melissa Foster, Marina Adair and Catherine Bybee.

Can love survive the bright lights of fame?

A popular DJ at the hottest station in Nashville, Charley Layton is doing what she’s always wanted to do: living in the heart of country music. Charley puts her career first and relationships second, but when a charismatic stranger in a black cowboy hat invites her back to his place, she decides to give herself one night of no-strings fun.

But Dylan Monroe isn’t a no-strings kind of guy. Charley is beautiful, brainy, and brassy as hell—the kind of girl he’s always wanted. When his record label books him an interview on Charley’s show, he’s determined to find out why he woke up alone, and when he can see her again.

With Dylan now the most eligible bachelor in country music, Charley doubts their fling stands a chance, but she’s willing to try. Dylan dreams of fame, but he also craves a life offstage with Charley. Can he convince her that both of their dreams are worth chasing, and that love is still possible, even in the spotlight?