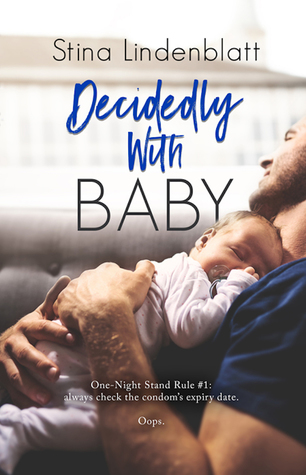 Decidedly with Baby
By the Bay #2
By Stina Lindenblatt
Releasing September 12th, 2017
Self-Published

In Decidedly with Baby (By the Bay #2) by Stina Lindenblatt, there's only one thing Holly is determined to focus on and that's her job, but when she has a one-nght stand with playboy Josh Hoffer, she finds she gets more than she bargained for when she discovers she's pregnant. Will Josh step up, so they can achieve the happy ever after they both deserve; or will their pasts keep them apart?

What an exhilarating, fast-paced, riveting read Ms. Lindenblatt has penned in this book, which encompasses the surprise pregnancy trope; two engaging characters that have fascinating back stories that make them fear forever after; and wonderful dialogue that had me enjoying the fast-paced storyline due to the obstacles these two face on their journey to happy ever after. The way this story started had me wanting to laugh at the heroine's reaction to the dilemma she's facing, as she's got some big decisions to make. What will she do? Yet, what I liked the most about the beginning is how the story began in the present and then flipped back to the past, as it gave me more knowledge of the hero and heroine and how good their friendship is.

As for the dialogue, it kept me entertained from start to finish due to the main characters back stories, their reactions to the pregnancy, and the obstacles they face on their journey to happy ever after including what happens to the hero when it comes to his career. Moreover, the heroine is strong, brave, hard-working and I loved how determined she was to do what was right by her baby. Will she let the hero into her life? Will the hero accept responsibility as the baby's dad? I also liked how the heroine deals with her family, especially her mother; a woman determined to push her daughter towards a future that Holly would do anything to avoid. Then there's her brothers that absolutely charmed me with their love for Holly and the way they tease her. Yet, it was the way they treated Josh that had me smiling, because of their teasing and their protectiveness when it comes to their sister. While the hero, he had it tough growing up with an absent father that's made him want to avoid relationships for fear he wouldn't stick around like his old man. I also liked how kind and caring the hero was and that he would do whatever it takes to prove to the heroine that he wants to be a part of her and the baby's life. Yet, what I liked most of all about the hero is his determination to win the heroine over.

Overall, Ms. Lindenblatt has penned a really good read in this book where the main characters kept me entertained from start to finish due to their growing relationship and where their chemistry and romance was strong and wonderful. The way this story ended had me smiling because of the decisions the hero makes when it comes to his career and proving to the heroine that he wants her in his life. However, it was the epilogue that wrapped this story up wonderfully because of how happy Josh and Holly are together. I would recommend Decidedly with Baby by Stina Lindenblatt, if you enjoy the surprise pregnancy trope or books by authors Harper Sloan, Lili Valente, Jana Aston and Heidi McLaughlin.

Career-orientated Holly Whittaker has a plan, and being a mom is not part of it. Her not-quite-a-fairytale childhood involved being brought up by thirty nannies (yes, thirty!), so what the heck does she know about being a mom anyway?

Playboy Josh Hoffer has no room in his life for a family or steady girlfriend. His hockey career comes first. Life is tough when you’re on the road more times than you’re not. Besides, what does he know about diapers and baby yoga and fairytale princesses?

After Holly receives some unexpected bad news, she’s looking to blow off a little steam, and hot sex with Mr. No Commitment himself fits the bill just fine. But sex is never without consequences, and this time it’s more than her heart that is at stake. This time, Mr. No Commitment and Ms. Career need to figure out what’s really important to them and find room in their heart for another—plus one.
Warning: Contains naughty texts, shower sex, and enough profanities to fill an oversized swear-word jar.