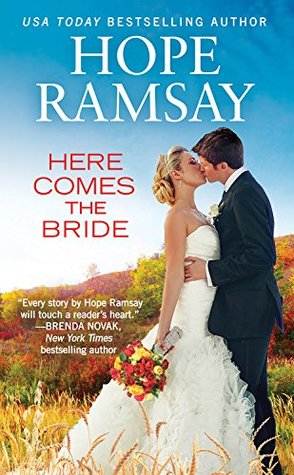 In Here Comes the Bride (Chapel of Love #3) by Hope Ramsay, walking down the aisle to marry the man she loves was supposed to be the happiest day of Laurie Wilson's life, but when the groom leaves her standing at the altar, she decides to take his words to heart and date other people. However, the more time she spends with the best man, Andrew Lyndon, the more she finds herself realizing that the groom may have done her a favor by calling things off. Will she give Andrew a chance or will the man she was going to marry be able to convince her that he wants her back?

What a thoroughly entertaining, fast-paced, wonderful read Ms. Ramsay has penned in this story that had me hooked from the moment I started reading, as the heroine is completely blindsided because she thought that her groom loved her as much as she loved him. However, it was from the moment Andrew helps Laurie that had me hoping the heroine would realize what a blessing she's been given, as it's palpable the hero is determined to do whatever it takes to help her.

As for the dialogue, it was compelling and had me absolutely loving the main characters back stories, as Andrew knows what it's like to be blindsided by someone he loved, so he's the perfect person to be able to help Laurie overcome the rejection she's suffered. Moreover, both the main characters were enchanting and I really liked how resilient and courageous the heroine was when it comes to moving forward and seeing if dating other people would be worthwhile. However, in saying that, I felt sorry for her when it came to the secondary characters and the fact that everyone had an opinion on who she dates that isn't all that positive. Will they understand her need to try and pick up the pieces of her life and move on?

While the hero, he's confident, worked hard to where he's gotten to in his career and I liked that he sided with the heroine instead of siding with his best friend. I also liked how the hero dealt with his family when they were annoyed by the decisions he made that they didn't agree with. Those moments had me cheering for the hero and thinking how great of a guy he was. Yet, what I liked most of all about the hero is his determination to help the heroine, even though it seems he may have an ulterior motive. Is the hero using the heroine for his own personal gain when it comes to his career?

Overall, Ms. Ramsay has penned a delightful read in this book where the chemistry and romance between this couple was wonderful and the ending had me cheering for this couple's happy ever after, because of what the hero does to ensure that he's the one the heroine ends up with. However, in saying that, I just wished that there had been an epilogue to wrap things up a bit more and give me -- as a reader -- the knowledge of whether the hero got his wish of how he wants their relationship to go to cement their forever after even more. Do they get married? I would recommend Here Comes the Bride by Hope Ramsay, if you enjoy the revenge trope or books by authors Lori Wilde, Emily March, Debbie Mason and Catherine Bybee.

For Professor Laurie Wilson, planning her wedding to longtime boyfriend Brandon Kopp has been a whirlwind. But somehow, between all the cake tastings and dress fittings, she never imagined being left at the altar. In the aftermath, she does what any sensible woman would - she swigs champagne and considers keying his car. Until someone knocks on her door with a much better idea for revenge.

Best man Andrew Lyndon thinks Laurie's better off without Brandon. But Laurie's father - and Andrew's boss - isn't going to accept anything less than a reconciliation. And he's made it Andrew's problem to solve. So Andrew decides to make Brandon jealous by setting Laurie up on a string of "dates." After a couple of weeks, Brandon will be begging Laurie to take him back. But Andrew's plan works a little too well because suddenly he's the one falling for Laurie -- and planning a proposal of his own.