REVEW: ALONG CAME A RANGER by DEBRA HOLT 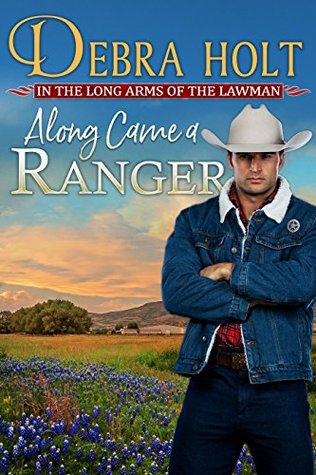 In Along Came a Ranger (Texas Lawmen #3) by Debra Holt, being stuck in an elevator is not Stacy Smith's idea of fun, but at least she has great company to lessen her fear. However, Stacy has a rule about not getting involved with cowboys and that's exactly what Davis McKenna is, even though he's also a Texas Ranger determined to protect the innocent and punish the guilty. Will Davis be able to convince Stacy to take a chance on him or will her past demons keep the pair apart?

The first two books of this series are absolutely fantastic reads, but this book is the best by far. Because it encompasses two mesmerizing characters that find they're drawn to each other, but with the heroine's past when it comes to cowboys due to her mom and relationships, there's no way they could possibly have a chance, even though there's more to Davis than being a cowboy. He has a respectable job as a Texas Ranger and is a law enforcement officer willing to go above and beyond the call of duty, which is proven during a tough case.

As for the dialogue, it was well-written, enthralling and I loved the main characters backs stories that make the heroine think that getting involved with a cowboy isn't a good idea, because of all the ones her mother dated that proved unreliable including her father. However, in saying that, I liked how the hero won Stacy over and showed her he was different, even if it meant that their relationship never progressed further than friends. Furthermore, the hero is confident and I loved how willing he was to help the heroine when it came to her writing. Yet, what I liked most about the hero is his dedication to his job and how far he's willing to go to see justice served, which is proven by what happens with Stacy and a dangerous situation.

While the heroine, she's strong and brave with everything she's gone through in her past and the way she handles the obstacles that this couple need to overcome to be together, especially the moment where she does something that could get her hurt or worse. I also liked that she was willing to give the hero a chance, even though she doesn't have a high opinion of cowboys. Yet, what I liked most of all about the heroine is her love for her career as a romance writer and the success she'd had that makes her popular with her fans.

Overall, Ms. Holt has delivered an incredibly enchanting read in this book where the chemistry was wonderful; the romance passionate and had me liking when the heroine gave in to the hero; and the ending had me loving the hero more than I already did, because he isn't willing to give up on the heroine and their happy ever after no matter how many times she rejects him. However, it was the epilogue that wrapped this story up perfectly, because this couple are meant to be. I would recommend Along Came a Ranger by Debra Holt, if you enjoy the enemy to lovers trope, the opposites attract trope, or books by authors Elle James, Ann B. Harrison, Michelle Beattie and Katherine Garbera.

No cowboys allowed. That is Stacy Smith’s motto. Having overcome a rough childhood, she vows to not repeat the same mistakes that her mother made. Writing bestselling romance novels as Sabrina Noelle, she is happy to stay in her ivory tower, creating perfect worlds for her heroes and heroines that keep her busy and her heart whole.

Texas Ranger Davis McKenna handles crisis situations on a regular basis. But when he is stranded in a hotel elevator with a gorgeous woman on the verge of panic, he soon realizes that there’s more at play than just his protective instincts.

Take one determined Texas Ranger and one equally stubborn romance author and there is bound to be a showdown at high noon where desires and hearts are concerned. Can Stacy risk opening her heart to the man who represents everything she never wanted?