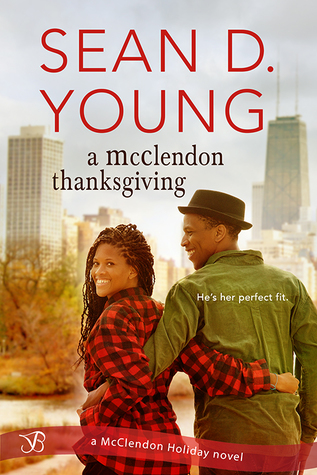 In A McClendon Thanksgiving (McClendon Holiday #1) by Sean D. Young, Faith McClendon is returning home after her marriage fell apart. Determined to focus solely on her career as a fashion designer, Faith never imagined she'd have a chance to repair her friendship with her best friend, Michael Montgomery. But when Michael tells Faith how he feels about her, will she give him a chance or will she break his heart all over again like she did when she got married?

This is the first book I've read by this author, and it's a book encompassing the friends to lovers trope; the tight bonds of family; winning back a friendship and having it become so much more; and a couple that face some tough obstacles in hopes of achieving their happy ever after, obstacles including the heroine's fear of losing herself again and whether the heroine's family will approve when it comes to what the hero wants because of his love for Faith. The way this story started had me liking the heroine immediately, as spending time with her sisters is something she needs, especially after all that she's been through that has made her return home to be with her family.

As for the dialogue, it was intense due to the main characters back stories, especially that of the heroine, because of what she's been through with her ex that makes her determined to rely only on herself. I also liked how determined she was to get her business up and running and how much success she has once she's opened, which is proven by the deal she's offered. Really, she's resilient and I liked that she took a chance on the hero. Then again, he's always been there for her through thick and thin. So, why did they lose their tight bond when she married? How could she not accept the hero's opinion when it came to her ex when she'd always listened to his opinion? While the hero, he's confident, hard-working when it comes to his career as a photographer, determined to win the heroine's heart and I liked the tight bond he has with his mother that has her offering advice when things don't go according to the plan Michael had for his future with Faith.

Overall, this author has penned a wonderful read in this book where the chemistry between this couple didn't have me feeling their connection at first, because it felt more like friends than the pair being interested in each other, but as the story progresses, the connection definitely grows. The way this story ended had me worried for this couple's happy ever after because of what the heroine is going through. Yet, in saying that, I liked how everything worked out for the best for Michael and Faith, because she certainly deserves a second chance at happy ever after with a man she knows will never let her down. However, it was the epilogue that wrapped things up nicely because of the special day for this couple. I would recommend A McClendon Thanksgiving by Sean. D Young, if you enjoy the friends to lovers trope, holiday romances, or books by authors LE Rico, Sonya Weiss, Robin Bielman and Candace Shaw.

Fashion designer Faith McClendon is back in Chicago to start over. She put her promising career on hold for too long, and she’s ready to get back in the game. She’s not willing to put her heart on the line again—it’s still far too bruised from her failed marriage for that, so when a renewed childhood friendship starts to make her think about second chances at love, she’s more than a little hesitant.

Photographer Michael Montgomery was Faith’s biggest cheerleader when she decided to move to New York City, and he’s been her shoulder to cry on since she came home to Chicago. He’s never been able to tell her how he feels, but maybe now is his chance to make the family portrait in his head—the one with Faith by his side—a reality. First, he’s going to have to break down the walls Faith has around her heart and convince her they can be so much more than friends.