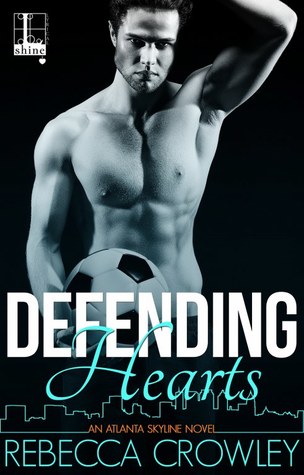 In Defending Hearts (Atlanta Skyline #2) by Rebecca Crowley, Atlanta Skyline soccer star, Oz Terim, or the Wizard as his fans like to call him has been receiving threats. So, hiring a security detail is the right thing to do, even though it goes against everything he believes in. However, hiring Kate Mitchell is in his best interests, even if she isn't part of his plan for his life. Will Kate be able to keep Oz safe, or will the person responsible for the threats get to him and keep the pair from achieving their happy ever after?

Having absolutely loved the first book of this series, I couldn't wait to read more about the heroes of the Atlanta Skyline soccer team and the heroines they fall in love with, and I've got to say that this story was everything I could have hoped for and more due to the enthralling main characters that I was enchanted by and compelling dialogue that kept me entertained from start to finish, as these two do their best to deny their chemistry because she works for him and knows things should remain professional between them. The way this story started had me hooked and really liking both the main characters and had me determined to discover how desperately Oz needs security to stay safe, considering the harshness of the threats. Will he agree to the heroine's suggestions? Will he co-operate when the time comes for Kate to implement the security measures she's determined to put into place?

As for the dialogue, it was well-written, attention-grabbing because of the main characters back stories, and I loved their growing relationship that shows how opposite these two are and how good it is that opposites attract. Moreover, the heroine has been through a lot and I loved learning all about her time in the military and the reason why she's returned home. Certainly, she's resilient, independent, courageous and I liked how determined she was to make the best of everything that happens in her life whether its her strained relationship with her family or her growing relationship with Oz, even though there are moments where I think they'll never get together due to the heroine's fears. While the hero, he's confident and determined to achieve the plan he has for his life. However, the heroine forces him to toss his plan because she means everything to him, which is palpable by their teasing banter and his determination to win the heroine over. I also liked the close friendship the hero had with one of the secondary characters and that the man could offer advice when Oz desperately needed it. Will Oz accept the advice and do everything he can to make the heroine realize he's the man for her?

Overall, Ms. Crowley has penned an incredible read in this book where the chemistry between this couple was powerful, the romance was passionate and showed off this couple's chemistry really well, and the ending had me concerned for the main characters because of what they go through. Will what they go through bring them close together again after things went awry? Will the heroine face her fears to give the hero a chance? However, it was the epilogue that wrapped this story up perfectly, because of the hero's determination to do everything he can to make the heroine comfortable in his life, even though her being in his life is totally disrupting to his plan for his life. I would recommend Defending Hearts by Rebecca Crowley, if you enjoy the opposites attract trope or books by authors Kelly Jamieson, Sharla Lovelace, Lia Riley and Kelly Moran.

When The Pitch Gets Personal

Atlanta Skyline’s star Swedish wingback Oz Terim—or as the fans call him, the Wizard—has an airtight plan for his life, his career, even his meticulously renovated house, but he barely gives a thought to the Islamic faith he inherited from his Turkish parents. So no one’s more surprised than he is when he’s the victim of anti-Muslim hate crime. Refusing to take the threat seriously, he resists the security detail Skyline insists on . . . until he meets Kate Mitchell. There’s no room for her in his plan and she’s the exact opposite of what he wants. Then why can’t he keep his hands off her?

After ten years in the military—and getting fired from her first post-Army job in Saudi Arabia—Kate Mitchell has slunk home to her Georgia roots. Private security isn’t the career she dreamed of, nor is she thrilled to work with an uptight professional athlete who plays a sport she has no interest in. She never expected to be attracted to him—or for him to fall for her, too. As their opposite lives tangle up—and the threat against Oz grows more serious—Kate has to decide who she wants to be in life and in love.