REVIEW: AGAINST ALL ODDS by JEZZ DE SILVA 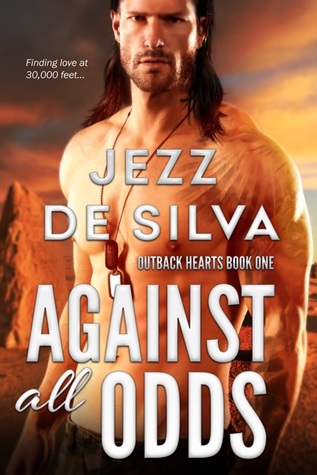 In Against all Odds (Outback Hearts #1) by Jezz De Silva, Abigail Williams is in for the fight of her life, so embarking on a trip to Australia is the perfect idea before she undergoes surgery. However, she never imagined she'd meet the love of her life on the flight from LA to Australia. Spending time with Sergeant Ryder Harper is a dream come true, but when the time comes for her to leave, will Ryder be able to stick to the promise he makes her or will he do everything he can to fight for their chance at forever after?

This is the first book I've read by this author, but I've got to say that it won't be my last, especially when it comes to this series since Ryder's family are an absolute delight and I'd love to read more about them, as his siblings each deserve their happy ever after too. Right from the beginning, this story was extremely riveting, as the heroine is a total survivor and doing everything she can to enjoy life to the fullest in case she doesn't survive what she's going through. However, the moment that the hero and heroine met was one of the best moments, as both have been through so much and after the sweet thing she witnesses Ryder do, it's hard for her not to be fascinated by him.

As for the dialogue, it took me on an emotional rollercoaster, as the hero and heroine have been through difficult times in their lives and it was hard not to be affected by everything that's happened to them. Truly, Abigail isn't the only one that's a total trooper; someone that's had to fight for their life. However, in saying that, the dialogue wasn't all intense and made me laugh or smile due to the heroine's sassiness and her desire to make her adventure the trip of a lifetime. Will Abigail experience everything on her bucket list?

Both the main characters were enthralling and their back stories certainly made them the engaging and fascinating characters they are. The heroine has been through so much, and yet, she continues to fight for her life with everything in her, even though she may die because of what she has. Really, she's resilient, courageous and I liked how determined she was to have fun and enjoy the adventure she was on. I also liked the bond she shared with her sister and how the pair would do anything for each other, especially since Abigail did so much for her sister growing up and now it seems her sister is determined to return the favor.

While the hero, he's had it tough due to his time in the military and what happened to him that had him leaving the elite military unit he was a part of. Yet, he's confident, strong,  brave and I liked how determined he was to win the heroine over, even though she has a condition that when it's time for her to leave that he needs to let her go without a fight. Yet, what I liked most of all about the hero is the bond he shares with his family and how their warmth and love for each other extends to Abigail, even before they get to know her fully.

Overall, this author has penned a well-written and highly entertaining read in this story where the chemistry between this couple was off-the-charts and had me reading quickly, determined to discover how things would work out for this couple. Will Abigail survive what's happening to her for the pair to have their happy ever after? However, in saying that, I was stunned by what happens to the heroine that tears this couple's relationship apart at the critical moment in the story, but I absolutely loved how things worked out for this couple, as no one is more deserving of happy ever after than Ryder and Abigail. Yet, it was the epilogue that wrapped this story up wonderfully, because of what the heroine's sister did for her to make sure Abigail lived her life for her. I would recommend Against all Odds by Jezz De Silva, if you enjoy books with ex-military heroes or sassy heroines; or if you enjoy books by authors Tif Marcelo, Mia Sosa, Olivia Dade and Amy Andrews.

The bomb ticking inside Abigail Williams has shadowed every moment of her adult life. With the timer counting down, Abi embarks on one final adventure into the Australian outback before returning to L.A. to fight for her life.

Sergeant Ryder Harper survived over a decade in Australia’s most elite military unit. He’s ready to hang up his assault rifle and drag what’s left of his broken body back home. He dreads the long flight back to Brisbane, until he collides with the stubborn, maddening seductress sitting beside him.

Abi ignites a need deep inside Ryder, leaving him desperate for more time with this woman with mesmerizing eyes and an even more intoxicating spirit. But when Abi finally relents to Ryder’s offer to be her outback guide, she has one condition: When it’s time, he’ll have to let her go.