REVIEW: HOLIDAY IN THE HAMPTONS by SARAH MORGAN 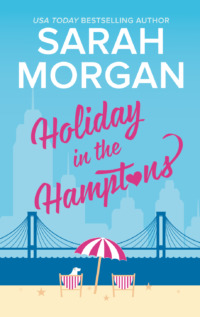 Holiday in the Hamptons
From Manhattan with Love #5
By Sarah Morgan
Releasing August 29th, 2017
Harlequin MIRA

In Holiday in the Hamptons (From Manhattan with Love #5) by Sarah Morgan, Felicity 'Fliss' Knight never thought she'd come face-to-face with her ex-husband again, but when he starts working at her local vet clinic, Felicity is determined to avoid crossing paths with him. So, when an opportunity presents itself for Felicity to get out of town, she takes it. Yet, when Fliss's plan comes unstuck and she finds herself face-to-face with Seth Carlyle for the first time in ten years, she doesn't know what to do, except stay away from him. However, Seth doesn't make things easy and Fliss finds herself falling for him all over again. Will they get their second chance at happy ever after or will their past demons keep Fliss from taking a chance?

Ms. Morgan is a new-to-me author and I've got to say that I really enjoyed this book because of the hero and his determination to win the heroine back; the intense dialogue that made me sympathize with the main characters because of what happened that tore them apart; the entertaining secondary characters that had me laughing with their teasing banter because they want Fliss to be happy; and the tough obstacles that had me wondering if this pair would be able to overcome them. The way this story started with the prologue had me hooked, as it reveals how difficult Fliss's life was with her father and how her relationship with Seth made it better. However, it was from the moment where the hero and heroine met for the first time in the present that made this story fast-paced for me, as I wanted to know whether Seth would be able to win the heroine over, especially since she's lying to him to protect herself. Will Seth discover the truth or does he already know?

As for the dialogue, it was intense due to the main characters back stories, especially that of the heroine, as her upbringing was so different to his. Where the hero had a loving family, Fliss did everything she could to keep herself safe from the one person that should have done everything to protect her. Moreover, the heroine is strong and brave, yet I found her a tad frustrating when it came to her denying her and Seth's second chance at happy ever after. Just because she had a horrible upbringing and that things didn't work out with the hero the first time around, it didn't mean that the second time couldn't be different. Didn't Fliss realize she could trust Seth? Yet, in saying that, I liked the moment where she began to give the hero a chance, because she did still have feelings for Seth. I also liked how Fliss did everything she could to prove her father wrong by building a successful business that she's determined to make even successful.

While Seth, he's done well for himself, yet I couldn't help but sympathize with him when it came to his sister meddling in his love life and trying to push him into something he didn't want. I also liked how kind and caring he is towards his patients and that he would do anything for the animals he treats. Yet, what I liked most of all about the hero was his determination to win the heroine back and that he didn't push her to open up to him about the past until she was absolutely ready. I also liked that the hero had the secondary characters on his side and that they all sang his praises to Fliss, because he's the most open and honest person that does right by those he loves and cares about.

Overall, Ms. Morgan has penned a really good read in this story where the chemistry between this couple was as strong now as it was in the past, where the romance showed how good these two are together, and the ending had me smiling because Fliss and her twin sister would do anything for each other, which is proven by what her her sister does for Fliss because she doesn't want the heroine to miss out on her second chance at love. Yet, what I liked most about the way this story ended is what Seth was willing to do to be with Fliss and vice versa. Will they stay in the Hamptons or go back to New York? Will Seth give up everything he's worked so hard for, or will Fliss make the sacrifice and do her best to expand her and her sister's dog walking business in a new location? I would recommend Holiday in the Hamptons by Sarah Morgan, if you enjoy second chance romances or books by authors Roxanne St. Claire, Jill Shalvis, Susan Mallery and Julie James.

Professional dog-walker Felicity Knight loves everything about New York...until her ex-husband starts working at her local vet clinic. She hasn't seen Seth Carlyle in ten years, but one glimpse of him--too gorgeous, and still too good for her--and Fliss's heart hurts like their whirlwind marriage ended yesterday. So when her grandmother in the Hamptons needs help for the summer, it seems the ideal way to escape her past.

Their relationship might have lasted only a few scorching months, but vet Seth knows Fliss--if she's run away to the Hamptons, it's because she still feels their connection and it terrifies her. He let her go once before, when he didn't know any better, but not this summer! With the help of his adorable dog, Lulu, and a sprinkling of beachside magic, Seth is determined to make Fliss see that he's never stopped loving her...