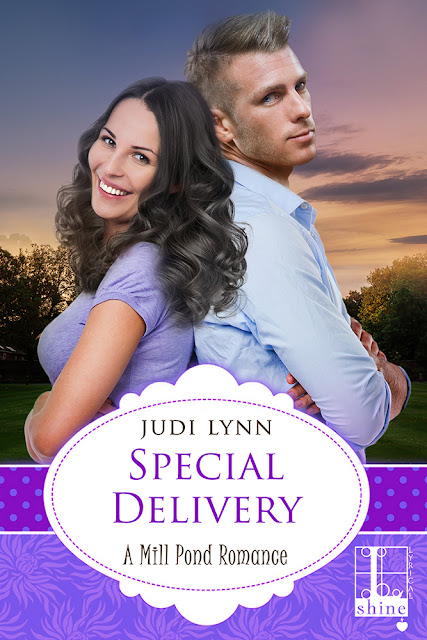 In Mill Pond, Indiana, neighbors always look out for each other. And even though tourists are drawn to the small town’s charms, it’s the locals who fill it with warmth . . .

Traveling nurse Karli Redding doesn’t have many fond memories of her aging grandfather, Axel—or of Mill Pond. But with Axel’s health in decline and Karli on a month’s hiatus between jobs, she volunteers to set him up with the help he needs. The house and her grandfather could both use some TLC. Good thing Keagan Monroe, the very attractive mailman next door, is always ready to lend a hand . . .

Not a lot slips by a mailman, and Keagan appreciates Karli’s dogged attempts to spruce up the neglected property. Painting, fixing the sagging porch, delivering a constant stream of casseroles from caring neighbors—he’ll help however he can, all while keeping his feelings under wraps. A short-term fling just doesn’t fit into his schedule. But with each passing day, Karli’s bond with the town grows a little deeper. Has fate sent her exactly where she needs to be? Karli’s willing to find out, and the first step is figuring out the perfect route to Keagan’s heart.

She was eating at the wooden table in the kitchen with the oven on, soaking in the heat, when a mouse ran over her foot.
“Holy crap!”  She wouldn’t let herself jump on a chair.  She was a grown woman, and she wouldn’t scream over a mouse.  But she wanted to.
“You okay?”  Words she never thought she’d hear Axel utter.
“A mouse just ran over my foot.”
He grunted.  “Yeah, they come in about this time of year when it gets cold outside.”
She walked to the door to talk to him.  “How do you catch them?”
“There are some traps in the broom closet.”
She wrinkled her nose.  “I’m not going around the house to collect little dead bodies.”
“Suit yourself.”
She frowned at him.  “There must be something else.”
“Mice leave when there’s a cat in a house, but when you leave, you take the darned thing with you.”
“I don’t want a cat.”
“Then kill the mice or start naming them.”
She glowered toward Kurt.  “Mice are a man’s job.  He should deal with them.”
Kurt finished a beer and swiped at his mouth with the back of his hand.  “They don’t bother me.”
“They’re disgusting.  They spread disease and multiply faster than rabbits.”
He shrugged.  “They don’t eat that much.  Put some cheese out for them.”
She turned and stalked back to the kitchen.  The idiots!  She wasn’t about to start every day by sweeping away mouse turds.  She went to her room and called her mom.  “Axel has mice.  I heard about a gadget you plug into the wall that has a high-pitched sound that drives them away.”
“You have to buy one for each floor,” Mom told her.  “I don’t think there are any outlets in the attic.”
Karli could picture every mouse running to the third floor of the house and partying there.  “So what do I do?”
“We always had barn cats when I was growing up.”
Karli sighed.

I taught elementary education for six years before I had my two daughters. I have a fondness for kids, so lots of them have been in and out of our house. I have a fondness for cooking, too, which means I fed a lot of them. As much as I love hamburgers and hot dogs, the kids had eclectic tastes, so I collected more and more recipes and cookbooks. Today, food sneaks into my stories, and if I'm lucky, so do children...and strays. I invite most of them in and now have a stray cat who walked through our doors to rule our house, a stray chihuahua who barks at everything, and an adopted parakeet and rat terrier. I also have a very patient husband, or he'd have probably left before now.