REVIEW: FOUR WEDDINGS AND A FLING by BARBARA DeLEO 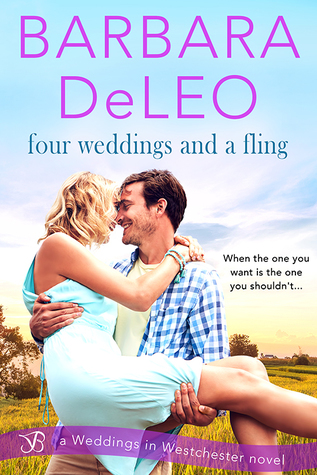 In Four Weddings and a Fling (Weddings in Westchester #3) by Barbara DeLeo, Grace Bennett doesn't have time for a relationship, especially not when she's starting her own business. However, when she finds herself working with Ari Katsalos at his parents' wedding hall, no matter how hard she tries, there's no denying she wants him. Will she be able to convince Ari that love is a risk worth taking, or will they lose their chance at happy ever after?

This series introduced me to Ms. DeLeo's fabulous writing, and I've got to say I have loved the Katsalos family from the very first book. Really, the siblings have done all they can to keep their parents' wedding hall afloat, and now it's Ari's turn to do his part because Grace needs his help. The way this story started had me loving the powerful chemistry between Grace and Ari; chemistry that Grace is determined to ignore because she wants more than Ari is willing to give since he's anti marriage and long-term relationships.

As for the dialogue, it was well-written, compelling and had me really enjoying the growing relationship between the hero and heroine, as it's hard for Grace to be around Ari as much as she is and keep her distance. Will Ari finally realize that forever after is a good thing? Furthermore, the heroine is hard-working, driven and I liked how determined she was to win the hero over, even if it meant trying to make him understand that compromising isn't a bad thing and change can be good. While the hero, he's had it tough and always felt like he doesn't fit in with his family because of his learning disability. However, he's grown into a strong, capable and hard-working man with his own PI firm. I could also understand why he doesn't do long-term relationships for fear of getting hurt and not wanting to fall in line with what a woman wants from him. Does Grace ask too much of him that he sees compromising as just her wanting to change him? I also liked how charming the hero could be and that he would do anything to get Grace to change her mind when they first come face-to-face in the story and he needs her help.

Overall, Ms. DeLeo has delivered a very captivating read in this story where the romance was on the sweet side; and the ending had me absolutely loving the hero more than I already did because of what he does to win Grace back and make sure his parents are happy. However, it was the epilogue that wrapped this story up wonderfully, as the Katsalos family are reunited for a very special event. But what I loved most of all about the epilogue is the words Grace and Ari say to each other at the end. Certainly, he knows how to make Grace feel special. I would recommend Four Weddings and a Fling by Barbara DeLeo, if you enjoy the friends to lovers trope, sweet romances, or books by authors Barbara White Daille, LE Rico, Paula Altenburg and Ashlee Mallory.

Grace Bennett is determined to set a perfect example for her new wedding planning business. From now on it will take more than good looks and a charming smile to win her over. The next guy to get her attention will be sweet, dependable, and looking for something serious. But first she’ll have to survive the next couple of weeks at The Aegean Palace with swoon-worthy Ari Katsalos.

Ari doesn’t believe in happily-ever-after. Between his estranged parents and the cheating spouses he tracks down as a P.I., he hasn’t seen many examples of a good marriages. Helping out at his parents’ wedding hall seems like a nightmare... except for the time spent beside the irresistible Grace.

Ari and Grace want very different things, but it’s getting tough to resist the powerful chemistry burning between them.