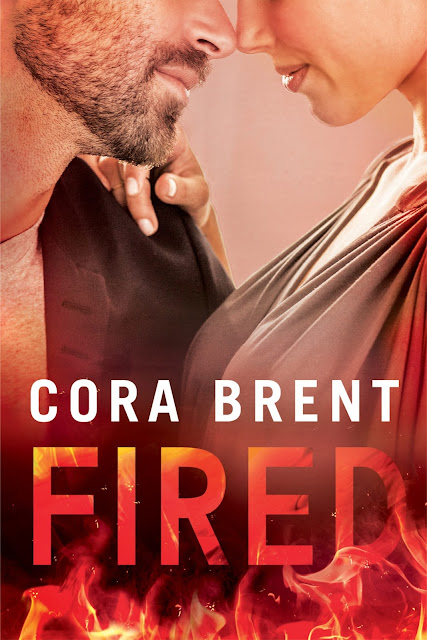 In Fired (Worked Up #1) by Cora Brent, losing her job at an upscale resort might have been the best thing to happen to Melanie Cruz, especially now that she's working for Dominic Esposito and his brother as a manager for their small chain of family-owned pizzerias. However, working alongside Dominic isn't as easy as Melanie thought it would be, especially with the strong chemistry between them. Will Dominic realize that Melanie is the right woman for him, or will he lose the woman that's coming to mean so much to him because he's afraid to take a chance?

What an extremely entertaining, fast-paced, captivating read Ms. Brent has delivered in this first book of her Worked Up series where the main characters were enchanting and their wonderful banter had me determined to discover how long it would take for Melanie to win Dominic over because it's palpable he doesn't want to want her. Will he realize that Melanie is his Ms. Right before he loses her? The way this started had me sympathizing with the heroine, as she made a huge error in judgment that leads to a terrible aftermath for her when it comes to her job. Will she be able to bounce back and prove she's responsible and can follow orders passed down from her bosses?

As for the dialogue, it was intense due to the main characters back stories; what the heroine goes through in the beginning that makes her feel like a failure because -- what if she can't find another job; and everything this couple go through on their journey to happy ever after including whether the restaurant will succeed. Will media coverage (reporters) prove to be the restaurant's downfall, especially when it comes to the hero's past? Moreover, the heroine was strong and brave the way she's managed to pick herself up and move on after what happened to her with her previous job, which could have caused plenty of trouble for her when it came to finding a new job. I also liked how the heroine handled the hero and that she didn't let him get away with how he treats her in the beginning, as if he's too busy to interact with her for long. Yet, what I liked most of all was how hard-working she was and that she did everything she could to help the hero interact with his employees better so they're not afraid of him.

While the hero, he's done everything to make up for his past mistakes in what he did to his cousin. Will he be able to make things right between them? I also liked the tight bond he shared with his brother and how hard they've worked to accomplish their dream of re-opening their family restaurant, which seems to be doing so well. I also liked how the hero took a chance on the heroine, despite their rocky start in the way he treats her since he knows that getting close to her could end in disaster not just for himself but for their family's restaurant.

Overall, Ms. Brent has delivered a fantastic read in this book where the chemistry between this couple was wonderful; the romance nicely-detailed and showed how good these two are together; and the ending had me loving the hero's determination to win the heroine's heart, as he needs her in his life to be fully happy. I would recommend Fired by Cora Brent, if you enjoy books by authors Terri Anne Browning, Kaylee Ryan, Samantha Towle and Scarlett Cole.

In this fiery series debut from New York Times and USA Today bestselling author Cora Brent, a workplace romance might prove too hot to handle.

Still reeling from a nasty divorce, Melanie Cruz’s pride takes another beating when she loses her enviable job at an upscale resort. After a flurry of unsuccessful interviews, she finally—desperately—accepts a job managing a small chain of family-owned pizzerias in a quaint downtown Phoenix neighborhood.

The job also comes with Dominic Esposito, her overbearing but ridiculously handsome boss. Falling for him might be the last thing she expects, but maybe it’s the one thing she needs.

As hard as they try to resist, Melanie and Dominic embark on a romance as hot as a brick oven, and Melanie has every reason to believe that maybe, this time, she’s finally found “the one.” But Dominic has a secret—one even his family doesn’t know. And the scandal could threaten everything he and Melanie have worked for…in business and in love.