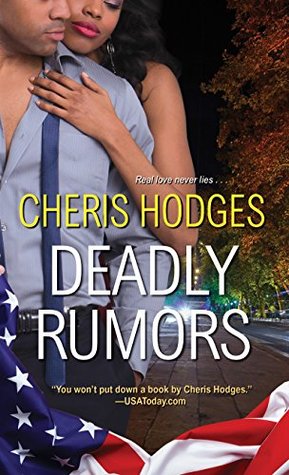 In Deadly Rumors (Rumor #3) by Cheris Hodges, Carver Banks is determined to keep Zoe Harrington safe, but the only way he sees that happening is by deceiving her. However, Zoe is determined to help with his case while getting her way by charging the FBI double her fee. Yet, when Zoe discovers the truth about why Carver really wanted her involvement for the case, she feels betrayed. Will Carver be able to prove to Zoe that he was only doing what he thought was right, or will he lose the woman he loves because of another error in judgment that could put her in the path of danger?

Having not read the first two books of this series, I was a bit worried that I wouldn't be able to get into the characters as much as I would have if I'd read the first two books, but I can say without a doubt that this book can be read as a stand-alone. The way this story started sets the fast-pace of the story and definitely drew me in quickly, as I wanted to know why Zoe was being targeted by a madman and whether Carver would be able to keep her safe. However, it was from the moment the hero and heroine came face-to-face for the first time in this story where things really started to get interesting, as there's plenty of tension between the two main characters that had me wondering what the hero did that makes the heroine so unfriendly towards him.

As for the dialogue, it was intense due to this couple's history that makes the heroine so hesitant to forgive and forget what the hero did to her in the past. However, the heroine is resilient, courageous and I liked how determined she was to prove to her family that she can take care of herself and that they don't have to be so overprotective. I also liked how tenacious she was when it came to her job as a PI and that she didn't give up until she had the answers. Yet, what I liked most of all about the heroine was her feistiness and that she stood up to the hero while fighting her attraction to him. While the hero, he's confident, cocky and I liked how determined he was to win the heroine over, even though it isn't easy because of what he did in the past. I also liked how determined he was to keep Zoe safe, even though he's deceiving her and knowing that when she finds out he's going to have to defend himself because Zoe will be completely livid.

Overall, Ms. Hodges has delivered a really good read in this book where the pages flew by because of the tension between this couple that creates great chemistry; and the ending had me on the edge-of-my-seat, as the heroine faces her enemies. Will she come out victorious against the people after her? Will Carver be able to protect her? However, what happened to one of the main characters took me totally by surprise and I liked how Zoe's brother helped her to deal with what happens. The way they tease each other had me smiling, because her brother can be pretty overprotective. Yet, it was the epilogue that wrapped this story up nicely, as Carver is determined to prove to Zoe that they can have the love and happiness that her brother and his wife have, if she's willing to compromise and hopefully give him the answer he wants to a very important question. I would recommend Deadly Rumors by Cheris Hodges, if you enjoy romantic suspense, the enemy to lovers trope, or books by authors Candace Shaw, Rochelle Alers, Brenda Jackson and Synithia Williams.

Elite investigator Zoe Harrington isn't about to be fooled twice. She knows all the tempting by-any-means-necessary games FBI agent Carver Banks will use to close a case. So when he needs her help with a missing person case, she's happy to charge him double the fee—and keep his sizzling moves at arm’s length. But when the search strikes too close to home, Zoe finds the passion between them reigniting past the danger point . . .

Carver doesn't want to deceive Zoe again. He's never stopped wanting the sexy private detective who can match him play for passionate play. But she's at the top of a hit list. And he'll do whatever it takes to keep her out of harm’s way—until Zoe uncovers his true agenda. Now, how can he prove his love for her is real? And with time running out, will their one chance to survive mean losing each other forever?