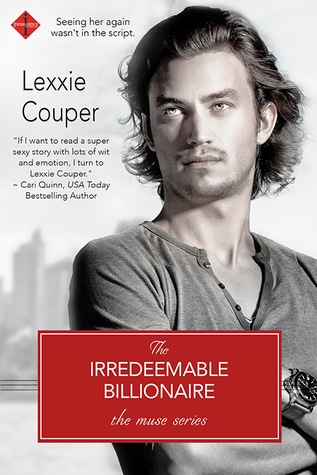 In The Irredeemable Billionaire (Muse #3) by Lexxie Couper, Sebastian Hart has never been one to follow the rules, but now his rebellious ways have come back to bite him when he finds himself having to perform community service. However, being assigned as part of the Big Brother program to Grace Wilder's little boy, is a huge problem. Because they used to be next door neighbors when they were younger and he wasn't exactly the nicest person to her. Will Sebastian be able to make things right with Grace while proving he has what it takes to be a great Big Brother to her son, or will he lose his chance at happy ever after with the one person he's always had feelings for?

If you've never read a book by Ms. Couper, you're certainly missing out on some outstanding reading, and this book was a very entertaining, fast-paced, remarkable read where I was hooked immediately by the hero and heroine and the reason he's come back into her life. Certainly, they're enemies because Sebastian was a nuisance with the way he teased and tormented her growing up, yet he's determined to make things right between them and show her that he's changed. Will he win the heroine over?

The way this story started had me sympathizing with the heroine, as being a single mother as well as working as much as she does can't be easy. Yet, she has a great best friend that will do anything to help her, even if it means bringing the hero into her life deceptively. However, it was from the moment the hero and heroine met that had me intrigued to know why the heroine sees Sebastian as the enemy. What did the hero do in the past that makes her so hesitant to give him another chance?

Both the main characters are absolutely enthralling and I loved every moment they conversed, as Sebastian is confident and a man that always does what he wants, which is proven by how he ended up being a big brother in the first place. I also liked how determined he is to win Grace over since it's palpable he's always had feelings for her, even though he teased her relentlessly and never acted as if he were interested in her when they were younger. Yet, what I liked most of all about the hero is the growing bond he formed with the heroine's son. While with Grace, she's strong and brave with all that she's been through with losing the man she loved and I liked that she stood up to her mother-in-law because the woman was a witch. I also liked how good of a mother she was and how she would do anything for her son, even if it means letting Sebastian be his big brother because the little boy needs a father figure in his life.

Overall, Ms. Couper has delivered another wonderful read for her Muse series where the chemistry between this couple was heady and convincing; the romance nicely-detailed; and the ending had me loving what Sebastian did to win Grace's heart. The saying go-big-or-go-home certainly applies, and there's nothing bigger than using the media to his advantage. I would recommend The Irredeemable Billionaire by Lexxie Couper, if you enjoy the enemy to lovers trope or books by authors Stefanie London, Diane Alberts, Regina Kyle and Kira Archer.

The rules have never applied to film director Sebastian Hart. He’s always done what he wants, when he wants. But after one too many wild nights, Sebastian finds himself performing community service in the unlikely role of big brother to a ten-year-old boy in need of a father figure. It seems like fate is playing with him when the boy’s mother turns out to be the girl he grew up next door to, the one person he’s never been able to win over with his smile or charm.

After the death of her husband, Grace Wilder has her hands full working as a paramedic and being both mother and father to their son. The last thing she needs is for the bane of her teenage existence to show up, or for her son to contract a case of hero worship. Even worse is the fact that the boy who once made her life miserable has turned into a man who has the power to destroy her with his devastating smile and sexy eyes.