REVIEW: WRAPPED UP IN YOU by CYN D. BLACKBURN 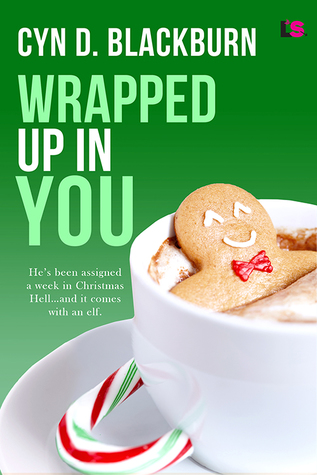 Wrapped Up in You
By Cyn D. Blackburn
Releasing November 13th, 2017
Entangled Publishing

In Wrapped in You by Cyn D. Blackburn, Police Officer Justin Weaver would definitely win the award for Grinch of the precinct, so in order to get him into the holiday spirit, he's been handed the role of Officer Kringle. Dressed up as Santa, he's to go around collecting toys. However, at least there's an upside to the role and that's Lilly Maddox dressed as an elf. The only thing is, she's annoying, his little sister's best friend and is following him around in hopes of writing the story of her career and land her dream job. Can Justin forgive everything Lilly did to him in the past, so they can have a shot at happy ever after; or will history repeat itself and cost them both what they want most -- a future together?

What a delightful Christmas read Ms. Blackburn has delivered in this story, which encompassed plenty of holiday cheer; wonderful main characters, even though it took until chapter 10 for me to warm up to the heroine; and captivating dialogue that had me really enjoying this couple's growing relationship, as Lilly strives to prove to Justin that she's changed. The way this story started had me smiling because of the great friendship Justin shares with his police partner Certainly, their banter shows both can give as good as they get when it comes to teasing each other. However, it was from the moment the hero and heroine come face-to-face for the first time that drew me into this story completely, as there's some seriously strong tension between Justin and Lilly that made me want to know what happened between them that has the hero so annoyed with the heroine's presence.

As for the dialogue, it was entertaining because of Lilly's enthusiasm for her career and Christmas and her determination to help Justin be the best Santa he can be, which the hero does not make easy. Because with everything that went on in the past and how the heroine betrayed his trust, it isn't easy for him to give her a second chance. Not when she still seems a little impulsive and determined to get what she wants without thinking about the consequences. However, in saying that, the heroine did impress me with the choices she makes towards the end that prove just how much she loves Justin. No way did she want to hurt him again. Will everything work out for the best when the hero discovers what Lilly is keeping from him, especially when it's something that could make or break her career?

While the hero, I absolutely loved Justin right from the beginning. He's a good cop, but is definitely not suited to be Santa with his attitude towards Christmas. Yet, in saying that, I loved how he grows throughout this story. He's compassionate, which is proven by what he does for two little boys, even though things go a little awry. I also liked how he handles Lilly and that they finally get a chance to hash things out about the past, so they can work together and hopefully get their chance at happy ever after.

Overall, this story was a really good read where the chemistry between this couple was strong and just kept getting more and more interesting; the romance was nicely-detailed and had me hoping that the heroine would earn Justin's forgiveness sooner rather than later; and the ending had me worried for this couple's happy ever after, as it's palpable what happens to make their relationship go awry feels a little like Déjà-vu with how everything unfolds and makes Justin feel like a fool all over again. However, in saying that, I liked that Justin realized how much he loves Lilly and how he shouldn't let anything stand in the way of the pair being together. I would recommend Wrapped Up in You by Cyn D. Blackburn, if you enjoy holiday themed stories, the sister's best friend trope, or books by authors Sean D. Young, Barbara DeLeo, Barbara White Daille and Ann B. Harrison.

For Officer Justin Weaver, Christmas is the most hideous time of the year. To improve his “holiday cheer,” he’s been put on Officer Kringle duty, collecting toys for the Ho-Ho-Patrol.

It’s a week in holiday hell.

Worse, it comes with an elf—his little sister’s gorgeous best friend—but Lilly Maddox isn’t so little anymore. And as an annoyingly festive reporter looking to make her mark, she’s there to document his every move.

Justin’s always had a thing for Lilly, but he refuses to go there with her. Ever. Not after watching what his mom went through as a cop’s wife. But now that they’re trapped in his squad car, avoiding her just got a lot more complicated…