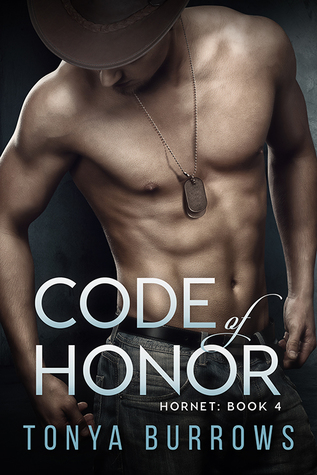 In Code of Honor (Hornet #4) by Tonya Burrows, Jesse Warrick and Lanie Delcambre have done everything they can to deny the chemistry that bounces between them, and now, with Jesse being promoted to field commander of HORNET, a relationship between them can't happen. However, when the HORNET team finds themselves in the right place at the wrong time when a group of terrorists take over the island they're staying at, Jesse decides to take a chance. Will they survive the terrorists plot, so they get their happy ever after; or will they're working together prove too much of a distraction and cause them to go their separate ways?

What do you get when Ms. Burrows pens a story encompassing a bunch of terrorists determined to cause lots of destruction, a team of good guys determined to keep everyone safe, and a fast-paced storyline with plenty of action? Well, for me this is a story that was captivating, thrilling and one that took me on an edge-of-my-seat adventure once the terrorists enter the story. The way this story started had me totally hooked by what was happening, as one of the secondary characters knows she's in trouble and it's palpable there's no way she's going to be able to get herself out of it. What will happen to her? Will someone come to her rescue? Will she be able to escape on her own?

As for the dialogue, it was intense due to the main characters back stories, everything this couple go through on their journey to happy ever after; and it's a story I loved every moment of, most especially once the action started and Jesse's team are in action and strategizing what they're going to do to get the upper hand against the terrorists. Will their plans come to fruition or will they have to work on the fly to combat any problems they face? Moreover, both the main characters made this story fascinating with their back stories and how the heroine challenges Jesse because of their chemistry and the fact that Lanie doesn't need a man to protect her, as she's strong, courageous and has plenty of handy skills to take on bad guys.

While the hero, he's been through a lot in his life. He hasn't been the best father and I liked that he's doing his best to make up for the past. His relationship with his son is complicated, but there's no doubt that Jesse is determined to be there for his son and help his kid combat his troubles. Why is his son acting out? I also liked how protective Jesse is of the heroine, even though she doesn't need to be protected. Not with her ability to think and act quick, which is proven by what she does to help the team win the battle they face against the terrorists. I also liked how tight of a bond the hero shares with his teammates and that he would do anything to keep them safe, which is proven over and over again. Yet, what I liked most of all about the hero is that he gave the heroine a chance, even if he's not great at relationships. Then again, it's palpable he's always had feelings for Lanie for almost as long as he's known her.

Overall, Ms. Burrows has delivered a story that kept me entertained from start to finish with its action; wonderful main characters and dialogue; and an ending that has me looking forward to what comes next for HORNET. Will the team be able to help one of the secondary characters that is now on the run? I would recommend Code of Honor by Tonya Burrows, if you enjoy romantic suspense, the friends to lovers trope, or books by authors Lynn Raye Harris, Kaylea Cross, Laura Griffin and April Hunt.

Jesse Warrick used to consider himself a kickass medic, but a teammate’s brush with death has him questioning everything. Now he’s been promoted to field commander of HORNET. How can he lead when he can’t get his shit together? And how can he focus when the sexy new recruit makes him want to break the rules?

Lanie Delcambre can’t seem to find solid footing within the elite hostage rescue team. Worse, the man she’s loved for most of her life is now her boss. She’d kill to act on the chemistry between her and Jesse, but she can’t risk ruining her career.

It was only supposed to be a training mission. No live ammo, no hostages, and no real bad guys—only someone didn’t give the bad guys that memo. When their hotel is taken hostage with half of HORNET inside, Jesse and Lanie are the team’s only hope of escaping alive…