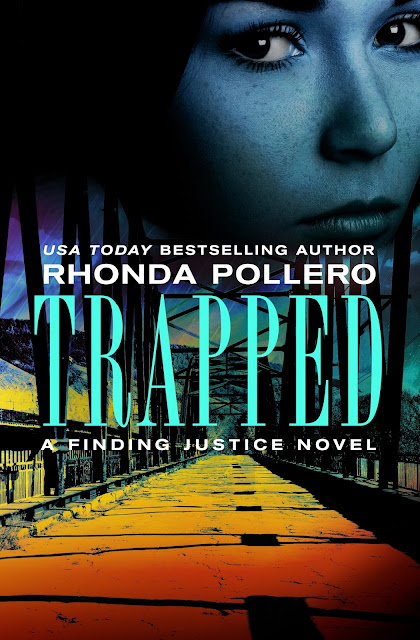 In Trapped (Finding Justice #3) by Rhonda Pollero, testifying in court doesn't turn out the way Chasyn Summers expected, and now, she's in desperate need of protection after an unfortunate event that has left her in danger. So, when she discovers that she has a bodyguard, Chasyn realizes she has no choice but to trust him to keep her safe. However, there's more than just her life in danger, and if she's not careful, she might just find herself falling head over heels for Declan. Will Declan be able to keep her safe, so they can have a shot at happy ever after; or will Chasyn run from the best thing that's ever come into her life -- the love of a good man?

What an interesting and entertaining ride Ms. Pollero takes readers on in this third book of her Finding Justice series, which had me on the edge-of-my seat at times and left me sympathizing with the heroine when she discovered the truth about why she was a target. The way this story started with the prologue was explosive and sets the fast pace of this story due to what happens with the heroine and her best friend that leaves her needing protection. Will Declan be able to keep her safe? However, it was from the moment Chasyn and Declan meet that had me sympathizing with the heroine, as she doesn't know who he is. How does she know he's not the one looking to kill her?

As for the dialogue, it was intense due to the investigation into what her best friend witnessed and why someone is looking to kill Chasyn. Will the truth leave her devastated? Furthermore, the heroine is resilient, brave and I liked how determined she was to make certain she knew everything the hero and his team discovered when it came to finally getting justice for those that were killed. I also liked how determined the heroine was to keep her distance from the hero, knowing that distractions can prove costly. However, in saying that, giving in to their chemistry is inevitable. While the hero, he's driven, smart, and I liked how determined he was to keep the heroine safe. I also liked the lengths the hero was willing to go to get answers for the heroine, even though things get very dangerous for the pair. Yet, what I liked most of all about the hero is how much of a challenge he faced from the heroine.

Overall, Ms. Pollero has penned an intriguing and fascinating read in this book where the chemistry between this couple was intense and the ending had me had me surprised by how far someone was willing to go to get to the heroine and had me feeling sorry for the heroine due to what she learnt about who wanted her dead. I would recommend Trapped by Rhonda Pollero, if you enjoy romantic suspense or books by authors Laura Griffin, Allison Brennan, Cate Beauman and Toni Anderson.

Lured into danger, trapped by desire . . .

Chasyn Summers has a target on her back. As the key witness in a murder case, she's risking her life to testify in court--and she needs protection. But when she's assigned a personal bodyguard who's disarmingly tough--and distractingly gorgeous--it's not just her life that's in danger. It's her heart . . .

Declan Kavanaugh works strictly by the rules. Never get too close to a client. And never, ever, fall in love. But he's never protected anyone as beautiful, or as intriguing, as Chasyn. Surrendering to passion is a risk they can't afford to take, especially when danger meets desire and Declan realizes Chasyn Summers may be the ultimate trap.

“You know you can take Burrows up on his offer,” Declan said after they pulled out of the parking lot.  “I won’t take it personally.”


“Get locked away in some house in God knows where with the occasional police cruiser driving by?  Besides, when I’m with you I can be active in the investigation.”  And have great, if temporary, sex.
“Good to now you have so much faith in me,” he said as his hand slipped over onto her knee.  Using his fingertips, he bunched up the fabric until he was touching her bare skin.  He began making maddeningly sensual circles with his thumb, inching it up higher and higher.  Chasyn’s breath caught in her throat when reached her thong.  Her body was fully alert and she tensed with need.
“Don’t” she said on a rush of breath.
“You’re wet.”
She reached down and pushed his hand away from her.  “And you’re driving.”
“I keep telling you I can multitask.”
“Well, maybe I don’t feel like being a distraction,” she told him as she straightened her clothes.
“You really do have a problem with spontaneity, don’t you?”
“I have a problem with how fast all of . . . this is happening.”
“We’re two consulting adults who happen to have some great chemistry.”
“That doesn’t mean we have to act on it,” she countered even though her nerve endings still sizzled from his touch.
Declan placed his hand back on the wheel.  “Sorry if you felt pressured.”
“I didn’t feel pressured,” she assured him.  “I just haven’t had enough time to process this yet.”
He chuckled.  “What’s there to process?
“I need to make a pro-con list to put this all into perspective.”
“Tell you what,” he began easily.  “You make your list and I’ll restrain myself until you’ve beaten this dead horse.”
“That was condescending.”
“It wasn’t meant to be,” he said.  “I’m just saying I’m willing to give you time.”
“How much?”
“However much you need.” 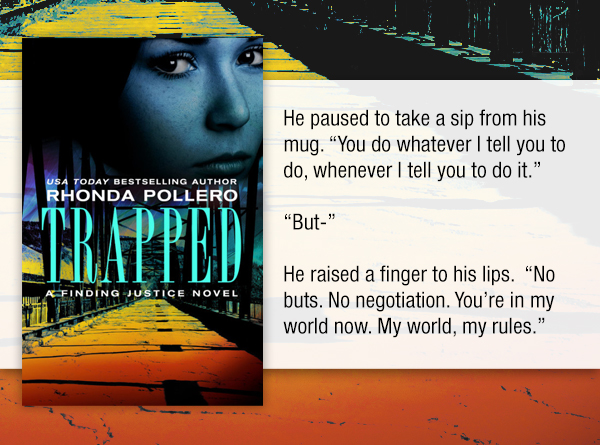 After selling her first romantic suspense in 1993, Rhonda Pollero has penned more than 30 novels, won numerous awards and nominations, and landed on multiple bestseller lists, including USA Today, Bookscan, and Ingram’s Top 50 List.  She lives in south Florida with her family.