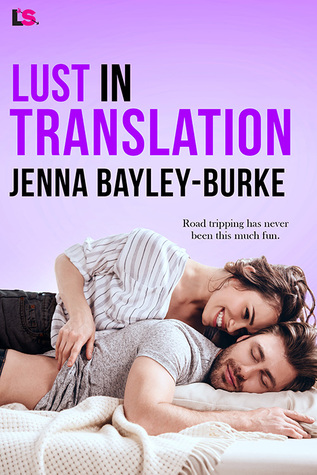 In Lust in Translation by Jenna Bayley-Burke, Xavier Moreau is determined to have the vacation he wants and no-one is going to change his plans, especially not Jaime Cruz, even though all she wants to do is get back to her hometown quickly. Besides, driving across America gives him the chance to visit all the places his mother loved. Determined to show Jaime how to have fun, instead of sticking to her strict itinerary, Xavier never imagined he'd fall for a control freak that could make him rethink his future. Will the pair get their happy ever after, or will the fact that they live on different continents keep them apart?

What a fun and exciting adventure Ms. Burke has penned in this story where I adored Xavier from the start and couldn't get enough of him. Really, his wanting to drive across America is for a good reason and I liked that he didn't allow anyone to talk him out of it, no matter how hard they tried. The way this story started had me completely hooked, because the hero isn't looking forward to spending time with anyone that doesn't want in on the adventure he plans on taking to get to his friend's wedding. Will Jaime go along with Xavier's plans or will she drive him crazy?

As for the dialogue, it was entertaining due to the main characters back stories, what's happening between Xavier's sister and father that has them at odds; and I loved the way Jaime and Xavier interacted with the hero being totally charming and determined to make sure Jaime enjoys herself instead of believing she needs to follow the plan she had set for their journey. Moreover, I really liked the hero with his determination to see America like his mom always wanted to. I also liked that he opened up to the heroine and wasn't afraid to go after what he wanted, which was to have fun with Jaime and convince her that she doesn't always need to plan things. While Jaime, she's been through a lot lately, and I could understand why she was so determined to convince Xavier to get to their destination quicker than he was planning. Would she be able to sort out of her life when it came to a job and somewhere to live? Things she needs to prove to her family that she can get her life back on track again. Yet, what I liked most of all about the heroine was her reaction to the way Xavier pushes her buttons and gets her to let her hair down and have fun. At least, he made her life interesting, instead of her being so driven and determined to plan everything.

Overall, Ms. Burke has delivered a wonderful read in this book where there's plenty of chemistry between the main characters that spills over onto the pages to give readers a good dose of romance; and the ending had me liking the decision the heroine made in order to be with Xavier. Finally, she's taking charge of her life and going after what she wants most, instead of just settling for what she planned to do when it came to her future. I would recommend Lust in Translation by Jenna Bayley-Burke, if you enjoy the opposites attract trope or books by authors Hayson Manning, Cindi Madsen, Stefanie London and Kadie Scott.

Jaime Cruz has a to-do list a mile long. She needs to get back to her hometown, find a new teaching position and a place to live, and ensure all the preparations for her sister’s big wedding go off perfectly. Good thing she’s organized and has a strict itinerary. But when her ride across country insists she have fun along the way, her plans and schedule go out the window…literarily and figuratively.

Workaholic Xavier Moreau is taking an uncharacteristic vacation to drive across America to see all the places his mother loved. He didn’t expect to have the world’s biggest backseat driver riding shotgun, but he can’t really refuse to take his best friend’s future sister-in-law with him when the wedding they’re both in is a shared destination. Pushing Jaime’s buttons is more fun than Xavier’s had in a long time, but getting the luscious control freak to let go soon has him questioning his own future.