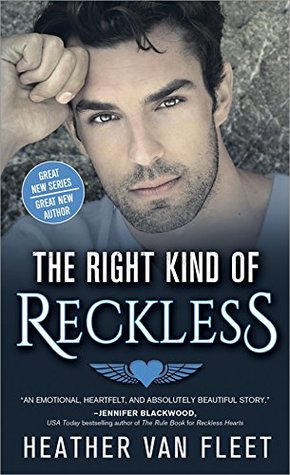 In The Right Kind of Reckless (Reckless Hearts #2) by Heather Van Fleet, there is plenty of chemistry between Max and Lia, but with Lia being his best friend's sister, Max has never acted on his feelings for her. However, Max has finally decided to take a chance, even knowing the risk that being with Lia might cost him his friendship with his best friend. Will he be able to convince Lia to give them a shot at happy ever after, or will he lose the one person that has come to mean everything to him?

Although I haven't read the first book of this series, this story can easily be read as a standalone. Really, right from the beginning, Max and Lia together with the secondary characters are introduced exceptionally well and didn't make me feel like I was missing a lot by not having read the first book. The way this story started had me proud of the heroine, as she shows her boyfriend that no-one should mess with her. What a way to show she's a strong, independent woman that has overcome a lot, even though she still needs rescuing every now and again. Luckily, Max is a good friend willing to do anything for her. However, it was from the moment the hero and heroine come face-to-face for the first time that had me totally hooked to this story, as Max and Lia have some seriously powerful chemistry that just keeps getting stronger. How can they continue to deny how they feel about each other?

As for the dialogue, it was intense and emotional due to the main characters back stories, especially that of the heroine because of a trauma she suffered in her past that has turned her into the woman she is today with colored hair and tattoos. Moreover, both the main characters were nicely-developed and I liked every moment these two were in each other's company. So much so, that it was palpable that nothing should keep them apart, especially not the fact that her brother is his best friend.

With the main characters, I really liked the heroine for her independence and her determination not to rely on anyone to get her out of a horrible situation like the one she was once in years ago. I also liked that she gave the hero a chance because he's good for her and vice versa. Yet, what I liked most of all about the heroine is the way she's overcome her past and done so well for herself in going after what she wants for her future when it comes to a career. While the hero, he's confident; protective of the heroine because of the moment when he first met her; and I liked that he would do anything to make her happy, which includes finally making something of himself when it comes to a career.

Overall, Ms. Van Fleet has delivered a fantastic read in this book where the chemistry between this couple was off-the-charts; the romance nicely-detailed and shows just how good it can be to put your trust in the right person, especially someone who cares about her as much as Max does; and the ending had me loving the decision the heroine made because these two were meant for each other. How could she possibly live without being around Max all the time? I would recommend The Right Kind of Reckless by Heather Van Fleet, if you enjoy the brothers best friend trope or books by authors Rebecca Shea, Kaylee Ryan, Stacey Lynn and Winter Renshaw.

"You'll fall in love with these rugged Marines and their Reckless Hearts!" —Kelly Gendron, USA Today bestselling author of the Breaking the Declan Brothers series

I'm in love with a woman I can't have, and there's absolutely nothing I can do to stop myself from falling.

The problem? Her brother's my best friend.

I shouldn't want her this much. Not when it goes against the bro code. Not when I've never been able to commit to a woman for longer than a night.

But one look into her eyes and I'm a mess for her. She's my everything. And I have to walk away with nothing.

"An emotional, heartfelt, and absolutely beautiful story. I wanted each character to be my best friend. Reckless Hearts was so real, with gorgeous writing that kept me hooked from first page to the last." —Jennifer Blackwood, USA Today bestselling author of The Rule Book

"Van Fleet has mastered the alpha hero. With perfectly flawed characters and miles of scorching heat, Reckless Hearts is a must read!" —Kelly Siskind, author of A Fine Mess

Addie and I watched the guys play round after round of Skee-B all, while Chloe jumped and cheered and stole the occasional ball from each of their rows. No matter what my state in life was, I was happy the three of them had found one another.

“Here, let’s get our picture drawn.” Knocking me out of my woolgathering, Addie guided me toward one of the caricature sketchers who sat just outside the carnival gates. The man had a unibrow the size of Lake Michigan’s shoreline, and his mustache was curled at the end, handlebar style. But his work was amazing. Charcoal sketches with colored eyes, balloon- shaped heads with movie-s tar hair.

“How much for both of us?” Addie asked, fishing through her purse. We sat on the stools, as directed, our shoulders touching.

“Thirty- five,” the guy said, his fake French accent too thick to be believable.

I groaned and looked at my friend. “Seriously? That’s too much.”

“Seriously. We have to do this.” Addie mocked me. “Look at how cute those are.” She pointed to a couple with a heart surrounding their heads. Little doves swooped in the air around them, carrying heart balloons in their beaks. Had to hand it to the guy. He was talented.

“I’ve got this, ladies.” I looked up at the sound of Max’s deep voice, finding him searching through his wallet. He pulled out the money, handed it to the artist, then lifted his gaze to meet mine. A soft smile covered his bow-shaped lips, and everything inside me stirred to life at the view.

Addie faked a cough, then pressed a hand over her stomach. “Oh…oh no. I don’t feel very good, guys.”

I faced her and narrowed my eyes as she stood. Don’t, I mouthed, already knowing her game.

Ignoring me, she looked at Max and said, “You’ll take my place, won’t you, Max?” She batted those brown eyes and twirled a lock of her dark hair. No doubt her way of getting anyone and everyone to say yes to her. “Lia here was dying to get her picture drawn.”

Max nodded, immediately taking her empty seat to my right. With an extra hop in her step, Addie walked away, her ponytail swinging back and forth more the closer she got to Collin and Gavin and Chloe. I wanted to pull it out of her head.

“All right, look this way.” I blinked at the sound of the artist’s voice, my body far too aware of Max’s heady scent.

God, why did he have to smell so good? Fit so perfectly against me?

“You’re much too stiff.” The artist tsked from behind his easel. “Here, wrap your arm around zee pretty lady’s waist, like so.”

I sucked in a breath as Max’s hand was guided along my back, ending at my side with his fingers tucked just under the edge of my T- shirt. I swallowed, shifting in my seat and instantly remembering our kiss— the way he’d moved his mouth over mine.

Warmth pooled low in my stomach, drifting in between my thighs. His touch was like adrenaline, kick- starting my orgasm-starved body to life.

“Chin on her shoulder, lips close to her ear…” I shuddered as Max followed the artist’s directions to a T, the stubble on his chin igniting a stormy thunder inside me. Max seemed unaffected, his chest rising and falling at an even rate, while mine was suddenly in asthmatic mode.

“Relax,” Max whispered in my ear, his warm breath grazing my neck. “I’m not gonna bite ya.”

I shut my eyes and shifted once again, the ache between my thighs becoming unbearable. “I didn’t want to do this,” I finally murmured, refocusing on the artist.

Max laughed softly, his chest vibrating against my back and shoulder. “I know you didn’t.”

My eyebrows pushed together in annoyance. “Then why did you agree to sit here?”

“Because Addie wouldn’t give up until I did.” He sighed, far too relaxed compared to me.

I was jumping, itching, crawling with…something, yet he was unaffected. Which only further emphasized that he didn’t want me the way I did him.

“Plus, she folds my underwear, remember? Gotta make sure she doesn’t stick ants in them or something.”

“Yeah, like Addie would ever stoop to your level.” I couldn’t help but grin, my nerves easing slightly.

He squeezed my ribs. “You would.”

I turned to face him, our noses inches apart. “Damn right I would.”

A slow nod later, he moved even closer, our bodies in sync…

My smile fell away. “Maxwell,” I whispered, so lost in his dark eyes that I couldn’t concentrate. The apology was there on my tongue like earlier, but the need weighing me down was even heavier. How could I ever be just friends with a guy who was likely to break my heart, no matter what we were to each other?

“Tell me why you kissed me that night.” He looked at my lips, a serious glint in his eyes.

Blood rushed to my face at his out-o f- the- blue question. My composure slipped as confusion took its place. Why was he asking me this?

“Because I…” I gulped. “I owed you, remember? For bailing me out and for keeping me safe from those guys.”

Something shifted in his eyes. Disappointment? I squeezed my eyes shut at the thought. When I looked back at him, I knew I was imagining things, because flirty, fun Max was back, winking at me. “Well then.” He cleared his throat. “That’s good to know.”

“That you still owe me.” 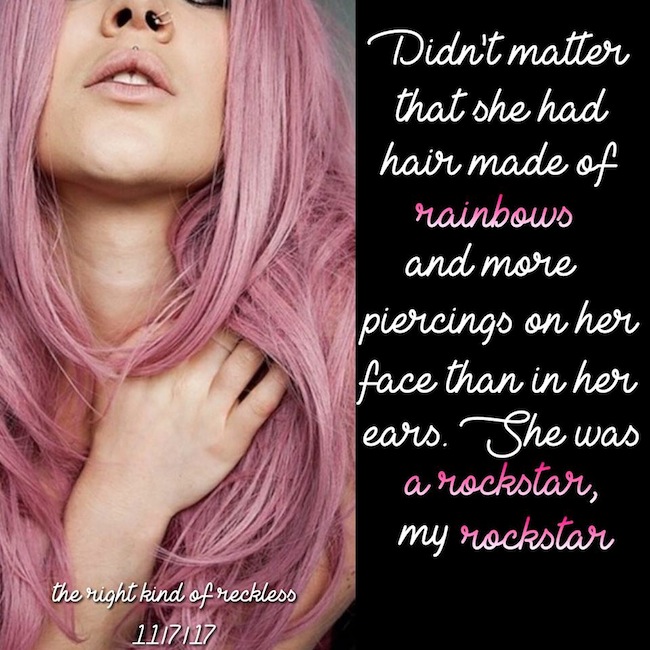 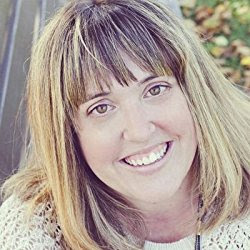 Heather Van Fleet is stay-at-home-mom turned book boyfriend connoisseur. She’s a wife to her high school sweetheart, a mom to three little girls, and in her spare time you can find her with her head buried in her Kindle, guzzling down copious amounts of coffee.

Heather graduated from Black Hawk College in 2003 with an associate degree and has been working in the publishing industry for over five years. She’s represented by Stacey Donaghy of Donaghy Literary.