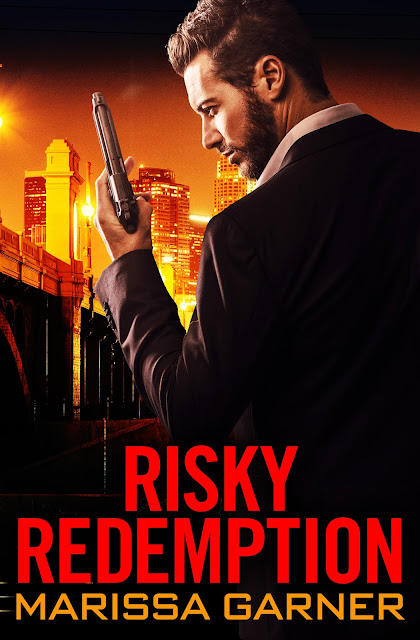 In Risky Redemption (Rogue Security #1) by Marissa Garner, Angela Reardon hasn't been able to get over the brutal attack she suffered four years ago, which makes it hard for her to trust a man. Yet, there's something about Jake Stone that has her willing to give him the chance to help her overcome her traumatic memories. But when the truth comes to light on why Jake has come into her life, will Angela give him the chance to help identify her assailant and find out who wants her dead; or will she walk away from the first man that has reignited her desire for love, family and happiness?

What a thrilling and entertaining journey Ms. Garner takes readers on in this first book of her Rogue Security series where I wasn't all that sure whether I could handle  how the story went back and forth between the past and the present, but in the end I believed it worked, especially once I discovered how the hero helped the heroine and when he finally uncovered the truth about her assailant and why someone wanted Angela dead. The way this story started had me immediately intrigued, as the hero has an interesting way of getting close to the heroine in order for him to be able to do his job. Will he be able to go through with what he's been assigned to do? Will getting to know the heroine and finding the truth about her past and the contract out on her finally earn him redemption for all that he's done in his past?

As for the dialogue, it was intense due to the main characters back stories; what the hero uncovers that leaves him feeling sorry for the heroine, knowing that the news will leave her devastated; and how horrible the heroine's family are because the heroine doesn't enjoy their rich lifestyle and prefers to live the life she's been living. However, in saying that, I liked how everything the heroine goes through gives her father the chance to finally make things right with Angela. Moreover, I felt sorry for Angela as she's been through so much and I could understand why she found it hard to put her trust in the hero, especially when he's determined to push her into finally doing things that might help her overcome her past and help her to heal. I also liked how strong and brave the heroine was and that she was willing to give the hero a chance, even though it takes her a while to finally be able to give him everything he wants and prove that she's finally ready to move on.

While the hero, he's been through so much in his past. He seems cold, calculating and a man that would do anything to get the job done. However, I liked that he proved differently as he realizes the heroine is innocent of the crime she's been accused of. Will he be able to make things right for the heroine before it's too late? Will he find out who hurt her in the past and why they're so determined to make sure she never discovers the truth? I also liked how determined the hero was to help the heroine and how protective he was of her when it comes to her family and keeping her safe. However, in saying that, I thought the hero was a little pushy when it came to helping the heroine overcome her fear of physical intimacy.

Overall, Ms. Garner has penned a really good read in this book where the chemistry between this couple was strong; the romance special because it shows Angela is finally ready to trust a man again, which helps her to heal; and the ending had me feeling sorry for the heroine because of what she learns about who was behind her brutal attack that left her traumatised until now. However, I really liked how things worked out for the hero and heroine, as Jake helping her helps him find redemption. I would recommend Risky Redemption by Marissa Garner, if you enjoy romantic suspense or books by authors Rhonda Pollero, Laura Griffin, Toni Anderson and Kat Martin.

Four years ago, Angela Reardon was brutally attacked, and she still bears the physical scars and traumatic memories. While she's worked hard to overcome her fears and build a successful business, she's still haunted by her inability to identify her assailant. Now Angela only wants to be left alone-until a shadowy stranger reignites her desire to be loved. But their time together may be brief...because someone wants her dead.

CIA assassin Jake Stone's targets deserved to die. Until now. Until he falls in love with the innocent woman he's been hired to kill. Jake can't fight his attraction to Angela, and he knows that someone else will be sent to finish the job. So can he save Angela and redeem himself by uncovering who wants her killed? When the trail leads him into the carnal underbelly of L.A., the truth is more shocking than even he could ever imagine.

On the small patio table beside the chaise lounge sat an empty Jack Daniel’s bottle. When Jake had opened the bottle after returning from Angela’s condo, he’d vowed to drink it all or die trying. Now, eleven hours later, he almost wished for the latter.

He cursed the moon bathing him in a soft glow. The landscaping and pool lights were turned off because he wanted to drink and grieve in complete darkness. Anyone in his right mind would guess he was grieving for Angela Reardon. He wasn’t.

Jake Stone was grieving for himself.

He raised his glass, toasted the silence, and tossed back the final swallow of whiskey. Then he hurled the empty bottle over the edge, shattering it against something far below. His harsh laugh reverberated off the boulder-strewn hillsides.

His blurred vision landed on the photograph lying on the table beside him. The identification photo had arrived immediately after he’d accepted the contract fifteen weeks ago. Her blond hair was shorter, and Jake had never seen her wear the red dress that draped the curves of her body so enticingly. But Angela’s amazing eyes and inviting lips smiled back at him. His mouth moved with the memory of those warm, soft lips against his.

Pushing his head back into the cushion, he closed his eyes and wished that the liquor could erase his memories. But there was no chance of that. He was too well-trained—and too hardened a drinker—for the alcohol to wipe clean the slate of his mind.

He grimaced. That was only one of his skills. Many others were unspeakable.

As a Navy SEAL, he had been trained to kill efficiently. In fact, he’d done it so well the CIA had recruited him. Under their tutelage, Jake honed the skill of killing stealthily. He carried out political assassinations and sanctions. He taught himself how to murder cunningly. All of his later hits had been successfully disguised as suicides. When he got tired of politics muddling up his missions, he’d resigned.

After months of pleading, the Agency had convinced him to return as a contract assassin. The independence appealed to Jake. Instead of being ordered to carry out a hit, he could decide which contracts to accept. But even with the greater control, he burned out again after a year. He feared that killing was slowly, irreparably, destroying his soul. Although he’d quit with a welcome sense of relief, he still firmly believed that all his targets had deserved their fate.
Until now.
The hours he’d spent researching and investigating Angela hadn’t uncovered a single shred of evidence supporting the Contractor’s claim that she’d stolen and sold State Department secrets, resulting in an operative’s death.

Something was wrong. Someone was lying.

Whoever wanted Angela Reardon dead was the immoral, evil asshole who deserved to die. Not Angela.

Silently, he vowed to ferret out who and why. And then he would execute the bastard.

Jake laughed mirthlessly. He had killed for patriotism and for money. This time, he would kill for redemption. 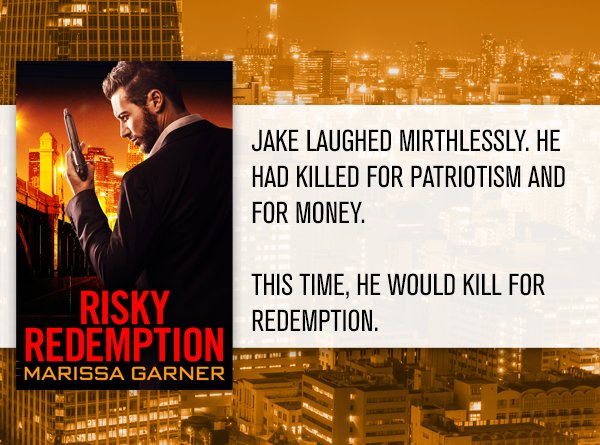 I'm a wife, writer, chocoholic, and animal lover, not necessarily in that order. As a little girl, I cut pictures of people out of my mother's magazines and turned them into characters in my simple stories. Now I write sexy paranormal romantic suspense, steamy contemporary romance, and edgy romantic thrillers. I live in sunny Southern California with my husband, but enjoy traveling from Athens to Anchorage to Acapulco and many locations in between.