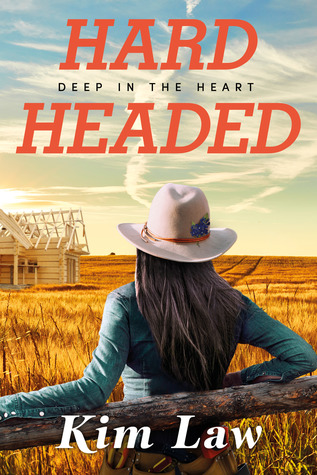 In Hardheaded (Deep in the Heart #1) by Kim Law, competing against her ex on Texas Dream home is not ideal, but Jill Sadler is determined to keep things professional and not let her usual quick-firing temper gets the best of her. However, no matter how hard she tries to ignore the sparks that still fly between them, Jill finds herself giving in. But will their second chance at happy ever after work out, or will Jill be left heartbroken all over again?

This is the first book I've read by Ms. Law, and it's a book that I absolutely loved because it combines two superb tropes in the enemy to lovers trope and second chance romance trope; encompasses fantastic main and secondary characters where the heroine shares such a tight bond with her foster sisters; and wonderful dialogue that had me loving the growing relationship between the hero and heroine, as they begin to find their way back to each other. Will the pair be able to forgive each other for the past? The way this story started had me loving what the heroine and her family are doing, as the photos they're having taken sound exciting and definitely something that could bring in more business for their construction company.

As for the dialogue, it was highly entertaining due to the hero and heroine's past; the tension between these two that made me think Jill was going to lose her infamous temper sooner rather than later; and the growing relationship between the hero and heroine that had me hoping Jill would be able to forgive Cal for what happened between them in the past. Moreover, the heroine was hard-working, driven, resilient and I liked how determined she was to win the contest. Would Jill's team show up Cal's? Yet, what I liked most of all is the tight bond the heroine shared with her family, which makes them the right people to give her advice. While the hero, he's a total family man and would do anything for those he loves, which is proven by the decision he made in the past that tore him and Jill apart; hard-working and driven with how well his company has done in the construction industry; and I liked how determined he was to earn the heroine's forgiveness, because they need to get over the past, if they're to have any chance at a future.

Overall, Ms. Law has delivered a really compelling read in this book where the chemistry between this couple was fantastic and strong; the romance wonderful; and the ending left me completely satisfied, as Cal was going to have to go big or go home. Certainly, what he does to prove to the heroine that he wants a second chance at forever is huge and definitely was something that took me completely by surprise. Since Cal giving up control of something that was very important to him was something I never imagined he'd do. Will the heroine accept all that he's offering? I would recommend Hardheaded by Kim Law, if you enjoy the enemy to lovers trope, second chance romances or books by authors Jamie Beck, Jill Sanders, Terri Osburn and Catherine Bybee.

Construction tip #1: Never anger a hot-tempered woman who knows how to wield a sledgehammer. And right now, Jill Sadler is spitting mad. Her company is competing on the wildly popular show Texas Dream Home, and she intends to give it her all. The opposition: We Nail It Contractors, helmed by the man who once married her…and walked out twenty-four hours later. Jill can’t let Cal Reynolds take this round. Not when she has her foster sisters and years of righteous resentment spurring her on.

Winning the contest would do wonders for Cal’s firm. Getting under Jill’s skin is just a bonus. She paints him as a villain, though Cal had no choice but to leave. Yet being around Jill again—fiery on the outside, vulnerable and warm underneath—is setting off sparks that can’t be blamed on faulty wiring. And the only way to fix the Jill-size hole in his heart is to risk everything and see if this love is built to last…