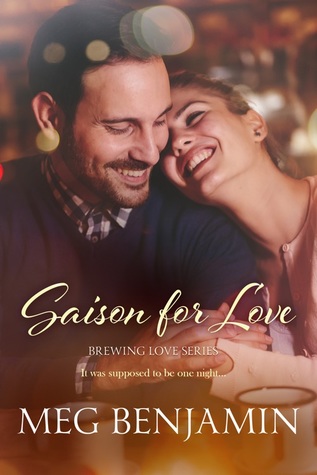 In Saison for Love (Brewing Love #2) by Meg Benjamin, Ruth Colbert isn't looking for love, but spending the night with Liam Dempsey is the perfect way to let off some steam. Not expecting anything more than one-night, Ruth is unprepared for Liam and his determination to spend more time with her. But with Liam looking to leave Antero, will he be able to convince Ruth to give him a shot at happy ever after; or will Ruth's past and her problems with her ex force her to put some distance between her and Liam?

Just like the first book of this series, Ms. Benjamin delivers a wonderful and engaging read. However, in this book the heroine faces a tough time because of her ex pressuring her to let him spend time with the daughter he rarely spends time with; and the hero having to decide what he's going to do in terms of leaving town or staying. The way this story started had me wanting to get to know more about the hero and heroine, as the heroine definitely needs to let loose and have fun and what a better way to do that than to spend a little time with the hero. What will the hero decide to do? Will the heroine be able to convince him to stay?

As for the dialogue, it was riveting, made this story fast-paced, and I loved every interaction between the hero and heroine as well as between the hero and the heroine's daughter, as she tries to get Liam's help because she wants her mother to say yes to something the young girl desperately wishes to do. I also liked the hero and heroine's back stories, as Liam hasn't had the easiest time with what happened between him and his sister when it came to their family legacy and the heroine has done her best as a single mother to raise her daughter while running her café.

The heroine is resilient, hard-working; finds it hard to open up because of what she went through with her ex; and I liked how protective she was of her daughter when it came to her ex. Will she allow her daughter to visit with her father, even knowing what the man is like in that he might not spend a lot of time with the young girl? I also liked how Ruth handled her ex and that she didn't allow him to get walk all over her when it came to making plans and expecting her to be amenable. While the hero, he's confident; hard-working; and I liked how determined he was to win the heroine over, even though he knows he's leaving and shouldn't get involved with her. I also liked the growing bond between the hero and the heroine's daughter. Really, the young girl is lucky to have Liam on her side.

Overall, Ms. Benjamin has penned another enjoyable read in this second book of her Brewing Love series where the chemistry between this couple was instantaneous from the moment they came face-to-face for the first time; the romance nicely-detailed and had me hoping that Liam would be able to win the heroine's heart; and the ending had me loving the decision the hero made because he needs Ruth in his life just as much as she needs him in hers. I would recommend Saison for Love by Meg Benjamin, if you enjoy the sister's friend trope or books by authors Jill Shalvis, Jenna Bayley-Burke, Shannon Stacey and Erin Nicholas.

Liam Dempsey isn’t long for Antero. The bar where he’s been working is going downhill fast, and it’s time for him to move on. Even if moving on means moving from Colorado to Utah and leaving his sister and fledgling brewery behind. He’s not interested in forming any attachments before he leaves in a month, but after a sexy hook-up with his sister’s friend, he finds himself unsure where his future stands.

The last thing Ruth Colbert needs is something else on her plate. She has a restaurant to run, a chef to replace, and a cranky twelve-year-old to raise, but a steamy night with Liam was just what she needed. The only problem is, now she wants more, if only she could find the time for him. Just when things seem to be working out and she can see a possible future with Liam, someone from her past shows up to throw another wrench into everything.