In Heartbreaker (Hollywood Hearts #2) by Belinda Williams, Lena Lyons is a hot Hollywood actress wanted by many, but there's one person willing to do whatever it takes to make her his. She's had stalkers before, yet this time is different. This time her stalker has gone too far and getting more dangerous by the second. Luckily, Marc Romero is on the job and determined to find the person responsible. Will he be able to keep Lena safe, even though he hates everything about Hollywood; or will his growing feelings for Lena put her in more danger?
Having been utterly entertained by the first book of this series, and getting a glimpse into the love-hate relationship Marc and Lena had, I couldn't wait to read this story and I've got to say that it was everything I'd hoped for and more. Because not only were Marc and Lena such incredible characters, but so were the secondary characters -- both new in Kaden and old in Lena's bodyguard Jay, her best friend Ally and Hollywood stars Chloe and Faith. The way this story started had me sympathizing with the heroine, as she's been through so much with being a Hollywood actress and having had stalkers in the past, so what is one more? However, this time is different, as the stalker has taken things a little further than the ones she had in the past.
The dialogue was well-written and intense due to the main characters back stories, the challenge Marc faces with Lena and what Lena is going through due to her stalker. Losing her mom was tough for Lena, but she's done well for herself and gotten to a place in her life where she loves what she does. No way is she going to allow anyone to make her feel bad about what she does and how Hollywood can make or break a person, especially not Marc and his nickname for her. Does he really see her as Hollywood royalty? Then again, he knows better than most what Hollywood can be like, because of who his family is and how they've always made him feel like an outsider for not having a creative bone in his body.
Both the main characters were enthralling, and the secondary characters added that little extra something to this story to make it more captivating, as Ally and Jay will do anything for Lena. Even if it means giving her advice she isn't sure what to do with. Will she give Marc a chance? Will Marc give in to the strong chemistry that is between them? As for the heroine, her resilience and courage made her an engaging character, as she's not about to let her stalker win. For sure, she'll adhere to some of the security measures implemented by Marc, but not all of them. She deserves to celebrate her life as a Hollywood actress.
While Marc, he's confident and good at what he does. He's lost people before as a Marine, and he's determined not to lose Lena. She's become everything to him, even if he's too afraid to admit it because of how he feels about Hollywood and everything that comes with being a part of it. I also liked the tight bond he shared with his daughter in what little time the young girl spent in the story. She's precocious, an absolute delight and I loved how she had everyone wrapped around her finger -- so to speak -- the moment she was introduced into this story.
Overall, Ms. Williams has penned a wonderful read in this book where the chemistry between the main characters was intense, the romance hot and the suspense took the main characters on a wild ride as Marc did his best to keep Lena safe. The way this story ended had me on the edge-of-my-seat due to the danger from Lena's stalker and worried whether Marc can find a way to let go of his guilt. However, what happens right at the end left me with a huge smile, as the hero finally realizes that Hollywood will always be a part of his life and he'd better get used to it. I would recommend Heartbreaker by Belinda Williams, if you enjoy the enemy to lovers trope or books by authors CD Reiss, Kahlen Aymes or Jamie Shaw.

BLURB
WHEN LOVE IS AN ACT, WILL HER HEART BE FOOLED?
Lena Lyons, one of Hollywood’s hottest female stars, has a celebrity problem: she’s too famous. Lena’s had stalkers before and figures the crazies come with the territory, but when things start going dangerously wrong on the set of her latest movie, her production company aren’t taking any risks. They hire Marc Romero, Hollywood security expert. And Lena thought stalkers were bad—Marc appears to hate his job and anything celebrity, including Lena.
Still reeling from her divorce, the last thing Lena needs is a brooding investigator who won’t let her out of his sight. Worse still, his plan to protect her involves him going undercover as an up-and-coming actor and pretending they’re a couple. Lena has no choice but to get close to the mysterious man who won’t share anything about himself.
With her life depending on her acting skills, she must convince everyone Marc’s the man for her. But will she be able to convince her heart it’s all an act? Escape behind the scenes with the second installment of the Hollywood Hearts series, perfect for fans of Rachel Gibson, Victoria Dahl, Susan Elizabeth Phillips and Liliana Hart.

Belinda is a marketing communications specialist and copywriter who allowed an addiction to romance to get the better of her. Belinda is the author of the contemporary romance series, City Love, about four young professional women living in Sydney juggling love, work, friendships and life. The series is published by Momentum (Pan Macmillan), and available from all major ebook retailers. Belinda is currently working on a new series: Hollywood Hearts. HEARTTHROB is available now, and the second book in the series, HEARTBREAKER, is due for release in June 2017.
Belinda was named a top ten finalist in The Romance Writers of Australia Emerald award in both 2013 and 2014. Her debut novel, Radiant, a paranormal romantic suspense, is also available on Amazon. Her other addictions include music and cars. Belinda is a music lover and her eclectic taste forms the foundation for many of her writing ideas. Her healthy appreciation for fast cars means she would not so secretly love a Lamborghini. For now she’ll have to settle with her son’s supercar Hot Wheels collection and writing hot male leads with sports cars. Belinda lives in Sydney, Australia.
Website | Newsletter | Facebook | Twitter | Pinterest | Goodreads 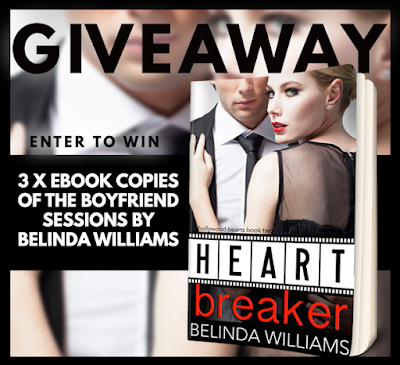