REVIEW: BLACKMAILED BY THE HERO by JULIE PARTICKA 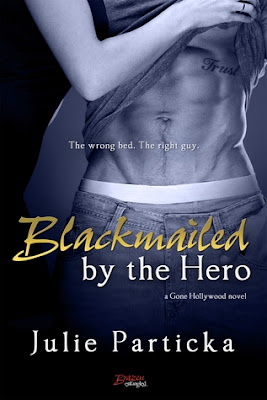 In Blackmailed by the Hero (Gone Hollywood #2) by Julie Partricka, Vicky Stone has decided she doesn't need a man to make her happy, but her best friend has thrown her a challenge to find a man and get laid. Except somehow, Vicky ends up in the wrong room only to discover her brother's best friend, Dante Palladino is on the receiving end of her attention. So, when he blackmails her into dating him, what is a woman to do but to agree? Will Vicky give Dante a chance at forever love, or did her ex cause her too much pain to give happy ever after another chance?

The brothers best friend trope is one of the best tropes in my opinion, and this story was an intriguing and satisfying read due to the main characters, most especially the hero; whether the hero can win the heroine over when she's already had one relationship that ended in divorce and has made her determined to remain single; and what Vicky's brother reveals that makes her brother realize how wrong of a decision he made when it came to her ex and Dante.

The way this story started had me liking the heroine immediately, as her friend is determined to get Vicky to let her hair down -- so to speak -- and finally find a man that can give her a night of wild abandon. Will Vicky be capable of propositioning someone? Will she go through with the plan if she does find a man to spend the night with? However, it was from the moment the heroine does something that leaves her embarrassed that this story became really interesting. Because the hero is determined to keep her out of the clutches of a total player, even if he has blackmail her to do so.

Both the main characters had me hooked from start to finish, especially because of their past history; what Vicky's brother did to make certain she wouldn't make a mistake, even though she ended up making one by marrying her ex; and the obstacles these two face on their journey to happy ever after. Vicky is strong and brave and I liked how determined she was not to rely on anyone, even though it seems she's struggling and everyone keeps offering to help her. Yet, she relied on someone once before and he didn't turn out to be all that good for her. No way will she ever look for someone to be her hero again, not when she can save herself. I also liked what the hero did for her to help her prove how she good she is at her job and prove to her boss that she deserves more responsibility.

While the hero, he's accomplished a lot going from being a well-known athlete to a movie star. He's confident and determined to do what's right for the heroine, and I liked that he would do whatever it takes to protect her, even knowing she'd be annoyed with him. I also liked the banter between the pair, as it certainly upped the sexual tension between Vicky and Dante until their wonderful chemistry spilled over onto the pages in sizzling sex scenes that illustrated how good these two are together.

Overall, Ms. Particka has penned a seriously hot and delightful read in this book where the secondary characters entertained me just as much as the main ones, especially Vicky's best friend who was a real hoot and made me laugh. The way this story ended had me smiling, because of what Vicky's best friend did and had me sympathizing with the hero because of what happened to tear them apart. Yet, in saying that, I enjoyed how the heroine made things right between them. Her words were perfect, especially because sometimes having a hero in her life isn't a bad thing. However, it was the epilogue that wrapped this story up nicely, because Vicky has finally achieved her dream and I liked the surprise she had for the hero. I would recommend Blackmailed by the Hero by Julie Particka, if you enjoy the brothers best friend trope or books by authors Liz Crowe, Samanthe Beck, Maggie Kelley or Megan Erickson.

BLURB
Party planner Vicky Stone is on a post-divorce mission. Not only does she intend to land her dream promotion, she's going to indulge in a night of hot hook-up sex. Preferably with the hunky actor she just met at a work function, no-fraternization rules be damned. Fortunately, his drunken directions included a right that should have been a left, landing her in bed with her brother's extra-hot, extra-off-limits best friend instead of the unemployment line.
And, oh, he feels good. Too good.
Bad boy Dante Palladino's forbidden fantasies are about to come true...until Vicky realizes who she's feeling up. And to find out she risked her job for sex with some loser? Not on his watch. Dante throws down the ultimate, albeit self-serving, blackmail. Vicky will date him-and only him-and her secret will be safe. But Vicky swore never to fall for another guy who could break her heart...and Dante's on course to do just that.
BUY LINK:  Amazon


Each book in the Gone Hollywood series is a standalone, full-length story that can be enjoyed out of order.
Series Order:
Book #1 Tempting Her Fake Fiancé
Book #2 Blackmailed By The Hero
Book #3 Playing the Perfect Boyfriend
at 17:27