REVIEW: FROST ON MY PILLOW by LEAH HAMRICK 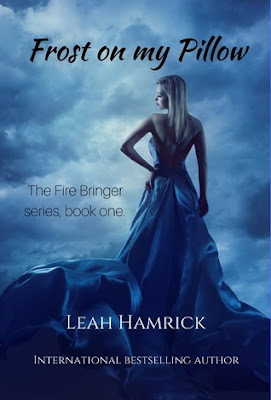 In Frost on my Pillow (The Fire Bringer #1) by Leah Hamrick, Lyla is a fire bringer; a paranormal capable of wielding fire. Fearing for her life, she leaves her home and everyone she's ever known only to be rescued by the one person that may be able to keep her safe. However, Rylan isn't who she wants and the moment she meets Ethan, she knows she's found the one boy she'll love for a lifetime. But with demons stalking her and the threat from her step-father bound to catch up with her sooner or later, will Lyla come out on top in the fight for her survival or will she crash and burn?
This story gave me mixed emotions, not only because it ends in a cliffhanger and there's no warning on the blurb that says it does, but because I thought after such a promising start that it would have a lot more drama on the paranormal side than it did. Instead, there was the typical school drama such as the harshness of a mean girl and how jealousy can make one say things they regret, a love triangle that had me cheering for the underdog (Rylan), and although this did end with a cliffhanger, it was a powerful ending that has me curious enough to want to see what happens next.
As for the dialogue, it was intense due to the main characters back stories, especially that of the heroine. She's been through a lot in her life and it was hard not to sympathize with her need to run away. However, the heroine is also very naïve, so the way the plot went after the halfway mark I thought could have gone differently. Why couldn't the spell used on her turn her into someone else, instead of turning her how it did? Because what she did become was a tad eerie, considering her relationship with Ethan.
As for the heroine, I liked her inquisitiveness and her desire to get to know everything that she's not used to where she comes from. She's also strong and brave in all she's survived and all she faces throughout this story, as there are some truly scary moments that show how evil the paranormal world can be. However, I found it hard to understand how the people of her world didn't come after her more, considering what she did to escape her world in the first place. While Ethan, I liked the lengths he was willing to go to protect Lyla and how he opens up to her about his mom and what the woman is going through. I also liked what his mother did to embarrass him, because she wants him to be safe. However, what I liked most is that Ethan was willing to allow Rylan to help the heroine, even though he was jealous of the other guy that Lyla was quite fond of.
Overall, I did like this book where the chemistry between Lyla and both the men in her life was good, and the romance between Ethan and Lyla was strong and illustrated how good they are together. The way this story ended is to be continued and does leaves readers hanging, but it will also make readers intrigued because of what does happen. Will Lyla be all right? Will Rylan be able to find her and save her? I would recommend Frost on my Pillow by Leah Hamrick, if you enjoy a story that combines the New Adult and Paranormal sub-genres of romance, or books by authors Kate Fitzroy, Aya DeAniege or Jamie Sedgwick.

BLURB
One girl, one voice, one necklace with the power to change the universe if fallen into the wrong hands…

One love that’s sure to show in the stars…

One boy who will do anything to protect her, even if that means laying down his own life to keep the demons from her…