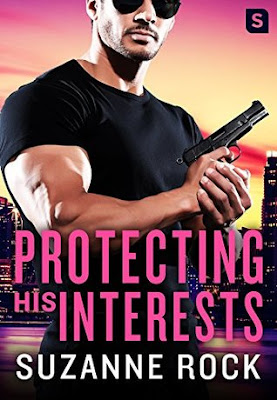 In Protecting his Interests (Hot Heroes in Blue #1) by Suzanne Rock, Scarlett Bishop needs a date, so she decides to hire a high-end escort. She knows she should keep their date strictly professional, but when Gabriel Ferreira is the man escorting her, how can she possibly not think about giving in and accepting the pleasure he could give her? Because it's not as if they don't already know each other since they used to be High School sweethearts until Gabriel broke things off between them. However, when Scarlett discovers Gabriel is more than he seems, will they get their second chance at happy ever after or will his case prove dangerous for them both?

This is the first book I've read by Ms. Rock, and I really enjoyed it due to the main characters past history; discovering whether Scarlett can give the hero another chance because she has serious trust issues; and the investigation into the case the hero is working that puts the heroine in the path of the bad guys, which ends up turning her life upside down. The way this story started had me charmed with the friendship the heroine has with her assistant because her assistant is sassy and wants Scarlett to show everyone that her split with her ex hasn't affected her as much as her ex and those that know her think it has.

As for the dialogue, it was engaging, fast-paced and had me continually wanting to know whether Scarlett would be able to handle the emotional blows delivered to her throughout, especially when it came to her career. Will her business be able to bounce back from all the bad publicity she's receiving because she's helping Gabriel with his case? Will she be able to handle the betrayal of those she thought she could trust? Moreover, the heroine is resilient, courageous and I liked how determined she was to help Gabriel, despite the fact that she could land herself in a whole lot of trouble, which is proven by the moment she does something Gabriel asks of her. However, her need for control and through that showing Gabriel he could trust her was a tad exasperating, even though, at the same time I could understand her need to be in control because of all she's been through in her past.

While Gabriel, he was a fantastic hero and I could understand his need to keep the secrets he does. He's an undercover cop and it isn't easy for him to trust anyone, even though he knew Scarlett years ago, it doesn't mean that she hasn't changed. Can he still trust her? Will she help him like he hopes, even though what he wants her to do will put her in danger? Then there's the couple's past history that made me sympathize with both of them. He wanted Scarlett in his life and there's no way he's going to throw away this second chance, even if it means explaining why their relationship ended years ago. Certainly, he called things off for the right reasons; reasons that had to do with honoring and helping family.

Overall, Ms. Rock has penned a fascinating read in this book where there was plenty of hot romance and strong chemistry between the characters that had me hoping Gabriel would eventually win Scarlett over, considering all his investigation drags her into. The way this story ended had me on the edge-of-my-seat because of the danger the main characters were in. However, I enjoyed how things turned out between Gabriel and Scarlett, because they deserve a second chance at happy ever after. Besides, the surprise offer Scarlett had for Gabriel would certainly allow them to spend more time together. I would recommend Protecting his Interests by Suzanne Rock, if you enjoy romantic suspense, the second chance romance trope, or books by authors Cora Seton, Cat Johnson, JT Geissinger or Elle James.

BLURB
What if the roles in the movie Pretty Woman got switched?
After spending months undercover at a high-end escort service, Special Agent Gabriel Ferreira hits a dead end in his case. Then a gorgeous art restorer picks him as her date, and his luck changes in more ways than one.
Gabe won’t let Scarlett Bishop come between him and his goal of taking down Miami’s newest serial killer, no matter how great she is in bed. Unfortunately, the more he tries to distance himself from the sexy redhead, the more tangled up she becomes in his investigation. Now she has a target on her back, and he must figure out her connection to the killer and keep her safe at the same time. Every second he spends with the sarcastic beauty, he becomes more infatuated.
Now if only he can keep his hands off of Scarlett’s gorgeous body and concentrate on his mission before they both become pawns in the killer’s dangerous game.
BUY LINK:  Amazon
at 12:43