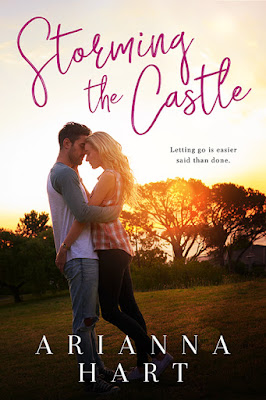 In Storming the Castle (Dale #3) by Arianna Hart, Sam Castleton is worried that he has a drinking problem and can't seem to write any songs for his upcoming album. So, he's decided to go completely off the radar in order to get his head on straight. Arriving in Dale, Georgia makes him feel better than he has in a while, especially once he meets single mother, Faith Adams. But Sam is only going to be in town for two months, there's no possible way he could start something with her. However, the more time Sam spends with Faith, the more he wants to make their growing relationship permanent. Will Sam be able to convince Faith to give him a shot at happy ever after, or is the fact that their lives are worlds apart keep Faith from getting the second chance at love she deserves?

I've read several books by Ms. Hart and enjoyed all of them, but this is the first book I've read of this series, and I've got to say it was a riveting and fast-paced read that held my attention from start to finish. The way this story started had me liking the hero immediately, because he's making the best decision he's made for himself in quite a while and it's about time he finally starts to see how his life as a musician is leading him down a path he doesn't want to stay on. Will he be able to write songs once he gets himself straightened out? Will he find a way to cease the terrible drinking habit he has? However, it was from the moment the hero and heroine came face-to-face for the first time in this story that had me hooked, because Sam is willing to do whatever it takes to make sure his stay in Dale remains a secret.

Both the main characters were entertaining, as to were the secondary characters that are determined to see Faith happy. The heroine's friends are wonderful, especially Mary Ellen who is a total hoot and says whatever is on her mind. Moreover, the dialogue was compelling and made this story a real page turner, as Sam and Faith get to know each other, the battle Faith faces for custody of her daughter and whether the hero and heroine can overcome the major obstacle they face to achieve their happy ever after. Will Faith take a chance and put her trust in Sam? Will Sam prove that he's nothing like her ex-husband, even though his profession has women tempting him all the time?

As for the heroine, she's been through so much since her husband's death after discovering his betrayal. Having to care for her daughter all alone has been a wonderful experience for her, as her daughter is inquisitive, loves exploring and brings absolute enjoyment to the lives of everyone she meets, especially Sam although they get off to a rocky start. However, I felt sorry for Faith when it came to the custody battle she faces and whether she'll win. While Sam, he was such an enjoyable hero and I loved the challenges he faced along the way with the heroine, his music and his battle to stay sober. I also liked the words to the songs he composed and the things he did for the two females in his life at the moment. His words and actions were heartwarming and showed how much he's come to care for Faith and her daughter.

Overall, Ms. Hart has penned a wonderful read in this book where the chemistry between the main characters entertained me from start to finish, especially when they finally moved their relationship from platonic to physical and Sam made Faith feel loved for the first time in a long time when it came to men and relationships. The way this story ended had me cheering for this couple's happy ever after, as Faith needs to realize that she can trust Sam, especially when he's trying to do everything possible to be with her. However, what I liked most about the ending was the decision Faith made when it came to the custody battle for her daughter and the surprises the hero and heroine had for each other. I would recommend Storming the Castle by Arianna Hart, if you enjoy small town romances, the opposites attract trope, or books by authors Ashlee Mallory, Heather Long, Robin Bielman or Sarina Bowen.

BLURB
Sam Castleton has fame, houses all over the world, and one really big problem—he’s got an album due and he can’t write. All he wants is a quiet place to get his head straight. Dale, Georgia, seems like the perfect quiet spot to try to hear the music again and get some lyrics down on paper.

With her daughter’s paternal grandparents making a sudden appearance and the difficulties of running her own lodge and being a single mom, Faith Adams doesn’t have the time to worry about the mysterious stranger staying in one of her cottages, no matter how sexy he is.

Her newest guest may be surly, but his money is good, so she’s willing to overlook his surly nature. If only she could ignore the way he awakens a searing hunger in her...

Arianna Hart enjoys spending time with her family, reading anything she can get her hands on, and of course writing! She’d love to spend her days on a beach with a drink in one hand and a book in the other, but until she wins the lottery she’ll just have to settle for chasing her girls around the pool.
Connect: Site | Facebook | Twitter | Goodreads

a Rafflecopter giveaway
at 23:46