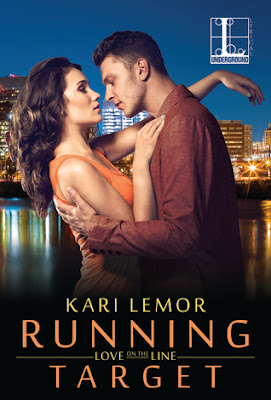 In Running Target (Love on the Line #2) by Kari Lemor, learning from Angelo Cabrini, the son of a mob boss, that the woman he was secretly seeing was pregnant, FBI agent Jack Holland will do anything to keep her safe. Except things don't turn out like he hopes, and instead he finds himself on the run after killing Angelo. Even worse, if mob boss, Victor Cabrini, ever learns the truth that Callie's baby isn't his grandson, all hell will break loose. Can Jack find the evidence he needs to put Victor behind bars for good, or will he and Callie's chance at happy ever after never happen?

Ms. Lemor's incredible writing skills shine in this second story of her Love on the Line series, as she takes readers on a captivating journey about a couple hopefully finding their way back to each other to achieve their happy ever after; a hero needing to remain under the radar from the bad guys while trying to discover the evidence to take them down; and a heroine that will do anything to protect her son, even if it means deceiving a very bad man. The way this story started had me concerned for the hero, as aggravating the son of a mob boss is dangerous, which is proven by what happens to Jack. Will he be okay?

As for the dialogue, it was well-written, intense and took me on a wild ride due to the challenges Jack and Callie face and I was drawn in by the emotional rollercoaster these characters endure. Everything from the joy their son provides them to the anger towards the situation Jack has found himself in to the fear that something will happen to one of them and the love Jack and Callie have for each other had an effect on me, and had me turning the pages quickly determined to discover what these two would face towards the end to achieve their happy ever after.

Both the main characters are captivating due to their back stories and their growing relationship. All Callie has ever wanted was to be loved and be a part of a family, which was something she never experienced with her own. However, learning the truth about Angelo and his father was devastating and I could understand why she took the measures she did for her and her child. Do the rewards outweigh the risks? Moreover, the heroine is resilient, courageous and I liked how determined she was to keep her son safe, even if it meant doing something she didn't want to do. I also liked that she was willing to take the risk that she did, because she and Jack needed to be free of the threat to their lives, if they were to ever be together.

While Jack, he goes through so much in this story and I couldn't help but sympathize with his situation. He broke the rules by getting involved with Callie, and yet, it's the best thing he's ever done. Moreover, I liked how Jack did everything in his power to be there for Callie and his son, no matter how dangerous it could be for him. I also liked how protective he was of those he loved, and that he would do anything to keep them safe, even if it meant doing the hardest thing he's ever had to do in respecting Callie's wishes. Will he be able to keep his distance?

Overall, Ms. Lemor has delivered a scintillating read in this book where the chemistry was riveting; the secondary characters entertained me just as much as the main ones; and the ending took me completely by surprise with what happened to the bad guy, yet left me with a bright smile on my face because of how things turned out between Callie and Jack. They're so lucky and deserve all the happiness they achieve in the end, especially Callie's surprise. I would recommend Running Target by Kari Lemor, if you enjoy romantic suspense, the second chance romance trope, the sexy protector trope or books by authors AJ Nuest, Kelly Moran, Laura Griffin or Cate Beauman.

BLURB
An innocent in the crossfire . . .
FBI agent Jack Holland broke every rule in the book falling for the girlfriend of Angelo Cabrini, son of a New Jersey mob boss. But even if Callie Lansing’s relationship to Angelo was actually a cover and her heart was free, her relationship with Jack put both of their lives at risk. Nothing, though, could make Jack regret the liaison that led to the birth of their son, Jonathan.

After Angelo discovered Callie’s pregnancy, he went after Jack and wound up dead. Now Jack is on the run with a target on his back. The only thing keeping Callie and Jonathan safe is the mob boss's belief that the baby is his grandchild. But if Victor Cabrini discovers the truth before Jack can put him behind bars, it could mean death for his sweet covert family. . . .
BUY LINK:  Amazon
at 19:30