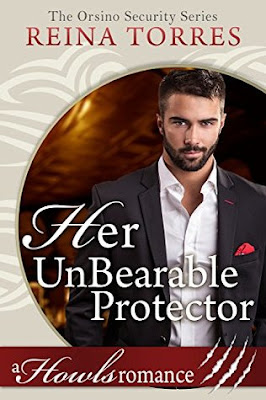 In Her Unbearable Protector (Howls Romance #14) by Reina Torres, guarding someone who is receiving threats is all part of his job, but bear shifter Salvatore Orsino is taken completely by surprise when he discovers his client is his mate. Keeping Natale Durante safe is his number one priority, however there's no reason not to try and convince her that they're meant to be together. Yet, Salvatore knows that pushing her to accept their bond isn't the way to go, so he does his best to remain patient. But with the threats becoming more dangerous, will Salvatore be able to keep Natale safe, or will he lose her before he can reveal the truth of his other half?

Branching out to writing a paranormal romance proves absolutely no problem for Ms. Torres, as she enchants and takes readers on a thrilling and exhilarating journey of suspense and romance in this story that I could not put down. The way this story started had me concerned for the heroine's safety and agreeing with the course of action Natale's father wants to take. She needs a bodyguard after the threats and there's no one better than those of Orsino Security.  Yet, what I liked most about the start of this story was the moment Natale and Salvatore met. Both are taken by surprise because the hero is absolutely intimidating, and yet, Natale has no problem standing up to him and giving her opinion.

Both the hero and heroine were charismatic and I loved every moment they conversed. Natale is strong, brave, feisty, and I loved how much of a challenge she provided for Salvatore. He's supposed to be her bodyguard, and yet, there's no way she's going to adhere to everything he says, especially when she has work to do to get her fashions ready for her big show. I also like how accepting she was of Salvatore's dual nature, despite the scary moment where she learnt the truth of it. Then there's the opposition she faces from Salvatore's brothers. Luckily, she's not afraid to stand up for herself against them either, and I liked how she won them over.

While Salvatore, he's confident, protective and I loved how his bear challenged him to go after what they both want. Certainly, Salvatore had a fight on his hands when it came to his bear and making sure they didn't frighten Natale by introducing her to the paranormal world before she was ready. Then there's the way Salvatore stands up to his brothers when it comes to Natale. No way is he going to allow them to come between them, especially after the moment where she learns the truth.

Overall, Ms. Torres has delivered a wonderful read in this book that had the perfect blend of romance and suspense. The way this story ended had me concerned for the main characters, but didn't surprise me at all when it came to the person responsible for the threats. The person who did it was devious and had the dialogue to match their jealousy. However, what I liked most about the ending is how things worked out between Salvatore and Natale and I loved their words to each other, as they cement their relationship with Natale finally ready to make their relationship permanent. I would recommend Her Unbearable Protector by Reina Torres, if you enjoy paranormal romance or books by authors Celia Kyle, Mina Carter or Milly Taiden.

BLURB
The head of Orsino Security was hired to protect her for a week. Instead, his bear wants to claim her forever.

It takes one look for bear shifter Salvatore Orsino to know that Natale Durante isn't just his client… she’s his mate. His first instinct is to lay Natale’s curvaceous body over his shoulder, find a den, and claim her with his bite. But, this beautiful head-strong woman only grudgingly endures his protection even as she welcomes him in her bed. He’ll have to set aside his bear’s need to mark her until he’s eliminated the threat to her life. Once she’s safe, he’ll turn all his energies convincing her that he isn’t after a short-term dalliance, he wants her, with him… forever.

Natale Durante knows that Durante Fashion House is on its last legs. Her new line, designed for women of every size and shape, is her last attempt at saving her family’s legacy. But there are those in high fashion who prefer that things stay the same—curves belong on the road, not the runway. When complaints and hate mail escalate to threats of bodily harm, her father hires a bodyguard—Salvatore Orsino. He’s over six feet of deliciously seductive muscular male and a distraction she can’t afford. One look from him and she wants her infuriatingly persistent protector to rip off her clothes with his teeth, or she might do the same to him.

Can Salvatore eliminate the threats to Natale or will he lose her before he has a chance to claim her?
PRE-SALE ON NOW AND RUNS UNTIL JUNE 30th
BUY LINK: Amazon