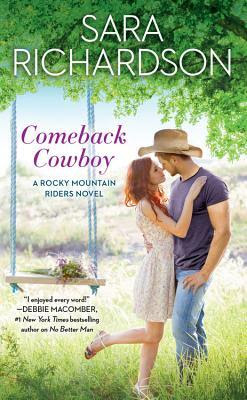 In Comeback Cowboy (Rocky Mountain Riders #2) by Sara Richardson, Lucas Cortez is home for the time being, ever since he learnt of his father's illness. Staying and working the land alongside his brothers isn't an option, not when there's so much hostility towards him still after what he did so many years ago. But Lucas has never forgotten the woman he left behind, and he wants a second chance with Naomi Sullivan. Except with the secret he's keeping, how can he ever expect her to give him one unless he reveals the truth. Can they move on from the past together, or will they lose a second chance at forever love because of someone's determination to make sure Lucas leaves town?

Ms. Richardson has penned a small-town marvel in this book that dazzled me with its enchanting and fast-paced storyline, incredible characters that entertained me from start to finish and its wonderful ending that could have had dire consequences for one of the most precious characters in this story, but shows love can conquer all. The way this story started had me hooked because the heroine is finally ready to follow her dream and I liked how enthusiastic she is in the moment where she's looking to get what she wants to start achieving her dream. Will she get what she wants? However, it was from the moment the hero and heroine come face-to-face for the first time in this story where things start to get very interesting, as the way they meet isn't how Naomi imagined. What if she'd managed to hurt him?

As for the dialogue, it was compelling due to their growing relationship, the secrets both the main characters are keeping and their past that has led them to hopefully getting a second chance at love. Both their secrets have them being judged a tad harshly by those that believe Lucas shouldn't be able to reside in their small town because of what he did years ago and believe that Naomi should know the answer to her secret. Will the truth come out and if it does will Naomi and Lucas be able to handle the truth? Furthermore, the heroine is strong and brave with everything she has to deal with throughout this book, especially when it comes to her daughter and whether Naomi can give Lucas another chance. I also liked how good of a mother she is and that she would do anything for her daughter, even though it isn't easy for her when it comes to having to share the young girl with her ex.

While the hero, he's been through a lot in his life and doesn't believe he'll ever be able to live in the small town without being challenged by those that don't want him there. Does he leave town or fight for his future with Naomi? Will he be able to win over Naomi's daughter? Moreover, I liked how determined he was to help Naomi achieve her dream and how protective he was of his family and of Naomi and his daughter. No way would he allow anyone to hurt them because of him.

Overall, Ms. Richardson has penned another fantastic read in this story where the chemistry and romance was sizzling and illustrated the intense connection these two had wonderfully. The way this story ended was perfect, as Naomi and Lucas could finally have their second chance at love due to the startling revelations about the past and the effort the secondary characters went to in helping defend Lucas. Yet, it was the epilogue that wrapped this story up nicely, as it shows the importance of family and how amazing surprises can be, especially for Naomi's daughter. I would recommend Comeback Cowboy by Sara Richardson, if you enjoy the second chance romance trope, small town romances or books by authors Carolyn Brown, Maisey Yates, Kari Lynn Dell or Lori Wilde.

As a single mother, Naomi Sullivan is used to doing things on her own. She's finally saved enough from working at the Cortez Ranch to buy a lovely home for her and her little girl. Life is going as planned. But when her high school sweetheart comes riding back to town, this self-sufficient woman feels something she hasn't felt in years: red-hot, unbridled need for the handsome cowboy who left her behind.

Lucas Cortez doesn't plan on being in town long. Yet when he sees Naomi again-the gorgeous girl he never stopped loving-he's tempted to hang up his hat and stay awhile. He's already charmed his way into her daughter's heart, but he'll need more than sweet talk and roses to convince Naomi to give them a second chance-especially when she's hiding a secret that could change their lives forever . . .
BUY LINK:  Amazon
at 23:03