REVIEW: VANISHING ACT by AM MADDEN 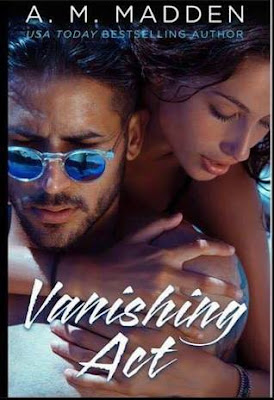 In Vanishing Act by A.M Madden, Landon Price needs time away from all Hollywood offers, especially the false rumors and accusations that help people get their fifteen minutes of fame. Taking a much needed break at Hawaii is the perfect solution, except he never imagined he'd find his dream woman. Keeping his Hollywood identity a secret seems crucial, if he's to make her realize they have something special. But when the truth comes out and the paparazzi learn about their relationship, will their relationship survive the media storm or will Landon do the only thing he can to protect her from the sharks, which is to walk away?

Ms. Madden is an author that always manages to cast a spell over me with her stories and have me reading them from start to finish in one sitting, and this stand-alone contemporary romance was no different. Seriously, it was an enchanting and fast-paced read due to the cocky and confident hero that enjoys teasing the heroine, the main characters back stories and the ending that had me wondering how things would be made right between them. The way this story started had me sympathizing with the hero, as Hollywood has been brutal to him due to rumors and lies and he needs a break. And seriously, who can blame him?

The dialogue was enjoyable and I loved the teasing banter the hero liked to dish out to get the heroine to blush. There's eight years difference in age between them, and the heroine is fairly innocent, so he gets good reactions out of her. However, the dialogue was also intense due to the main characters back stories, especially that of the heroine. Her father is overprotective due to reasons why they left their home country and I could understand her need for independence. Why should she continue to be scared of what happened so long ago, even if she lost her sister as tragic as her family did? Why didn't she deserve to find her own happiness, instead of worrying what could happen?

Both the main characters were riveting and had me hooked from the moment they met, because of how they met. Who knew a dog could be so clever? However, it was their growing relationship, the secret the hero is keeping that could blow up in his face when the heroine learns the truth, and the characters back stories that made this story totally engaging. The heroine's fight for independence, her strength in the way she finally stands up to her father and the way she is with the hero; a way she's never been with anyone else just made her such a fascinating character and had me hoping she finally gets everything she's wants after the lose her family suffered and the reason her father is so overprotective.

While the hero, he totally impressed me because he's confident and cocky like the Hollywood star he is, but he also has a kind and caring side that shows he isn't a stuck-up Hollywood type. Instead, he treats everyone equal to him. I also liked how protective he was of the heroine and the sacrifice he's willing to make to ensure their relationship doesn't damage her relationship with her father. Yet, what I liked most about the hero is that he was finally starting to do what he wanted for his life, instead of allowing his agent or those that help his career to continue to dictate what he should or shouldn't do.

Overall, Ms. Madden has proven once again that she's a brilliant author when it comes to writing contemporary romance where the sex scenes were hot and Landon shows Zara how good love can be. The way this story ended had me wondering whether the hero and heroine would find their way back to each other after their relationship falls apart. Luckily though, they're both willing to fight for their future, no matter what challenge they face with her family or his fame. Moreover, the epilogue wrapped this story up wonderfully, because the heroine needed to face the fallout her choosing Landon had with those she loved. Will she get what she wants? I would recommend Vanishing Act by A.M Madden, if you enjoy Hollywood romances or books by authors Sarah Robinson, Kristen Callihan, Heidi McLaughlin or AL Jackson.

BLURB
In this captivating standalone romance from the USA Today bestselling author of Stone Walls, Hollywood’s hottest actor meets his dream woman: a free spirit who has no idea who he is.

After personal heartbreak and professional setbacks, Landon Price is running on empty. If he doesn’t take a break from the public eye soon, he’ll risk becoming another cautionary tale in a town that’s full of them. So in between film projects, Landon asks his agent to clear his schedule and then he simply . . . vanishes. Renting a discreet home on a remote Hawaiian beach for the summer, Landon begins to recharge. And in the process of finding himself, he meets a beautiful, feisty local who challenges everything he thinks he knows.

Zara Jobert has no interest in being a conquest for a cocky playboy from the mainland—even one with undeniable charisma and movie-star good looks. So she’s pleasantly surprised when the handsome newcomer’s persistent advances mellow into cozy banter and a sneakily seductive intimacy. When Landon reveals his true identity, Zara’s hurt that he lied, but she doesn’t care that he’s famous. Unfortunately, not everyone feels the same way. And falling for Landon might come with a heartbreaking choice—between Zara’s old life, and a new love.
BUY LINK:  Amazon