Today we have the blog tour stop for
Blackmailing the Bad Girl by Nina Croft.
Check it out and grab your copy today! 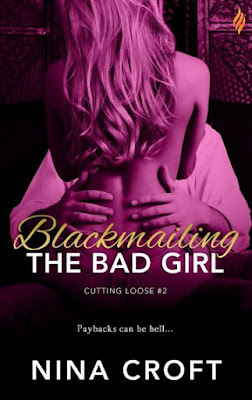 In Blackmailing the Bad Girl (Cutting Loose #2) by Nina Croft, Nik Masterton has been hurt before, but what Summer Delaney did to him was a blow that he never thought she'd deliver. She seemed so sweet and innocent during all the time they spent together, but still she stole money from him and disappeared. Discovering she's been in prison for the past two years, he's determined to exact his revenge when she's released. Yet, when he discovers the truth of why she resorted to being a thief, will he help her when trouble arises from the things she did; or will they lose their shot at happy ever after?
What a delightful journey Ms. Croft takes readers on in this second story of her Cutting Loose  series where she works her magic again in writing an enemy to lovers and revenge trope encompassing story that entertained me from start to finish due to the wonderful main characters in a gorgeous but cynical good guy being matched with an intelligent bad girl determined to keep her secrets. The way this story started had me intrigued because of the hero and what the heroine did to him. What will he do to make her pay for what she did? Will the heroine agree to the terms Nik sets if he goes through with his blackmail? Will she have a choice, considering what she did to him?
The dialogue was captivating, well-written and made this story a real page turner due to the main characters back stories, especially that of the heroine; and the history between the hero and heroine that has Nik wanting to exact his revenge. The heroine did what she did for the right reasons, and I liked what Nik does once he discovers things about Summer's past. Will he be able to convince the heroine that he can help when she believes trouble will come knocking at her door -- so to speak? Moreover, the heroine is resilient and courageous when it comes to all she's been through in her life due to what happened to her mom and how her life was turned upside down because of that moment. I also liked how determined she was to right the wrongs of her past, and how she started her mission with the ideas she came up with while in prison.
While the hero, he's totally different than the heroine's vision of rich people; people who think they can get away with anything just because they have money. I also liked his integrity when it came to his position as CEO, since there's no way he'd associate with any company he suspects of any wrongdoing. Yet, what I liked most of all about the hero is his determination to prove to the heroine that she can trust him. Certainly, what he's doing for her is a step in the right direction, even though he's blackmailing her to get what he wants.
Overall, Ms. Croft has penned a fantastic read in this book where the chemistry was strong, the romance scorching and the ending absolutely perfect, because no way is Nik about to let Summer get away. His words and his actions prove how much he wants her in his life. However, it was the epilogue that wrapped this story nicely, because Summer has great friends in the women that helped her survive her prison time and they will do anything to help each other. Yet, what I liked most about the epilogue is Nik's surprise for the heroine, because he wants her to follow her dream. I would recommend Blackmailing the Bad Girl by Nina Croft, if you enjoy the enemy to lovers trope, the revenge trope or books by authors Brooklyn Skye, Candace Havens or Lauren Hawkeye.

BLURB
Cynical CEO, Nik Masterton, believes he’s finally met a woman who isn’t interested in his money…until she vanishes with a hefty amount of it. He’s been searching for her ever since and has finally found her doing a stint in Holloway prison for stealing...from someone else. Clearly, he’s just one of many. Now she’s coming out, and it’s time for a little payback.
After two years in prison, Summer Delaney is determined she’s never going back. While she had good reasons for doing what she did, it’s time to move on to a new life and earn an honest living. Unfortunately, there’s a glitch in her plan, and he’s waiting at the gate as she comes out.
Nik isn’t above using blackmail to make Summer work for him until he decides just how he’ll get his revenge. But this time they’re both determined to keep their distance. Right until the inconvenient attraction explodes between them...
Get Your Copy Today!
Amazon | Amazon AU | Amazon UK | Amazon Canada | Barnes & Noble | Kobo | iBooks
About Nina Croft:
Growing up in the cold, wet, north of England, Nina Croft spent a lot of time dreaming of faraway sunnier places and ponies. When she discovered both, along with a whole load of other things, could be found between the covers of a book, her life changed forever.
Later, she headed south, picked up the perfect husband along the way, and together they volunteered to work in Africa. There they discovered a love of exotic places and a dislike of 9-5 work. Afterward they spent a number of years travelling (whenever possible) intermingled with working (whenever necessary.) Eventually they stumbled upon a remote area in the mountains of southern Spain and the small almond farm they now call home.
Nina spends her days reading, writing and riding her mare, Gencianna, under the blue Spanish skies—sunshine and ponies. She reckons this is proof that dreams really can come true if you want them enough.
Connect with Nina:
Website | Twitter | Facebook | Instagram | Goodreads | Newsletter
at 21:58