REVIEW & GIVEAWAY: THROUGH YOUR EYES by SHANNYN SCHROEDER 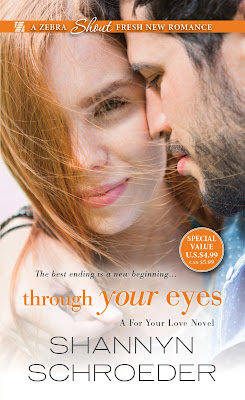 THROUGH YOUR EYES
For Your Love #3
Shannyn Schroeder
Releasing May 30th, 2017
Zebra Shout

In Through Your Eyes (For Your Love #3) by Shannyn Schroeder, Deidre Murphy has returned to America to visit her cousins. The break is a well-deserved one, especially when her whole life has been planned for her and it seems she'll never get a say on her future. However, meeting Tommy O'Malley changes her life for the better. Will Tommy be able to convince Deidre to stay in America, so they can have their chance at happy ever after; or will she be the good girl that she is and return home to a future she's not to keen on?
Having enjoyed the first two books of this series and the tight bonds of the O'Malley siblings, I couldn't wait to read this story, because Tommy has charmed me from the very first book and he did it again in this one. The way this story started was a great way to introduce readers to the heroine, because her relationship with her boyfriend isn't going the way she thought it would be going and I liked that Deidre's cousin wasn't afraid to offer her opinion. Would Deidre listen to her cousin? Yet, it was from the moment the hero and heroine came face-to-face for the first time that had me riveted, because Tommy knows what he wants and goes after it. Will he win Deidre over?
As for the dialogue, it was intense due to the main characters back stories and the way the plot kept surprising me in terms of what the heroine learns about her boyfriend that leaves her shaken, what the hero is determined to do to keep Deidre in his life and the way this story ended with what Tommy does by jumping to the wrong conclusions. However, there were fun times too with the heroine that had me smiling or laughing, especially the 'men-suck drunk' moment that leads to Deidre doing something that she wouldn't normally do; and the moments where she has embarrassing run-ins with one of Tommy's siblings. Will Deidre ever be able to face said sibling again?
Both the main characters were interesting and entertaining, most especially the heroine. She's strong, brave and has to handle so much throughout this story such as her boyfriend's shocking revelation and her family's attitude towards her choices for her future. Will she cave because of how her family feels or will she stay strong to how wonderful her future has become? While the hero, I could understand why he was protective of the heroine because of what happened to someone he loved. I also liked how he challenged the heroine to do something she wouldn't dream of doing, because he wanted her in his life. Yet, what I liked most about the hero is how he stood up to his family's opinions when it came to his and Deidre's growing relationship. They needed to realize how important she was to him.
Lastly, this was a nicely-penned story where the romance and chemistry was sizzling and the ending was wonderful, despite Tommy's error in judgment. However, I liked how things turned out between this couple in the way Deidre needed to make Tommy understand that he was the only man for her. Yet, it was the epilogue that wrapped this story up really well, because Tommy and Deidre showed an important person how right they are for each other. I would recommend Through Your Eyes by Shannyn Schroeder, if you enjoy the opposites attract tropes.

BLURB
ONE LAST CHANCE
Deirdre Murphy has had her life planned for her since she was born: Work in her parents’ noisy pub in rural Ireland. Live with her family until she marries. Marry her childhood sweetheart ASAP, since he’s decided sexy fun time should wait for marriage. None of it excites her. But before her fate closes in, Deirdre’s got one last visit to her Chicago cousins—where she can spend her mornings in a peaceful bakery, keep to herself, and savor the space she needs…. Until she meets Tommy O’Malley.

Tommy is as tough as his city and twice as ready to welcome her in. He’s covered in tattoos, stays up half the night inking them on other people, and has a reputation for being good with his hands. And he’s heart-pounding, forgot-her-words, can’t-stop-staring exciting.

Tommy knows he’s the opposite of everything Deirdre has prepared for. But to watch her set herself free, he’s willing to risk almost anything…

Don't miss the other FOR YOUR LOVE titles! 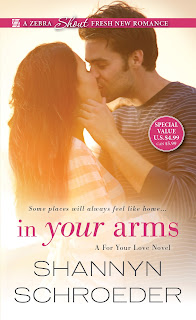 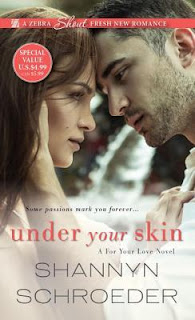 He drove to the bakery and found a parking spot in front. It was near closing and the business was empty.
He walked through the door and a sweet scent filled the air. The place hadn’t changed much over the years. The fake cakes they had on display were different, changing with the times, showing popular themes, but the classics remained on a high shelf near the ceiling.
One of his earliest memories was coming here with his dad and Jimmy to pick out his birthday cake. His dad had hoisted him up on his shoulders and told him to pick any cake design he wanted. He couldn’t have been more than four or five. It wasn’t long after his mom had been killed, but the memory was such a happy one. He didn’t remember feeling sad.
That realization made him feel crappy.
No one came from the back, so he called out, “Hello? I’m here to pick up a cake.”
From the back room, with her head down, she came toward him.
“Cupcake,” he whispered.
She moved to the counter opposite him and turned her back to dig through a stack of order slips. Her reddish-brown hair trailed down her back in a ponytail. Without any greeting, she asked, “Name?”
“O’Malley.”
She spun with the pink slips in her hand. Her light blue eyes were wide, and the sprinkling of freckles across her nose reminded him how cute she was.
“You’re back,” he said.
“Another cake for O’Malley?”
He lifted a shoulder. “There are five of us.”
“It’s good to know you’re not eating all this cake. I was beginning to think you had a wicked sweet tooth.”
“Uh, your cousin Moira told me you went back to Ireland.”
The papers in her hands crinkled, and a blush swept across her cheeks. “I did.”
“Are you staying long?”
“I’m not sure.” She focused on the slips, flipping through them, looking for his order.
When she found it, she pulled it from the stack and looked up. She waved it at him with a smile. “I’ll be right back.”
She disappeared to the back room, and Tommy sucked in a deep breath. This was it. He had another chance. All he had to do was open his mouth.
Why hadn’t Moira said anything? She knew he had a thing for her cousin. Maybe she was the one who’d put Jimmy up to making him get the cake. That definitely sounded like a Moira move. But to get Jimmy involved, that took skill. Moira was obviously better than he’d given her credit for.
Deirdre returned carrying a box. She slid it on the counter between them and lifted the lid. “Here you go.”
He barely glanced at it. No one would care if something was misspelled. His gaze locked on hers as she lowered the lid.
“Would you like to go out sometime?”
She stared for him so long, he began to wonder if he'd really spoken aloud.
“Uh . . . I have a boyfriend.”
“Oh.” The disappointment hit him hard. Again, he had to question why Moira wouldn’t tell him. This was the kind of pertinent information you gave a guy before he made a fool of himself.
“Your order is all paid for.” She nudged the box forward so he’d take the hint.
He scrambled for what to say to ease the tension. “Maybe you’d like to go out and do some sightseeing. As friends. You’re new to Chicago, and I could show you around.”
“Maybe.” Her eyes shifted away. It seemed no matter what he said, he made her nervous.
“Are staying with the O’Learys again?”
“Yes.”
“I’m right across the street. Stop by any time.”
She nodded and he took the cake from the counter. Not quite the answer he was looking for, but at least she hadn’t totally shot him down. She didn’t seem completely uninterested.
But boyfriend? 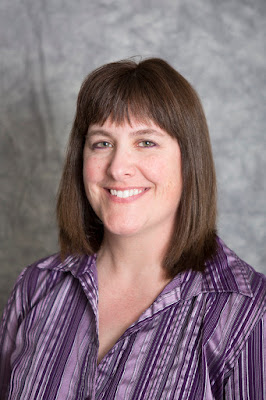 Shannyn Schroeder is the author of the O’Leary series, contemporary romances centered around a large Irish-American family in Chicago and the Hot & Nerdy series about 3 nerdy friends finding love. Her new series (For Your Love) will release this summer with the first title Under Your Skin. When she’s not wrangling her three kids or writing, she watches a ton of TV and loves to bake cookies.

Playlist for Through Your Eyes
By: Shannyn Schroeder
**NOTE for blogger – I’ve included both the link to the Youtube video as well as the embed code in case you want to include it.
When I start thinking about writing a book, it always starts with characters. I let the ideas for the story ramble around in my head for a while until I get a feel for the story. I do a little bit of character development – just their names and personalities. Then I create a playlist.
The playlist is one of the most important pre-writing things I accomplish because I listen to it nonstop while I develop my characters and their story. I listen to it so much, that my kids usually complain, “This again?” every time they get in the car. The playlist sets my mind into the book and the characters. Even if by the time I’m done writing, the lyrics don’t match who and what I’ve written, the music will always bring me back into the story.
Sometimes, when I’m done with a book, I forget about the playlist. Not Tommy’s though. Tommy is the hero in Through Your Eyes and since I wrote the book without having a title, the playlist is simply called “Tommy.” I love the songs on this list and I think they still do a good job of representing my characters and the feel of the story.
If I had to choose one song to stand as the theme song, it would be “Rose Tattoo” (it gave all of my kids earworm and they couldn’t stop singing it – even though they didn’t like it)
1. “Rose Tattoo” by Dropkick Murphys

2. “That Look” by Aaron Watson

3. “Then I Met you” by The Proclaimers

4. “The Galway Girls” by Steve Earle

6. “Not a Bad Thing” by Justin Timberlake

9. “Two Is Better Than One” by Boys Like Girls w/ Taylor Swift

a Rafflecopter giveaway
at 22:23