REVIEW: A NEW LEASH ON LOVE by DEBBIE BURNS 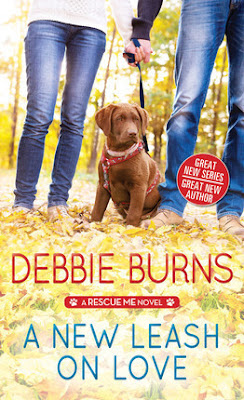 In A New Leash on Love (Rescue Me #1) by Debbie Burns, Megan Anderson is passionate about her work running a shelter, so when Craig Williams comes in needing to drop off a new puppy, she can't help but unleash her fury to the situation on him, especially since the shelter is already filled to capacity with animals. Luckily, Craig will never have to see her again, so her attitude shouldn't bother him. Still, her fiery passion sparked something inside of him; something that makes him want to get to know her. Will Craig be able to convince Megan to give him a chance, so they can both have a second chance at love?
What a charismatic and delightful read Ms. Burns has penned in this first book of her Rescue Me series, which enthralled me with its fast-paced storyline, fascinating main and secondary characters, and a gratifying ending that illustrated how everyone deserves a second chance at love, most especially Craig as Megan worked wonders with her kind and compassionate nature to get him to start living again. The way this story started had me sympathizing with the hero, as the decision he's made isn't an easy one, but it's one that had to be made.
As for the dialogue, it was well-written and a wonderful combination of teasing banter and intense moments due to the main characters back stories with the hero suffering a terrible loss that cost him his marriage and the heroine resenting her mother for personal reasons relating to her father. Will they both be able to overcome the hurts of their past to be together? Will Megan be able to help the hero find a way to reconnect with his children? Since both his kids, but most especially his son has been lost and unreachable in his grief.
Furthermore, both the main characters were riveting and I loved their growing relationship. Craig isn't ready to move on, but he can't deny the strong chemistry between them, no matter how hard he tries. I also liked how the hero was determined to help his son move past his grief, and that he allowed Megan to help with the use of the animals at the shelter and the fun that can be had when interacting with dogs. While Megan, she's so passionate when it comes to her work and I loved how she helps Craig's children with everything they're going through after the loss the family suffered. I also liked the growing bond she shares with a dog she rescues. It was adorable, as the dog needed someone like Megan that could give it the love and attention the dog deserved.
Overall, Ms. Burns has penned a remarkable and heartwarming read in this book where the chemistry was off-the-charts and just kept getting more intense every time the hero and heroine interacted; and where secrets have a way of coming out that can make or break a relationship. The way this story ended was completely satisfying, as Craig is lucky to get a second chance at love, especially when he learns of the heroine's surprise. How could he not want to make their relationship permanent? I would recommend A New Leash on Love by Debbie Burns, if you enjoy the second chance romance trope or books by authors Roxanne St. Claire, Debbie Mason, Susan Mallery or Donna Alward.

BLURB
When Craig Williams draws the short straw and has to take his daughter’s adorable new puppy to a shelter after the holidays, it’s just another painful episode in the fall-out of a miserable divorce. He needs to pick up the pieces of his life, and, after a fiery confrontation with Megan Anderson, the young woman running the shelter, he wants to put the whole episode behind him. However, when he keeps finding new ways to reconnect with her, he realizes Megan’s compassionate and caring nature just might be the perfect salve for his broken heart.
BUY LINK:  Amazon
at 21:24