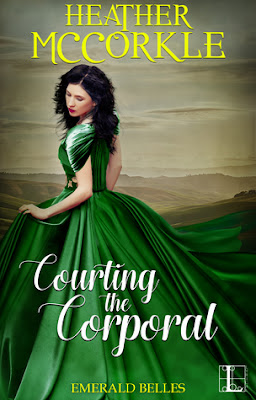 In Courting the Corporal (Emerald Belles #2) by Heather McCorkle, Catriona O'Brian is ready to start over and what better place to settle down than California. However, she needs an escort to travel with and Corporal Patrick 'Rick' Fergusson is perfect for the job. Yet, Catriona and Patrick's journey isn't easy, especially since someone doesn't want Catriona to achieve her dream of starting a winery. Will Patrick be able to keep Catriona safe, or will their chance at happy ever after be ripped away because of someone conspiring against her?

Historical Romance is not a sub-genre of romance I read a lot of, but when I do, it's because the blurb has enticed me enough to want to read the book. However, it wasn't just the blurb that had me choosing to read this story. It was also the recommendations I've had from other book friends to read something by this author as well as the cover and title, which had me hoping that the heroine would get her man. The way this story started had me liking the heroine immediately, as she's been through so much and is determined to have a fresh start in order to follow her dream. However, it was from the moment the hero and heroine came face-to-face for the first time in this story that made this book a real page turner for me, as neither are all that friendly towards the other. The question is - is it because there's an instant attraction they're not ready for?

As for the dialogue, it was powerful, emotional and I liked how it shows the characters have overcome a lot, despite their painful back stories. The heroine had it tough with her husband, but she's a survivor, which is proven by how strong and brave she is when it comes to the trouble they face on their journey. I also liked her feisty attitude and how she proves that she's capable of taking on the bad guys if needed. Yet, what I enjoyed most of all about the heroine was her willingness to stick with Patrick through thick and thin, even when she has every reason to want to run and hide in a moment where he seems out of control with memories of the past.

While the hero, he's been through so much in his life with being a soldier in the war. It isn't easy for him reliving the memories, and I could sympathize with him in the moment where he believes he's lost the heroine's trust. Moreover, I liked the playful banter at times between the hero and heroine, as it shows their growing relationship is starting to tip towards them liking each other, instead of disliking each other like it seemed they did when they first met. I also liked how protective the hero was of the heroine, even though it's palpable he didn't need to be. Still, he proves he's the complete opposite to her ex.

Overall, Ms. McCorkle has penned an incredible read in this book, where the chemistry was palpable, fervent and very enjoyable to read, because these two were so deserving of their happy ever after, especially after what they've been through in the past. The way this story ended had me on the edge-of-my-seat due to the danger they face. Will they come out on top of the bad guys? However, in saying that, I liked how things turned out for Rick and Catriona, because they're meant to be together. Moreover, the epilogue made this story very interesting, as Catriona's friends are just as strong and brave as she is and I liked how they face danger head on. I would recommend Courting the Corporal by Heather McCorkle, if you enjoy Historical Romance, second chance romances or books by authors Tara Kingston, Callie Hutton or Erica Ridley.

The Civil War has ended, but for Corporal Patrick “Rick” Fergusson the battle rages on. Still haunted by what he witnessed on the battlefield, the earnest Irishman is heading west, seeking only to be free of the past. His services are in high demand; wealthy East Coasters in need of escort clamor to join him on the journey. But one client, a beautiful lady named Cat, disturbs Rick’s newfound equilibrium.

High society widow Catriona O’Brian is anxious to get to California, even if it means traveling with the handsome corporal who seems to dislike her so. Cat no longer seeks marriage; she has pinned all her hopes on making it to the west coast and starting her own winery. Between the elements, wild animals, and hostile natives, however, everything seems to be conspiring against her. Time and again, Rick comes to her rescue. And soon, the independent lass discovers that her biggest obstacle may be the longing of her own traitorous heart.
BUY LINK:  Amazon
at 20:00