REVIEW: TO WIN HER SMILE by MACKENZIE CROWNE 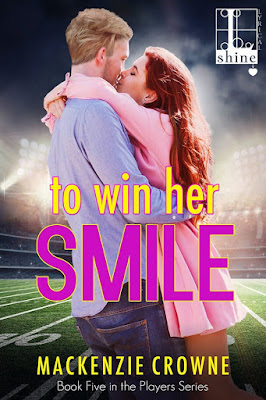 In To Win Her Smile (Players #5) by MacKenzie Crowne, Baroness Piper Darrow needs money and needs it desperately before she loses everything important to her. So, when she's offered the chance to take some photos for the Manhattan Marauders, she accepts the opportunity. However, it means spending time in Wyatt Hunter's company, the charming and handsome star player for the Marauders. Will she give into the strong chemistry that bounces between them, or will things that happened in her past keep her from getting involved with Wyatt?

Ms. Crowne scores a touchdown with any sports romance she writes with her ingenious and utterly beguiling style of writing, and this fifth story ends her Players series with a bang. In other words, it was a remarkable and marvelous story that had me hooked from the very beginning until the very end. The way this story started had me loving the hero immediately, as he's a cocky, confident sports hero that's feeling the pressure of whether he and his team are going to win or not until something disastrous for Piper while miraculous for Wyatt happens.

The dialogue was well-written, entertaining and I loved every moment of it, because it's a perfect combination of intense dialogue due to the main characters back stories and playful banter between the main characters that had me smiling and chuckling throughout this story and shedding a few tears towards the end. Certainly, Piper knows how to wound Wyatt's ego, but luckily he knows how to take her digs on the chin like the champ he is. Furthermore, the heroine is resilient, courageous and I liked how determined she was to solve her problems on her own. No way can she accept help from anyone else, especially not from Wyatt because she doesn't need another scandal to surface like the one in her past.

While Wyatt, he is one of the best heroes I've read lately. His back story and what he goes through with his family throughout this story isn't easy for him. His father is a total jerk that deserved every bit of Wyatt's wrath when it came to the hero's relationship with Piper and making certain his father kept his nose out of Wyatt's personal life. I also liked the close relationship Wyatt had with his sister. Then again, they'd have to be close to survive being in the spotlight and under constant scrutiny because of who their father is. Then there's the nickname the hero has for the heroine. I loved every time he called her it because of her reaction and what a guess it was, considering her title.

Finally, Ms. Crowne has penned an incredible read in this book where the romance was scorching and had me thinking Piper is one lucky woman to have the attention of such a great guy. The way this story ended had me a tad emotional because of what happened between Piper and Wyatt to tear them apart, but I liked how Wyatt made things right between them. Certainly, he does things with style and flamboyance. How could what he's wearing not tempt her, especially when it might mean he's going commando? However, it was the epilogue that wrapped things up splendidly, because of Wyatt's surprise for Piper. How did he manage to get something that was so precious to her back? I would recommend To Win Her Smile by Mackenzie Crowne, if you enjoy sports romance or books by authors Sawyer Bennett, Toni Aleo, Kelly Jamieson or Jami Davenport. I would also highly recommend this entire series, because they're all fantastic reads.

BLURB
When sultry British Baroness Piper Darrow falls on desperate times, she needs a diversion—and cash. As a talented photographer, she jumps at the chance to travel to the U.S. for a Manhattan Marauders football event. But she gets more than she bargained for when buff quarterback Wyatt Hunter’s errant pass lands…in her face. And when it results in Wyatt’s comeback of a lifetime, the superstitious athlete is convinced Piper is his good luck charm . . .

With his sights on the Super Bowl, Wyatt will do anything necessary to keep Piper close. The fact that she’s a feast for the eyes is a bonus. And as they get closer, he discovers that beneath her proper English surface is a sweet, sexy seductress. Soon the notorious playboy finds himself genuinely smitten, and surprisingly open to love—until his powerful family uncovers something about Piper that threatens to shatter his trust. Now he’ll have to decide whether to team up with his fears, or his heart.
BUY LINK:  Amazon
at 23:30