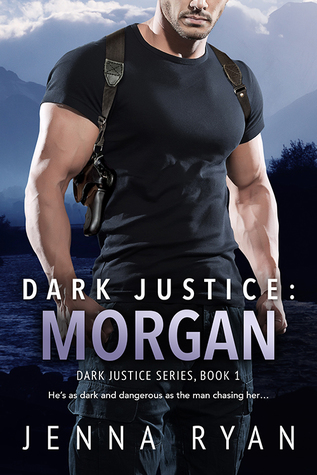 In Dark Justice: Morgan (Dark Justice #1) by Jenna Ryan, Amber Kelly and her sister entered the witness protect program after Amber agreed to help the FBI bring down Owen Fixx, the ruthless weapons and drug dealer her sister was married to. But when her sister, Rachel, leaves the safety of the witness protect program, Amber finds herself with a target on her head. Luckily, Gage Morgan comes to her rescue before anything too sinister can happen to her. Yet, with the danger closing in and Amber not knowing what's happening with her sister, will Gage be able to keep her safe or will Amber find herself in the hands of those wanting to end her life and lose her chance at happy ever after with Gage?

What a wild and thrilling ride Ms. Ryan takes readers on in this first book of her Dark Justice series where the main characters need to stay one step ahead of the bad guys, if they're to get their happy ever after. The way this story started with prologue sets the fast pace of this story with Amber having to deal with her sister in hopes of keeping the two of them safe. Will Amber be capable of getting them out of the trouble they find themselves in? However, it was from the moment that Morgan and Amber come face-to-face for the first time in this story that had me amused by Amber's courage and her determination to stand up for herself in case Gage turns out to be a bad guy. Will Gage be able to win the heroine over and prove that he's one of the good guys?

As for the dialogue, it was intense due to the main characters back stories and the actions and ruthlessness of the bad guys to get to Amber. Truly, there were a few spine-tingling moments and a lot of edge-of-your-seat moments that made this story a total page turner and had me hooked, as there are some close calls with the bad guys. Will Gage be able to keep Amber safe? How are the bad guys continually finding them? Moreover, I loved whenever the hero and heroine conversed, as the heroine challenges him, especially when it comes to his past and why he does what he does and is no longer a cop. What is so bad in his past that he doesn't like to talk about?

Both the main characters were charismatic and well-developed, and so were the secondary characters, even though I thought Amber's sister was selfish, naïve and flighty. At times, I couldn't understand why Amber cared so much about Rachel when there was no way her sister would go to the lengths the heroine was going for her. Furthermore, the heroine is resilient, courageous and I liked how determined she was to get her sister back, even knowing her sister was probably being used as bait. I also liked how much of a challenge the heroine provided the hero when it came to protecting her and that she was just as protective of Gage. No way could she walk away if there was trouble.  While the hero, he finds it hard to trust after being betrayed in the past, yet he's good at what he does, and I liked how far he was willing to go to keep the heroine safe. I also liked how confident he was in his skills and that he handled everything thrown his way including the betrayal of those he thought he could trust.

Overall, Ms. Ryan has delivered an enthralling and action-packed read in this book where the chemistry between this couple was intense and the ending had me concerned for the main characters as they face off against the bad guys. Will they come out on top? Will Owen Fixx finally get taken down? However, what I liked most of all about the ending is how things worked out for Gage and Amber. Finally, he's found a woman he can trust completely. Yet, it was the epilogue that left me looking forward to more of this series. What will happen next for Morgan, Amber and Rachel? I would recommend Dark Justice: Morgan by Jenna Ryan, if you enjoy romantic suspense; the sexy protector trope; or books by authors Kimberly Kincaid, Scarlett Cole, Kaylea Cross and Rebecca Yarros.

After attempting to help the FBI expose a ruthless weapons and drug dealer, Owen Fixx, Amber Kelly enters the Witness Protection Program. Unfortunately, her sister, who was once married to said drug dealer, is forced to join her—key word, forced. When Rachel grows tired of their new life and runs off with a local man, a nightmare ensues for Amber.

The only person who can help her is Gage Morgan, an edgy former police officer. The mysterious and compelling Gage must convince Amber that he is not only on her side, but he is also her best bet to stay alive.

Amber wants her sister back. What she doesn’t want is to be attracted to her sexy new protector. But in the haunted Smoky Mountains of Tennessee, desire trumps logic. And it leaves a smoldering trail for Fixx’s gunmen to follow.

Amber felt her inner feline rising and offered him a slow smile. “Do I look like a princess to you?”
“No, you’re a siren. Beautiful, dangerous, and scary as hell to any man with functioning genitalia.”
Her smile faded. “That light behind us is creeping closer.”
“Road’s improving.”
“Not that I’ve noticed.” Amber turned in her seat and almost bit her tongue off when the front tires struck a rock.
“Can we lose him?”
“Oh, we can do a lot better than that.” Reaching back, he grabbed her pack and dropped it in her lap. “We’re on a high point of land. Narrow road, no guardrails. There’s a canyon on our left. I’m going to slow down at the next bend. When I tell you to jump, tuck and roll. When you stop, head for the trees. Take this.” He handed her what looked like a small cell phone. “It’s a comm link. It has a one-mile radius. Keep it switched on, and I’ll find you.”
Never in her life could Amber recall having so many instructions fired at her in under fifteen seconds. “Are you sure—” she began.
But he cut her off with a firm, This is as slow as it gets, Snowbird. Go. Now.”
It must have been his tone. Either that, or she’d gone as crazy as he obviously was. Amber grabbed the link and her pack, shoved the door open, and jumped.
Her martial arts classes had taught her how to fall without injuring herself. However, when she factored in the momentum of a moving vehicle, everything she’d learned about a safe landing flew from her head. She hit hard, tumbled, and wound up on her stomach with her face buried in a patch of wet leaves.
“Ouch,” she mumbled.
She struggled to slow her spinning mind as she rolled over. A series of crashes reached her from the road ahead. The sound penetrated her mental haze. It also got her moving.
Head for the trees, Gage had said. Which trees? There were an awful lot of them on this side of the road.
Working herself into a crouch, Amber switched on the link and waited for the light to blink green. When it did, she zipped it inside her pocket, hoisted her pack, and struck out for the woods.
She heard a final crunch of metal on rock and knew exactly what Gage had done. He’d shot his truck over the edge of the cliff into a fathomless canyon where no one in their right mind would dare venture at night. If there happened to be a lake at the bottom, so much the better.
How long would the diversion last, Amber wondered as she ran. Two or three hours? Until morning?
A horrible thought suddenly occurred to her. Halting, she spun to look back. Gage’s truck had gone into the canyon. But what if it hadn’t been empty when it left the road? 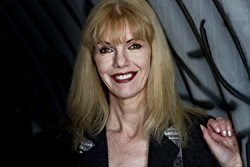 Jenna Ryan was born in Victoria, British Columbia, Canada, but spent her childhood in several different areas of the country. She began creating stories before she could read. Growing up, romance alone had a strong appeal, but as it turned out, romantic suspense was the perfect fit. After all, what could be better than adding the darker elements of a mystery to a romantic relationship? And, oh, the fun of those secondary characters. Over the years, she has worked in several different industries, including modeling, interior design and travel, however, writing has always been her passion - even if she didn't go about it in the usual way. She earned a degree in Creative Writing from the University of Victoria in British Columbia and currently lives in a semi-rural setting fifteen minutes from that city.