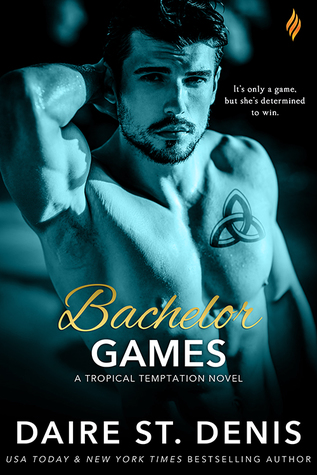 In Bachelor Games (Tropical Temptation #3) by Daire St. Denis, Becca Evans is a sister that would do anything for those she loves, so helping Grace achieve her best in the beauty contests/pageants she enters hasn't been a hard ship. But with her latest contest having the prize of a date with Calum Price, America's most eligible bachelor, Becca's not sure how she can help Grace win when she wants the prize all to herself. However, when things become complicated and Becca finds her loyalty being tested, will Becca choose her sister over the man she's coming to love or will she finally realize that love and happiness is worth fighting for?

There was a lot to like about this story, but the heroine's altruism when it came to pushing for happiness between her sister and Calum just annoyed me, especially considering the way this story starts sets the fast-pace of this story and definitely had me flipping the pages quickly wanting to know whether Becca would choose her happiness for once and allow her sister to be in charge of her own life and happiness. Will Becca give Calum a chance? Will Calum be able to convince Becca that she deserves love just as much as anyone?

As for the dialogue, I really enjoyed how this story started with what happens between Becca and Calum and how it progresses between these two that shows off their great chemistry and red hot romance. Certainly, these two are meant to be together, if Calum can convince Becca that she's the one he wants. Furthermore, I was really intrigued by the hero and heroine's back stories, as the hero has done really well for himself and I liked how far he was willing to go to achieve the deal he's looking to make. I also liked how tenacious the hero was when it came to winning the heroine's heart, which isn't easy, because she's always put her sister's happiness ahead of her own. Something that needs to stop, considering all she's achieved for her career, which is proven by the fact she's moving on to bigger and better things. Will the heroine finally realize that her sister can take care of herself, especially considering Grace is older than Becca?

Overall, this author has penned a very hot and riveting read in this book where the chemistry between this couple was instant the moment they met; the romance full of exquisite heat and passion because Becca loves Calum to experiment; and the ending had me absolutely captivated by how far Becca and her sister are determined to go to right a wrong from the past and get revenge on someone that hurt the heroine. I also liked how things worked out for the hero and heroine, because Calum will do anything to prove to the heroine that love is worth fighting for. I would recommend Bachelor Games by Daire St. Denis, if you enjoy the mysterious strangers trope or books by authors Cathryn Fox, Suzanne Rock, Samanthe Beck and Rebecca Brooks.

Now, she’s looking at another pageant—at a resort in the Caribbean. The prize? A date with America’s most eligible bachelor, Calum Price. For Grace, it would be the ultimate coup—landing a billionaire. Unfortunately, Calum seems to like Becca better...

Still, she’s determined to help her sister win. Calum doesn’t have to know that she’s the brains behind the beauty, the voice behind the veil, the finger behind the sexting...

But when things go too far, Becca must decide where her loyalty lies—with her sister...or the man she’s falling in love with.