REVIEW: ONCE A CHARMER by SHARLA LOVELACE 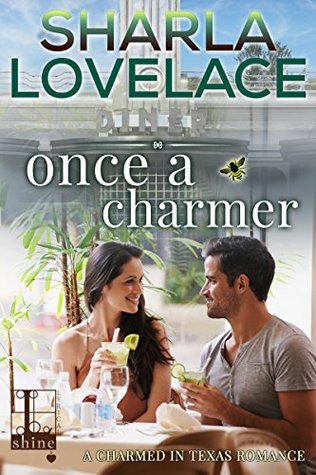 In Once a Charmer (Charmed in Texas #3) by Sharla Lovelace, Allie Greene and Bash Anderson have been best friends for years, but lately Allie has been thinking of Bash as more than just her friend. With things getting weird between her and Bash and Allie's livelihood threatened because of something foolish her dad did, Allie doesn't know what she'll do. Yet, when she finds herself partnered with Bash for the town's Honey King and Queen contest, they become closer than ever to the point where Bash will put their friendship on the line for them to become more. Will Allie break his heart or will she realize that her best friend is her Mr. Right?

Ms. Lovelace writes small town romances that are charming, filled with plenty of emotion that a reader can feel along with the characters, and this third book of her Charmed in Texas series was a wonderful and riveting read that made me laugh and made me want to cry because of not only what Allie goes through with Bash and their friendship being strained then moving to uncharted territory, but because of what is happening with Allie's livelihood and what happens to someone the hero and heroine love. The way this story started had me sympathizing with the heroine, because of something her dad did in the past that could cause her to lose something important to her. Will she find a way to get back what belongs to her?

As for the dialogue, it was well-written and very entertaining from start to finish, as the hero and heroine get their friendship back on track and then become so much more; the heroine deals with a complicated situation when it comes to her livelihood; and Allie deals with her daughter when it comes to life and love. Will the heroine's daughter listen to her advice? Will Allie's daughter finally realize that the heroine sees her as the best part of her life? However, there were also some really good light-hearted moments throughout this story, especially as Allie and Bash work together for the town's Honey King and Queen contest; and when Allie meets someone that can help her situation for the better.

Both the main characters were captivating and I loved how their relationship had it's up and downs, as they decide whether a relationship can work between them, and if they try and it doesn't, whether they can still be friends. Moreover, the heroine is strong, brave and I liked how protective she was of her daughter, as she wants better for her and doesn't want her daughter to end up in the same situation she did at her age. I also liked how feisty she was when it came to fighting for something that was important to her, even though it seemed hopeless in the way that things might not work out as Allie hopes. While the hero, he's hard-working, confident, doesn't back down from a challenge and I liked how protective he was of Allie and her daughter. They're family to him and he would do anything for them, which is proven by his determination to help her daughter when she gets herself into a spot of trouble.

Overall, Ms. Lovelace has delivered another fantastic read for this series where the chemistry between this couple was intense and undeniable; the romance took a while to move from platonic to physical intimacy, but was well worth the wait, as Bash shows Allie how precious she is to him; and the ending had me completely hooked, as Allie realizes that Bash is her Mr. Right and taking a chance on being with him is worth the risk of losing their friendship if things don't work out. I would recommend Once a Charmer by Sharla Lovelace, if you enjoy the friends to lovers trope or books by authors Crystal B. Bright, Stacy Finz, Kelly Moran and Cindy Kirk.

Charmed, Texas, is a close-knit small town where people’s dreams of love can come true. That’s not to say that some people aren’t still waiting, and dreaming . . .

By day, Allie Greene stays busy with her family diner, and keeping tabs on her teenage daughter. What’s really exhausting Allie, however, are the nights. Not that she minds Bash Anderson unbuttoning her naughty desires—if only in her dreams. But what was he doing there at all? He’s her best friend, and a father figure to her girl. Talk about awkward. Talk about OMG-heat-and-fireworks that are flipping fifteen years of normal upside down. And now, when Allie needs him as a friend more than ever, logic doesn’t stand a chance against his lips and irresistible deep-blue eyes . . .

Sure, Bash has fantasized about Allie, but there’s no way he’d act on it. She and her daughter are the closest thing to family he’s ever known. With the exception of one drunken moment fifteen years ago, he and Allie have stayed on this side of the line—until that impulsive kiss of hers knocked him on his butt. That’s just one hurdle. Not only does Allie need Bash’s help to save her diner, but his apiary is in trouble, too. To stir the pot further, they’ve been roped into vying for the town’s Honey King and Queen contest—a sweet event that’s making them closer than ever. Something’s bound to come undone. Bash just hopes it’s not the friendship he’s worked so hard to hold on to.