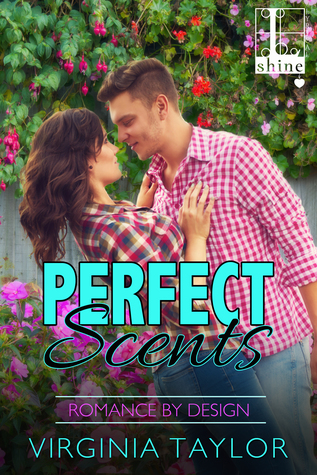 In Perfect Scents (Romance by Design #2) by Virginia Taylor, Calliope 'Calli' Allbrook needs the job she's taken in hopes of staying out of the limelight and to mend the broken heart she suffered when her ex took advantage of her and she lost everything. Now though, she's working hard and is determined to pay back the money she owes. If only she could stay away from her gorgeous neighbour and her desire to help him renovate his home to net him the best price. However, the more time Calli spends with Kell, the more she finds herself falling for a guy that's more interested in one-night stands than forever after. Will Calli give forever after a shot now that she's met her Mr. Right, or will Calli turn her back on their growing relationship because she's scared?

Having really enjoyed the first book of this series, I was looking forward to this second book of Ms. Taylor's Romance by Design series, and I've got to say that this book does not disappoint. Not only because of the intense chemistry between the hero and heroine, but because of their back stories that make these two so captivating and fascinating. The way this story started had me sympathizing with the heroine, as she's in a bit of a bind because of what her ex did. Will her ex end up paying for what he did, especially since her reputation was tarnished because of his actions and the media painting her as the bad guy? Will she ever be able to prove she wasn't at fault? However, it was from the moment the hero and heroine met that had me laughing, because of the hero's wrong assumptions when it comes to the heroine.

As for the dialogue, it was well-written and a wonderful combination of intense moments due to the main characters back stories and playful banter and actions by the characters that had me smiling and laughing, especially the moment where the hero realizes that Calli is not what he first thought. How could he be so mistaken when she looks the way she does? Moreover, the heroine is strong, courageous, sassy, hard-working and I liked how determined she is to repay her parents for all that they've done for her. I could also understand her need for secrecy, especially with everything that's happened to her in the past and because of who her family is. Yet, what I liked most of all about the heroine was that she took a chance on the hero, even though he's more of a one-night stand kind of guy than a man that believes in happy ever after.

While the hero, he's confident, has a nickname that proves he's good with the ladies but is the love-'em-and-leave-'em type, and I liked how driven he was when it came to his career and proving that he has what it takes to achieve his dreams, if he's given a chance. However, what I liked most of all about the hero was that he gave the heroine the benefit of the doubt when it came to her past and that he didn't judge her once he learnt the truth. Yet, what I liked most of all about the hero was how determined he was to get everything he wants in life on his own merit. That he didn't take advantage of who he knew and what they could for him, which is proven once he discovers more about the heroine.

Overall, Ms. Taylor has penned a delightful and riveting read in this book where this couple's romance was exciting and definitely does justice to this couple's intense chemistry; the secondary characters were just as entertaining as the main ones; and the ending had me totally enchanted by all that the hero has accomplished when it comes to the house he's been renovating and his job prospects. However, it was how things turned out for the hero and heroine that I absolutely loved, because Kell has to work all of his magic to win the heroine over, as she's stubborn when it comes to their future as a couple or whether they'll go their separate ways. I would recommend Perfect Scents by Virginia Taylor, if you enjoy the mistaken identity trope or books by authors Allison B. Hanson, Sharon Struth, Maggie Wells and Lindy Zart.

Two unsuspecting lovers stumble upon the blueprint for love . . .

Calliope Allbrook takes a job in lovely, sunny Adelaide, Australia, hoping to lose herself in her work as a balm for her broken heart. And if it weren’t for the handsome hunk renovating the house next door, Calli would never even have looked up from the garden she is designing for her latest client. But rugged Kellen Dee is just the cure the beautiful heiress needs. After all, he has no idea who she is, so he certainly won’t see her as a meal ticket. Then there’s the fact that Kell’s deliciously sexy—and incredibly good with his hands . . .

From the moment Kell takes her in his arms, he knows Calli is more than just a fling. Then the blue collar bachelor learns he’s not sharing his bed with just any woman, but the wealthy daughter of the man who could make Kell’s construction business a success—and Kell the kind of well-heeled man worthy of Calli’s love. But he’ll have to be careful his ambitions don’t trip up his heart . . .