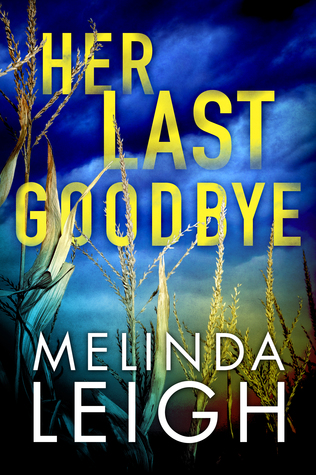 In Her Last Goodbye (Morgan Dane #2) by Melinda Leigh, Morgan Dane is determined to help prove that Chelsea Clark's husband had nothing to do with her disappearance. However, knowing it may be impossible to prove without help, she teams up with private investigator, Lance Kruger. But as they get further into their investigation, Morgan finds herself being pulled further and further into a dangerous game of cat and mouse with her as the mouse. Will she be able to keep herself and her family safe, or will the killer get what he wants -- Morgan?

Ms. Leigh is one of my go-to authors for romantic suspense, and this series is one that has me absolutely enthralled by the direction Ms. Leigh has taken each book so far. Most especially this book due to the gripping twists and turns this story takes that make it a total page turner. The way this story started was spine-tingling and had me wondering how far the bad guy was willing to go when it came to his evilness. How many women will lose their lives? However, it was from the moment that Morgan started investigating where this story had me hooked, because she's driven and unwilling to give up until she finds out everything to do with the case and that the women of the area are safe again.

As for the dialogue, it was intense due to this story being told by the bad guy's point-of-view as well as everything the heroine goes through while investigating to prove their client's innocence. Will she be able to keep her family safe? Will Lance be able to protect Morgan from the bad guy? Furthermore, I was totally charmed by the hero and heroine's chemistry and how resilient Morgan is. No way will she give up until she knows everyone is safe, especially her family. Yet, what I liked most about this book is how it kept me guessing as to who the person was responsible for what happened to Chelsea and the other women and how it totally took me by surprise at the end.

Overall, Ms. Leigh has penned another fantastic read for this series where the chemistry between Lance and Morgan is wonderful and special and shows that no one is more deserving of happiness than Morgan after her loss. The way this story ended had me totally captivated because of what Morgan and Lance did to get the bad guys. Morgan really is made of tough stuff. I would recommend Her Last Goodbye by Melinda Leigh, if you enjoy romantic suspense or books by authors Kendra Elliott, Mary Burton, Allison Brennan and Toni Anderson.

Young mother Chelsea Clark leaves the house for a girls’ night out…and vanishes. Her family knows she would never voluntarily leave her two small children. Her desperate husband—also the prime suspect—hires Morgan to find his wife and prove his innocence.

As a single mother, Morgan sympathizes with Chelsea’s family and is determined to find her. She teams up with private investigator Lance Kruger. But the deeper they dig, the deadlier their investigation gets. When Morgan is stalked by a violent predator, everything—and everyone—she holds dear is in grave danger.

Now, Morgan must track down a deranged criminal to protect her own family…but she won’t need to leave home to find him. She’s his next target.