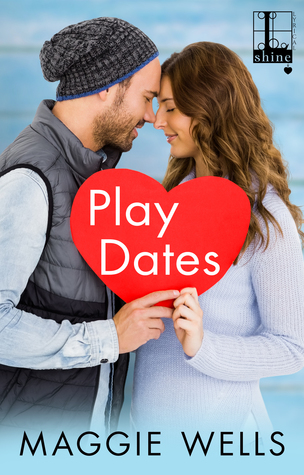 In Play Dates by Maggie Wells, Monica Rayburn is a woman that knows what she wants and what she wants is Colm Cleary. But the only way she believes he'll consider going out with her is because he thinks she's a mother. However, when the lies become too much and there's more and more chance of Colm uncovering her deception, will Monica be able to make things right between them or will she lose her chance at happy ever after?

Although I really liked how this book started and things getting out of control quickly with Monica's lies adding up, I found there were moments where I had to put this book down, as I couldn't handle the heroine's drama. Her obsession with being a workaholic and avoiding relationships was understandable because of her past, but with things turning out well for her sister in finding love, why wouldn't Monica want the same? However, in saying that, I absolutely loved the hero, his son and the hero's friends.

As for the dialogue, it was entertaining due to the main characters back stories, especially that of the hero, because of how he ended up a single dad. Yet, it was also entertaining due to the remarkable bond Colm and his son have as well as the strong bond Colm shares with his friends that has them teasing each other about women and setting each other straight when it comes to the mistakes they each believe the other is making. Then there's the close relationship Monica and her sister have and I could certainly understand why Monica's sister was concerned about what the heroine was doing. Will the heroine listen to her sister before it's too late?

Overall, this book offered plenty of promise in the beginning with the meet cute between Monica and Colm, but there were moments where I wanted to shake the heroine to knock some sense into her. Really, as if her lying wasn't going to backfire and what a way it did end up backfiring on her. It made me feel sorry for her, but in saying that, it also helped her realize what she wanted -- a future with Colm and his son. The way this story ended had me liking how desperate the heroine was to get Colm to give her another chance, yet it was how things turned out for them that made the ending of this story the best part because of what the hero does. Then again, I can't forget how adorable Colm's son was either. What a little cutie! I would recommend Play Dates by Maggie Wells if you enjoy the opposites attract trope or books by authors Sara Portman, Virginia Taylor, Allison B. Hanson and Kate Clayborn.

For single parents, life is often more diapers and daycare dilemmas than dating. But for three dads going solo, a little flirting can lead to a whole lot more than a fling . . .

Colm Cleary lost his wife just moments after his son Aiden’s birth, and it’s been just the two of them ever since. Dating is his very last priority—until he spots gorgeous Monica Rayburn on the playground with her little girl. Suddenly finding a woman sympathetic to the demands of single parenthood seems like a great idea—especially if they agree to a no-pressure, no-strings date . . .

Dazzled by the hot “Saturdaddy” who asks her out, Monica doesn’t get around to mentioning that little Emma is her niece. She’s in commodities, not children. A gambler to the bone, she’s going to take a chance on an adult evening with Colm—and worry about the details later. But when their casual connection deepens into something more solid, the truth will have to come out—and both Colm and Monica will have to throw caution to the wind to hold on to a future together . .