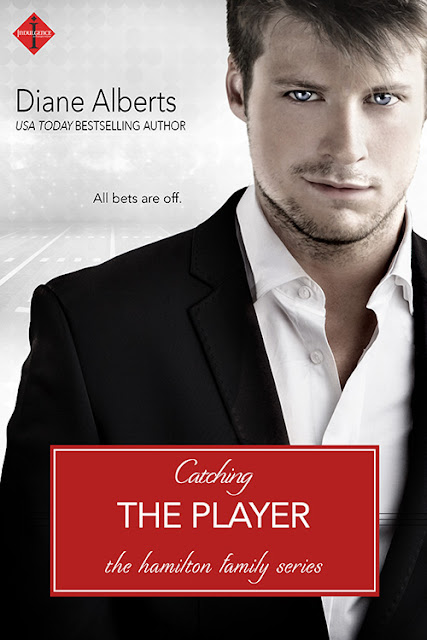 In Catching the Player (Hamilton Family #3) by Diane Alberts, making a bet with her brother was a bad idea, even though it leads to her singing horribly to NFL's most handsomest bachelor, Wyatt Hamilton. However, never did she imagine Wyatt would ask her out just when she's decided to start living again instead of hiding behind her past because of what her ex did to her. Accepting is a good idea in theory, but once they begin hanging out, Wyatt begins to see that there's more to life than football. Will he be able to convince Kassidy to take a chance on him, or will the unthinkable happen to send Wyatt running?

What a fantastic addition to the Hamilton series Ms. Alberts has delivered in this book where the title definitely fits the story with Wyatt being an NFL player and being a total player when it comes to women. However, in saying that, it was the incredible main characters and compelling dialogue that made this story a real page turner for me. As Wyatt is so focused on NFL and believes a relationship is impossible, yet he can't seem to stay away from the heroine. Will Wyatt realize that love and happiness are just as important as his career? Will he realize that having Kassidy in his life doesn't mean he can't continue to be one of the best in his sport?

Right from the moment the main characters met, I was absolutely charmed by this story, as Wyatt offers the heroine the chance to begin living her life again instead of hiding after the disaster of her last relationship that has left her wary of men. Kassidy is also courageous in taking a chance of Wyatt, even knowing he's a player. I also liked the tight bond the heroine shared with her brother that makes him protective of her. While the hero, he's confident, a smooth talker, focused when it comes to his career, and I liked how close he is with his family, which is proven by the advice they give him and what they do at the beginning for him that leads to his meeting the heroine. However, what I liked most of all about this couple's growing relationship is how the heroine helps the hero when it comes to negotiating his contract and how determined the hero is to win the heroine over once he realizes how much she means to him.

Overall, Ms. Alberts has delivered another wonderful and captivating read for this series where the secondary characters are just as riveting as the main ones; the chemistry between this couple was incredible; the romance was hot and shows how lucky Kassidy is to find a great guy that she can put her trust in again; and the ending had me loving the hero more than I already did because of what he does to win the heroine back after things went awry in their relationship. Truly, it was endearing that Wyatt would go so far to look like a fool to win Kassidy back. Will his theatrics end up on social media? However, it was the epilogue that wrapped this story up perfectly, because of how far Kassidy and Wyatt have come in their relationship and how much love there is between them. I would recommend Catching the Player by Diane Alberts, if you enjoy the opposites attract trope or books by authors Kira Archer, Jenna Bayley-Burke, Regina Kyle and Miranda Liasson.

Kassidy Thomas decided to stop hiding behind her past, and start living, but she didn’t quite bet on that start including her singing a horrible song in front of the handsomest bachelor in the NFL, Wyatt Hamilton. She also doesn’t think he’d then consequently ask her out on a date, but turns out when you’re actually living life…crazy things happen. He needs to win…

Wyatt Hamilton is a player in every sense of the word. Married to the game, he has no interest in relationships, love, or even second nights with the same woman. But from the second the girl-next-door beauty Kassidy knocks on his door to deliver a singing telegram, nothing goes as planned. He can’t stop thinking about her, and keeps showing up on her doorstep for more. That is, until the unthinkable happens… And all bets are off.