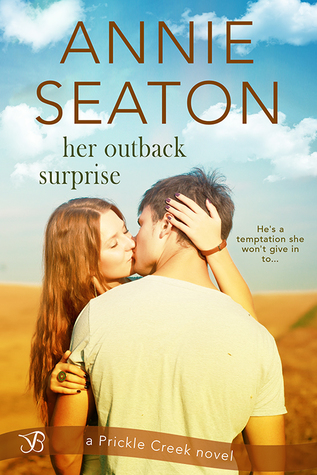 In Her Outback Surprise (Prickle Creek #2) by Annie Seaton, just over a year and a half ago, Liam Smythe, let the woman he loved return home to Australia. Now though, he's home from London and helping to run the family farm, but never did he imagine he'd run into Angie again. Still, he's not about to let his second chance with her slip away, even if he is planning to return to the city to chase his next big story as a reporter. Will Liam be able to win Angie back, so they can have a second chance at forever after; or is her fear of Liam leaving her again too high for her to give him another chance?

Having absolutely loved the first book of this series, I couldn't wait to read more about Liam and his cousins, because it seems none of them ever thought they'd head back to Prickle Creek. Yet, I've got to say that this book continues the series nicely with Liam determined to win back the woman he never should have let get away in the first place. Will Angie give Liam a second chance? However, it was from the moment where Angie and Liam come face-to-face for the first time in this story where things really got exciting, as both are surprised to see each other. Why is Liam back from London? Why has Angie moved to the small town where she works?

As for the dialogue, it was riveting and had me cheering for this couple's happy ever after, as it was palpable they were happy together in the past, and going their separate ways wasn't what Angie wanted but she had no other choice than to leave. Moreover, the heroine really surprised with her abiity to resist the hero, even though it's clear she still loves him. I also liked her enthusiasm for her job and that she would do anything to help an animal in need, which is proven by what she does for Liam's dog. Yet, what I liked most of all about the heroine was that she gave Liam another chance once she cleared the air about something he believed that wasn't true.

While the hero, he's done well for himself when it comes to his career and it's understandable why he would want to get back to chasing his next big story, because he's good at what he does, which is proven by what he does to help the townspeople with a problem. I also liked how determined the hero was to win the heroine over once he realized he can't let her go a second time. Yet, what I liked most of all about the hero is the close relationship he has with his family and that he would do anything for them, which is evident in the moment where his cousin convinces him to do something for her; something he has no idea of doing because he doesn't know the first thing about baking. Will he do his family proud when it comes to achieving something he never thought possible?

Overall, Ms. Seaton has penned another marvellous read for this story where the romance was on the sweet side; the chemistry was fantastic and had me determined to discover how things would turn out for this couple; and the ending had me enchanted by the hero's determination to show the heroine how much he wants her in his life. No way can he let Angie get away a second time. The first time was hard enough, even if he didn't realize it at the time. However, it was the epilogue that has me intrigued for the next book of this series. What is Jemima up to and what's she looking to do? I would recommend Her Outback Surprise by Annie Seaton, if you enjoy second chance romances or books by authors Amy Andrews, Sean D. Young, LE Rico and Rebecca Brooks.

Angie Edmonds is content with life in her small town. Being alone doesn’t bother her. Really. Until Liam Smythe, the man who broke her heart, shows up at her vet clinic with an injured puppy. Unfortunately, he's just as irresistible as she remembers. In an attempt to prove to him that she’s moved on, somehow a little white lie begins…

When Liam returns to help run the family farm, his enjoyment of the slow life in Spring Downs surprises him. After all, he’s used to the thrill of chasing the next big story. Running into the girl he's never been able to forget is unexpected, and he’s shocked to learn she’s getting married--to someone who's not him. She’s off-limits, but Liam can’t stop thinking about the gorgeous vet and what could have been. But convincing her he’s changed will be harder than finding a needle in a haystack.