REVIEW: GAME ON by LYNN STEVENS 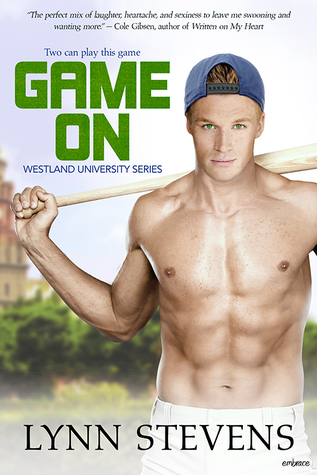 In Game On (Westland University #2) by Lynn Stevens, Olivia Dawson made a mistake when she cheated on her boyfriend at the time, especially since she ended up in the bed of her arch enemy, Devon Miller. Even worse, now they're competing for an internship at the one place Olivia has always wanted to work and both will do anything to get the coveted position. However, the more time Olivia spends with Devon, the more she realizes how wrong she's been about him. But when something happens and Devon doesn't take her side, will things ever be the same between them or is the trust they had for the other too broken for the pair to find their way back to each other?

Having enjoyed the first book of this series, I couldn't wait to discover more about the baseball team Devon plays on, how the drug scandal has affected the players and whether they can find a way to go out and play their absolute best. The way this story started had me amused by the heroine's reaction to where she is. Could she possibly find a way to get out of being where she is? However, it was the moment that the hero and heroine came together for the first time that had me absolutely hooked, as Devon is charming and there's plenty of chemistry between Olivia and the hero that just made me want to know how long it would take Devon to win the heroine over, despite their past that makes it palpable he's already won her over once.

As for the dialogue, it was very entertaining due to the main characters back stories that have Olivia determined to avoid Devon at all costs because he's her enemy; the one that she finds herself continually competing against and coming off second best more often than not. Will she ever win against him? Moreover, both the main characters were fascinating and I loved how determined Devon was to win the heroine over, no matter how many obstacles he had to face including Olivia's ex-boyfriend, whether the heroine can handle the truth of what the hero is keeping from her; and whether the hero trusts Olivia enough to see that she would never do anything to hurt him.

While the heroine, she's been through a lot and I liked that she fought for her future, even if her dad pushed her to fight for what she wanted to do when it came to college and a career. I also liked how smart and sassy Olivia is and that she can handle Devon when it comes to them conversing and him using his charm on her to make her realize that he's a good guy and not her enemy. It's palpable he likes her a lot. I also liked the way Olivia helped her friend with her relationship; a relationship her friend needed to realize was toxic. Yet, what I liked most of all about the heroine is her determination to do anything she can to prove she has what it take to be an exceptional engineer.

Overall, Ms. Stevens has delivered a fantastic read in this book where the chemistry between this couple was powerful; the romance wonderful, despite not going into a lot of detail; and the ending had me captivated because of how far Olivia is willing to go to help Devon and his friends and what she's willing to do to make things right between her and the hero since they belong together forever. I would recommend Game On by Lynn Stevens, if you enjoy New Adult romance; sports romances; the enemy to lovers trope; or books by authors Amy Daws, Stacy Borel, Alice Ward and Cindi Madsen.

Olivia Dawson doesn’t make mistakes. Unless those mistakes are a tall, broad-shouldered, cocky baseball player named Devon Miller. Devon and Olivia have been competing in their engineering classes since freshman year, and he seems to want nothing more than to get under her skin and shake her confidence. Unless you count that one time when he got under more than just her skin…

Now, they’re pitted against each other for a coveted internship that could open tons of doors for each of them. Only one of them can win. And they’re both ready to fight dirty if they need to.

Could Devon be playing for more than just his own gain—could he be after her heart?

Olivia is about to find out.