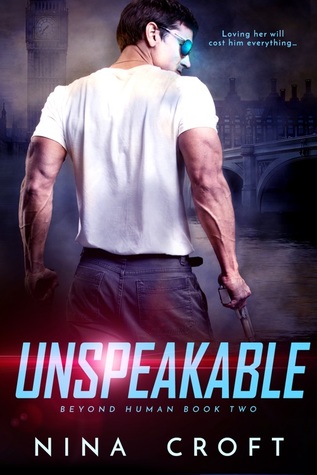 In Unspeakable (Beyond Human #2) by Nina Croft, Sadie Brooks isn't afraid to get her hands dirty, especially when it comes to finding those responsible for the deaths of her sister and a friend. However, when she discovers the man from her dreams is part of the organization Sadie and her friends are determined to bring down, she doesn't know whether to give him a chance or kill him. Choosing to use Ethan Weiland to find information on her captured friends is the only way, even if the others don't agree with her. Yet, the further into their investigation they get, the more danger closes in on them. Will Ethan be able to keep Sadie safe, or will their chance at happy ever after never happen?

The first book of this series is fantastic, but this story encompassing the enemy to lovers trope was an absolute page turner due to the main characters that have incredible chemistry, but are at odds because Sadie and her friends are out to destroy the organisation Ethan is a part of. Will they succeed or will Ethan see that the organisation his family has always been a part of are in the wrong and make things right? The way this story started had me totally engrossed and I loved how far the heroine was willing to go to get the hero's attention. Will Ethan give her a chance or will she force him to do something he wishes he doesn't have to? However, it was from the moment the hero and heroine met that had me absolutely captivated, as Ethan needs information and isn't afraid to do whatever it takes to extract the information from Sadie. Will exposure to Sadies's abilities put Ethan in danger?

As for the dialogue, it was well-written, yet there were also some light-hearted moments that had me charmed by this couple's growing relationship. Will Ethan be able to handle the truth about Sadie? Will he be able to handle all that has been kept from him when it comes to the organization? However, the dialogue is also intense and had me on the edge-of-my-seat when it came to the people coming after Sadie and her friends? Who wants them dead? Moreover, the heroine is resilient, tenacious and I liked how courageous she was when it comes to what happens to her due to the hero wanting answers. I also liked that she wasn't afraid to stand up for herself and the hero when it came to her friends because they weren't being fair to Ethan. Just because he's part of the organisation, it doesn't mean he had anything to do with what happened to them.

While the hero, it isn't easy to accept that the organization is as bad as Sadie and her friends are leading him to believe because of all they've been through, and yet, he's willing to help them since he wants to know the truth. Ethan is strong, brave and I liked how determined he was to discover what happened to Sadie's friends, even though things are bound to get dangerous when a select few know about what the organization has been up to. I also liked how far the hero was willing to go for the heroine when it came to protecting her. Will he be able to eliminate those that would make trouble for him as well as for Sadie and her friends?

Overall, Ms. Croft has delivered an utterly engaging read in this book where the paranormal elements of this story were enthralling; the chemistry between this couple was intense; the romance nicely-detailed and had me wondering when their relationship would finally go from platonic to physical; and the ending had me totally captivated by what the hero was willing to do to protect the heroine and the danger he faces. Will Ethan be able to get himself free of the danger, so he has a shot at happy ever after with Sadie? However, in saying that, I loved what happens that guarantees the hero and heroine's safety that made this story and this series really exciting and interesting. I would recommend Unspeakable by Nina Croft, if you enjoy paranormal romance or books by authors Rebecca Zanetti, Thea Harrison, Juliette Cross and Lisa Kessler.

Sadie Brooks grew up knowing she was different…special. And she thought the undercover work she did for the government was making a difference...making a better world. Then she discovered she was simply an asset—to be used or destroyed at whim. Escaping her government controllers, Sadie is determined to get her revenge on the organization responsible for the death of her twin sister—the Conclave.

Ethan Weiland has doubts about the Conclave but he’s never known anything else. Brought up from birth as the next hereditary leader, Ethan has never questioned his destiny. Until he comes face to face with a beautiful enemy who can read his mind and bring him to his knees with a thought. For the first time, Ethan sees a chance for redemption. When he’s in charge, he’ll be able to change things.