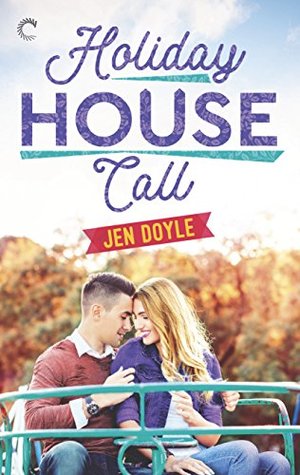 In Holiday House Call (Calling It #3.5) by Jen Doyle, Karen Carmichael never imagined she'd come face-to-face again with the guy she spent an incredible one-night with, but when he pulls her over for careless driving, she's not sure how she's going to talk herself out of the situation. Luckily, she doesn't have to do anything, but seeing John 'Tuck' Tucker does something she never thought possible. Will she take a chance on someone that risks his life for his job, something she swore she's never do; or will she walk away from the best thing that's ever happened to her -- the love of a good man?

Ms. Doyle can write any trope with a very high level of success, and she has again proven she's a master when it comes to contemporary romance. Really, right from the beginning, this story was highly entertaining, fast-paced and had me hooked from the moment the hero and heroine came face-to-face for the first time and both realize they know each other. However, it's the decision the hero has to make when it comes to Karen's careless driving that had me intrigued. What decision will Tucker make?

As for the dialogue, it was intense, well-written and I loved the banter between the hero and heroine, as they both decide whether they can take a chance on the other. Karen is concerned that Tucker has a dangerous job and isn't in the habit of trusting many people, especially men, which is understandable after all she's been through in her past, but I liked that she let Tucker in. He's one of the good guys and the sooner she realized that the better. Furthermore, I really enjoyed the dialogue between the main and secondary characters too, as Karen has a very close relationship with someone she works with; someone that is determined to lend advice when needed. Will Karen and Tucker listen to said secondary characters advice?

Both the main characters were compelling and I loved everything that Karen goes through, as decisions she makes get her off-side with people. Did she make the wrong choices in her role as a neurosurgeon? Moreover, the heroine is resilient, courageous, hard-working and I loved how determined she was to stand up for herself when it came to needing to defend herself against someone determined to cause trouble for her. I also liked how kind and caring Karen was and how she goes above and beyond for her patients, especially a patient that things could have ended up a lot worse for, if it wasn't for Karen and her brilliant skills. While the hero, he's confident, a good cop, and I liked how protective he was of the heroine. I also liked how determined Tucker was to win Karen over because they're good together and good for each other. Will Tucker's persistency pay off when it comes to his relationship with Karen? Will she realize that love and happiness can be a good thing with the right person before it's too late?

Overall, Ms. Doyle has delivered another brilliant and enchanting read for this series where the chemistry between this couple was strong and the romance illustrated how good these two are together and that Karen is lucky to have a guy as wonderful as Tucker in her life. The way this story ended had me crying happy tears because of someone determined to prove that Karen is a miracle worker and not the enemy; because of what Tucker does to prove to Karen that she's the one for him; and the conversation between these two about their future had me loving the sacrifices both were willing to make to be together. Yet, in saying that, I liked the decision they made because Karen belongs with Tucker. However, it was the epilogue that wrapped this story up nicely, as Christmas is a time for miracles and what's better than having love in their lives. I would recommend Holiday House Call by Jen Doyle, if you enjoy the opposites attract trope or books by authors Jen Frederick, Jennifer Bernard, Julie Brannagh and Kate Meader.

Dr. Karen Carmichael prides herself on being capable, optimistic and always in control. But even neurosurgeons have breaking points, especially as the holidays approach. When Karen finds herself on the side of the road, explaining to a cop that her less-than-stellar driving was due to stress and tears rather than too much booze, it's humiliating. When that cop turns out to be a one-night stand from her past, it's icing on the bad-day cake.

Officer John "Tuck" Tucker didn't expect to see Karen again after their night together. The circumstances may not be ideal, but convincing this beautiful, stubborn woman to get to know him with his clothes on is more fun than he could have imagined.

Karen swore she'd never fall for someone who risks his life for his job. She sees enough heartbreak at work without inviting it into her personal life, and she has no interest in becoming involved in the small town Tuck calls home. But despite valiant efforts to keep her walls up, her affection for Tuck is growing into something much stronger. With a life built around work alone looking less appealing by the day, Karen will have to take a leap of faith—and trust that Tuck will leap with her.