REVIEW: MAKE ME YOURS by REBECCA BROOKS 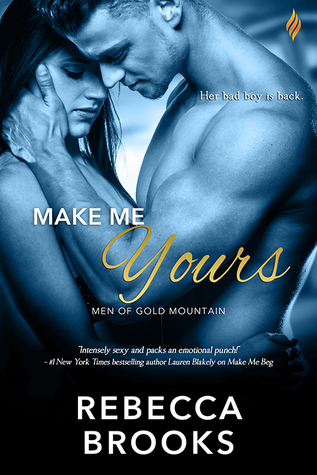 In Make Me Yours (Men of Gold Mountain #4) by Rebecca Brooks, Claire Collins loved Ryan Thomas so much, but she never expected to see him ever again, not after the way she left. She did the right thing for her unborn baby at the time, especially since she was never able to deny Ryan anything. However, as they get to know each other again, Claire has to decide whether she's ready to let Ryan back in after working so hard to move on. Will Ryan be able to convince Claire that he's changed and is ready for love, family and happiness, or will the unthinkable happen to make Claire send Ryan away?

Having just recently read the other books of this series, I couldn't wait to dive into this book, because I wanted to know so much more about Claire and why her relationship with Ryan went awry. What did he that tore them apart? And after reading this book, I've got to admit that this is the best book of the four in Ms. Brooks Men of Gold Mountain series, as Ryan does everything in his power to win back the woman he's always loved. Will Claire be able to forgive and start over since Ryan has clearly done all he could to overcome the things that drove Claire away?

As for the dialogue, it was intense due to the history between this couple, but it was also hard not to be affected by the emotions alongside the characters, as they cherish their second chance at forever after; find it within themselves to forgive the past; and earn redemption along the way. Well, Ryan does, as he realized how much he lost. Furthermore, the heroine was resilient, courageous and I liked how determined she was to take things slowly with Ryan, even though that plan didn't work out quite as well as she hoped. I also liked how good of a mother she was and that she was willing to give the hero a chance to get to know his daughter, even if they have an agreement about how much they want their daughter to know.

While the hero, he made so many mistakes when he was with Claire in the past, but he's managed to overcome so much since Claire left him, and I liked how well he's doing for himself in his professional life, considering all his rocker lifestyle once cost him. His relationship with Claire ending and his bandmates deserting him was hard, but I liked how hard he's worked to overcome his problems. I also liked how determined he was to prove to Claire that he's changed and that he would do anything to win her back, even if it meant sacrificing a career he's worked so hard for.

Overall, Ms. Brooks has penned another wonderful read for this series where the chemistry between this couple was intense; the romance fan-your-face hot because of Ryan's need for control; and the ending had me wondering whether this couple would achieve their happy ever after because of Claire's over-reaction to what she believes is Ryan being irresponsible again. Will she be able to forgive Ryan, considering what happened could have happened to anyone? However, in saying that, I loved how things worked out for this couple in the end, as Ryan will do anything to be with Claire and his daughter and I liked that Claire finally was able to be honest with her daughter about things she's been keeping from her. I would recommend Make Me Yours by Rebecca Brooks, if you enjoy second chance romances or books by authors Daire St Denis, Cathryn Fox, Samanthe Beck and Amy Andrews.

Claire Collins has always been good—except when it comes to bad boys. Or one bad boy in particular: a tattooed musician as skilled with her body as he is with his guitar. But he wasn’t ready to be a father, so she left him to raise their daughter on her own. Only fate had other plans, and suddenly, Ryan is back in her life, disrupting everything. This time, though, she’s determined not to lose her heart…even if she still craves his touch.

Ryan Thomas never expects to see Claire again—especially not in a small mountain town in Washington on the last show of his comeback tour. But when the lights come on, there she is, more beautiful than ever. One incredible night with her won’t be enough… But he’ll have to prove he’s not the man he used to be, if he wants to keep her—and his family—for good.